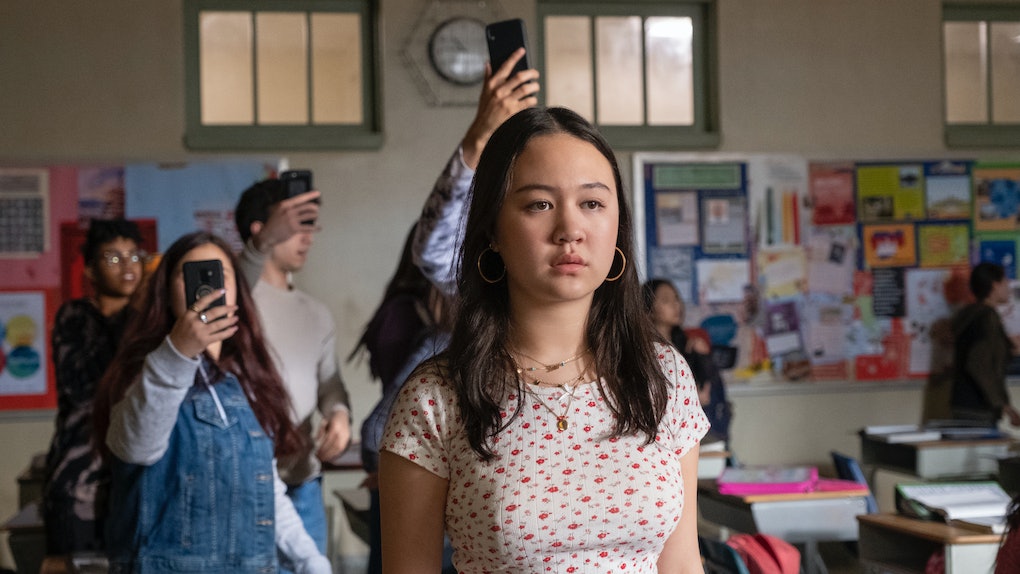 Growing up in 2020 is not simple, and Netflix's new teen series dives headfirst into all the messy complications that come along with being a teen in the turbulent social and political landscape of the moment. Grand Army will follow five young adults attending a large Brooklyn public school, and the first look at the series emphasizes just how intense and dramatic the series will be. Netflix's Grand Army trailer hits on so many hot-button issues in a frenetic minute-and-a-half clip.

The raw new show comes from playwright Katie Cappiello, who, in an interview with Entertainment Weekly, described the bold series as her life's work after spending nearly two decades listening to her theater students open up about their various struggles. The five leads at the center of the series are a diverse cast of up-and-coming stars, some of whom count Grand Army as their first official acting credit. While the specifics about the actual plot of the series is still being kept under wraps, the first trailer for Grand Army highlights the pressingly current issues the show will tackle in its first season, such as school shootings, peaceful protests against police brutality, teen pregnancy, and discovering one's sexuality.

The new series will be available to stream very soon. Grand Army will debut on Netflix on Oct. 16.

Grand Army's trailer makes an unforgettable first impression. It shows students yelling from the stands when a basketball team takes to their knees during the national anthem, followed by sirens going off in the school as all the students rush down the halls. There's also an arrest, and one of the students crying in a bathroom stall before later being shown in a hospital gown.

It's not all so somber, though. There are also some moments of joy, with a lot of laughing, dancing, and hooking up.

Amir Bageria will play Siddhartha, an Indian student-athlete coming to terms with his sexuality. Bageria is best known for starring in Degrassi: Next Class from 2016 to 2017. Maliq Johnson will play the aspiring musician Jayson. Last year, Johnson appeared in Netflix's critically acclaimed miniseries When They See Us. Rounding out the main cast, Odessa A'Zion will portray the outspoken it-girl Joey Del Marco. Prior to Grand Army, A'Zion recurred on Nashville and starred in the sitcom Fam.

Since the trailer is purposefully mysterious, the specifics of Grand Army's plot is still yet to be fully revealed. The show revolves around a large ensemble cast, so fans can expect the first season to juggle a ton of intersecting stories that hit on modern topics.

Grand Army will debut on Netflix on Oct. 16.