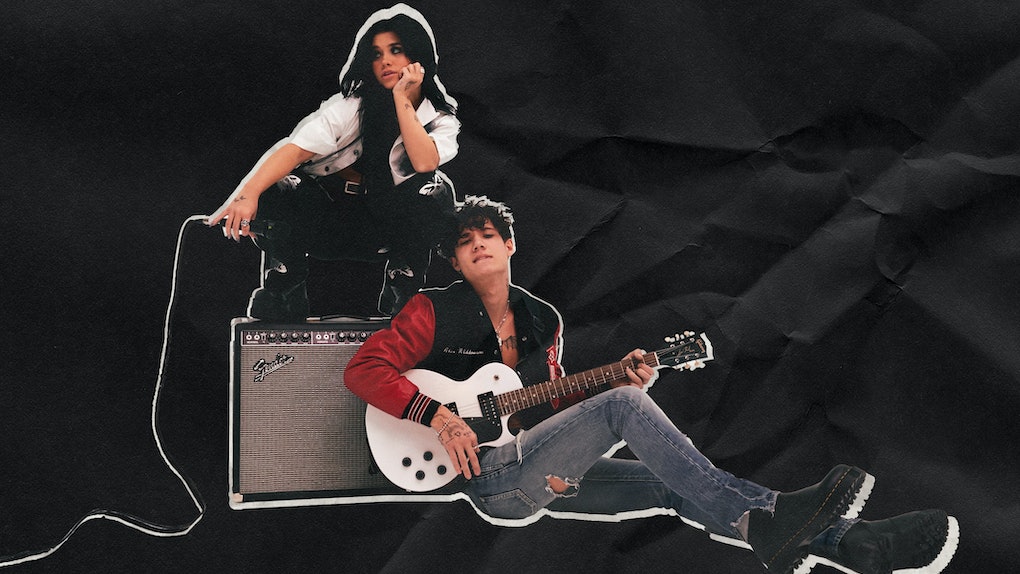 Nessa Barrett is ready to reintroduce herself to the world, and she’s enlisted the help of her fellow TikToker-turned-music star friend Jaden Hossler (who goes by jxdn) to do it. “When I first started social media, I 100% had a different kind of persona,” Barrett tells Elite Daily about her clean-cut, dare I say, “basic” 2019-era TikTok persona that attracted many of her early followers on the app (she now has nearly 15 million). “I think the main reason was I just wanted to fit in, and I wanted to be someone I knew people would like instead of being myself.” Nessa Barrett and Jaden Hossler’s single “La Di Die” is serving as her reset button, and she’s introducing the most authentic version of herself to the world, starting now.

It just made sense for Barrett to ask her longtime friend Hossler to hop on her new single when they crossed paths recording their respective solo music at the same studio in L.A. The song was co-produced and co-written by Blink-182’s Travis Barker, so it’s overflowing with early-2000s punk rock vibes. “It's the best feeling in the world,” Hossler says about working with Barrett and Barker. “Personally, getting to be working [him] every day and getting him to come and work on this project [with us] was really fun. Travis doesn't just work with anybody. He works with people that he sees a future in.”

“La Di Die,” which dropped on Feb. 19, explores Barrett and Hossler’s complicated relationships with fame at a point when they’re both making an official transition into pursuing their true passion: music. “I give my thanks and appreciation for what I've done in the past with my social media, but now we're on a different path,” Hossler says.

In the video for the track, Barrett appears dressed glamorously in a sparkly bandage dress, feather boa, and pearls as she sings these haunting lyrics morosely into the camera: “Will they love you when you're famous? / Where you'll never be alone / Hope someday I'll find nirvana / I'll be looking down below / I'll be dead at twenty-seven / Only nine more years to go.” Shortly after, she runs off set to her dressing room, removes her makeup (revealing her tattoos underneath), and changes into something more comfortable as she escapes for a joy ride with Hossler.

For Barrett, the video is more than just a grungy showpiece to shock her followers. It mirrors a real-life shift. “When I started music, I felt that was the time for me to actually be … the person that I am. So the music video was really all about my transition,” she says. “In the music industry, some labels and higher-ups just try to make artists be someone they're not … which I kind of experienced myself. I had to take full control creatively so I can stay myself.”

But even as Barrett makes this new bold statement to the world, she still worries people will use it as a tool to judge her new punk-rock style — a worry that’s been drilled into her subconscious by years of internet trolls commenting on her every move, no doubt. “I've always dreamt about becoming famous and being a singer, but … once I gained a following on TikTok and on social media, the more of the following I got, the more eyes were on me,” she says. “There's a lot of judgment and pressure that gets put on you that kind of destroys your mental health.” That’s why she feels the need to get ahead of the inevitable wave of haters that will call her a “poser” for rocking a new decidedly-black wardrobe, skater skirts, black talon nails, a growing tattoo collection, and did I mention way more black? “I want to stress the fact that who I am right now is actually the person that I am,” she insists. “It's not a front or a façade.”

As for Hossler, he hopes “La Di Die” can be a rallying cry that helps young people embrace vulnerability. “I'm at a point in my career where I'm OK with people knowing that I'm f*cked up in the moment,” he says. “I'm OK with people knowing I'm going through some things, because I know that I'm working toward the goal, which is peace of mind and feeling loved while giving love to others. The only way we can do it is by being vulnerable and being strong enough to walk through the dark places while still being a light. That's a hard thing to do, so music is my outlet.”

Barrett and Hossler have both seen the fruits of their labor in the reactions of their listeners. “The first comments that really showed me that people are f*cking with my music, not just me as a TikToker, is a lot of people will come and say, ‘Yo, I don’t really like him, but his music is banging.’ And that's exactly what I want," Hossler says.

“It's cool when people use your music to get past their own struggles, which is kind of insane, because me and Jaden both use our music to [do that],” Barrett adds. “There's this one part where Jaden screams, and I was seeing a lot of comments and videos where people are like, ‘It's so cool to just play this and then scream at the same time as Jaden and just let everything out.’” Hossler says that blood-curdling scream that rocks the listener to their core around 2 minutes and 30 seconds into the track was “super intentional.”

“Working with Travis, he tells me, this is what punk is,” Hossler explains. “Kids with broken homes flock to this type of music. [It's] talking about real things ... things kids and teens struggle with, and that's what we're trying to do ... I really want to connect with people and I know Nessa does to, and music literally seems like the only way we can, so we're running with it.”

“La Di Die” has racked up over 5 million views on YouTube in less than a week. So, if Barrett and Hossler are just running with it, they’re definitely getting somewhere.