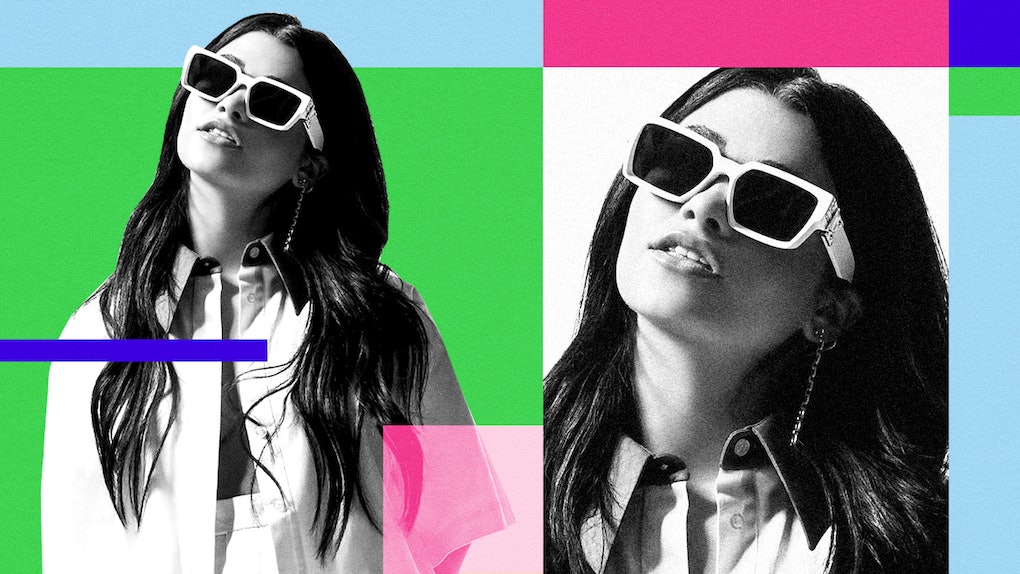 Nessa Barrett Explains Photos From Her Journey To Superstardom

To say the life story of TikTok star Nessa Barrett is unconventional would be an understatement. After making a TikTok account for fun with friends as a senior in high school, Barrett racked up nearly 10 million followers within her first year on the app. Before she knew it, she was moving away from her small New Jersey town and into a Los Angeles home alone — all before turning 18. While it may look like Barrett had a plan for superstardom, she wasn't prepared for how fast it all unfolded. "I never expected [my TikTok] to be anything," she tells Elite Daily. "It was all very natural."

For Barrett, social media fame became the perfect catalyst to pursue her recording career, a dream she's had since childhood. She's already dropped several emotion-packed songs, including "Pain" and "If U Love Me." Still, her journey as an artist has been a tumultuous one. She now has more than 4 million followers on Instagram and 12 million more on TikTok, and fame has come with its fair share of criticism. "Social media is really one-sided, and it's just showing a flat surface of my life, not everything," the singer admits. "Music is my outlet and my way of opening up more to my supporters and actually being my true self."

Below, Barrett reflects on some of her most memorable social media moments to date and shares the unique story behind each one.

ED: What was the story behind this shoot?

NB: Prior to this video shoot, I actually had another music video. I basically shot an entire video for "Pain" where I was all glammed up. It was very dramatic. I kind of left that video shoot super disappointed because I felt like the entire idea of the song was supposed to be so authentic and raw.

When the video was so dramatic, it wasn't intimate, and you couldn't really get the idea. Last-minute, me and my manager had to pull together a video idea in less than 24 hours and get it filmed. We found a rain room, and I thought that rain would be perfect because it symbolized the endless amount of tears that I cried during the time I was going through.

ED: What does your first single mean to you, considering how long you've dreamed of being a singer?

NB: ["Pain"] means so much to me. For one, I felt like there were so many significant things involved in the song. As my first single, it was so important because I had always wanted to be a singer, and, two, it reminds me of all the stuff I went through that I was able to overcome. I wrote it literally the day after I moved to LA by myself. When I look at it, it also shows growth because I've come such a far way as an artist since that song.

ED: You dropped "Pain" shortly after your split from Josh Richards. Did your relationship inspire the track at all?

NB: I'd honestly be lying if I said the breakup had nothing to do with "Pain." It was a mixture of everything. The breakup was just the icing on the cake. I was going through a lot of hate on social media at the time. I moved at the age of 17 away from my family across the country and was living alone. I was dealing with a lot of mental health struggles and, overall, was literally just in pain. There was nothing else to describe it.

ED: What's the meaning behind your "pure" tattoo?

NB: I always wanted a tattoo there. Most of my tattoos have something to do with music. I remember growing up, whenever I would sing, my voice would be described as pure, or different, or unique. That mostly had to do with music. I also just thought it would be cool. It's a nice word.

ED: Were you scared getting it?

NB: This actually was my fourth tattoo. I was a little nervous because it was on my neck and my first one on that area, but it wasn't that bad!

ED: How many tattoos do you have in total?

ED: Do you want more tattoos?

NB: Oh yeah, I have a whole Pinterest folder of tattoos.

ED: If you were to get another tattoo tomorrow, what would it be?

NB: I'm planning on doing an entire sleeve one day, but probably the next one would be... I have a tattoo idea of getting the word anxiety, and then over it would be a spider. I kind of want my sleeve tattoo to be based on all my struggles and the ones around it to explain how I overcame them.

ED: What's the story behind this moment?

NB: This picture was on Christmas, and I'm wearing this dress that I actually stole from school. The teacher had to give it to me because it was in the dress-up treasure chest box, and I would beat all the kids to the treasure chest just so I could put on that dress. The teacher ended up just giving it to me, and it ended up that I'd wear it every day 24/7 and wouldn't take it off. I wouldn't even let my parents wash it.

ED: What do your parents think about your social media fame?

NB: My mom is insanely supportive and kind of amazed. It was only last year she would have never thought I'd be able to move out and live on my own, especially across the country without any help. She's just amazed. I flew her out here twice now, and she's come and watched my music video shoots and seen me in the studio. She's just so happy that I've been able to follow my dreams. Every time I call her she's like, "I was just playing you on my Alexa!"

ED: Do you remember what was on your nose in the photo?

ED: How do you stay grounded and true to your roots?

NB: I've never been a cocky person. I really do appreciate everything that's been given to me. I think, a lot of times, my mental health struggles have taught me to be a lot more grounded and humble as a person. I feel like any struggle anyone deals with makes them more humble. I know my life isn't perfect, but I know I've achieved a lot at a young age, and I'm so grateful for it. It's something I knew I always wanted to do, so it's not so crazy to me. Now that I'm here, I just can't wait to keep working and keep moving forward.

In Elite Daily’s I Can Explain… series, we’re asking celebrities to revisit their most memorable photos and tell us what really went down behind the scenes. Read more here.

More like this
Lizzo's Birth Chart Explains Her Confidence & Why She's Made For The Spotlight
By Chelsea Jackson
BTS' "Butter" Concept Photos Have ARMYS Searching For Clues
By Michele Mendez and Cianna Garrison
TXT's 'The Chaos Chapter: FREEZE': Release Date, Tracklist, Music Videos & More Details
By Michele Mendez
Stay up to date