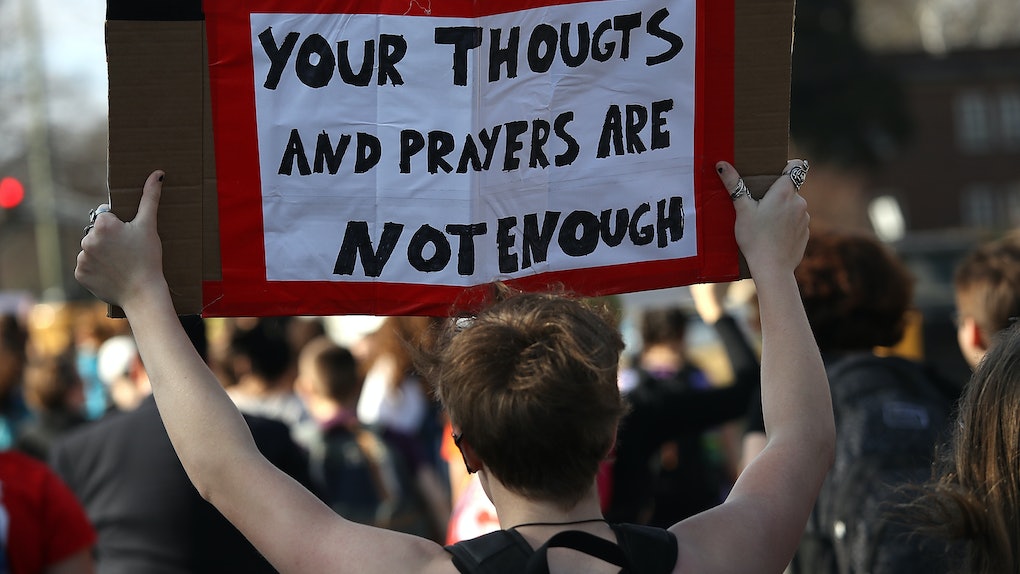 On Wednesday, March 14, students across the country stood up to protest against gun violence and the toll it has taken on schools. The National Student Walkout was a way to demand gun control from politicians, and the students made sure that their demand was made loud and clear through the posters for the National Student Walkout. This demonstration was prompted after the Feb. 14 shooting at Marjory Stoneman Douglas High School in Parkland, Florida, where 17 students and educators were killed.

Following the shooting, many of the students from Parkland immediately began speaking out to demand gun reform laws. The Marjory Stoneman Douglas students have spoken out both to the media and to politicians through demonstrations, rallies, and talks with various political leaders. The actions of these students has prompted loud actions from other students across the country, from kindergartners to college undergraduates and grad school students.

The Enough! Walkout was organized by EMPOWER, the youth branch of the Women's March, the same group that has been planning demonstrations since the 2016 presidential election. EMPOWER includes young students and worked with other students to ensure that the protest was a youth-driven activation, and students across the country proudly met the call with the walkout on Wednesday. The walkout began at 10 a.m. and continued across the country at 10 a.m. in each time zone. Each walkout lasted 17 minutes to honor the 17 lives lost in Parkland, Florida.

The message that the students are sharing at the walkout is stark and straightforward: Students do not want to go to school with the threat of being violently killed by a gun. They spoke out against politicians who won't enact stricter policies, against the NRA and its lobbying power, and in honor of the many young victims of school shootings.

These are some of the students' posters.

Some students paid tribute to the Parkland school shooting victims.

In addition to highlighting the victims' names, many students held die-ins and moments of silence in the memory of the Parkland victims and other people who have been killed in school shootings.

Along the walkout, there was a #WalkUpNotOut movement.

Walk Up Not Out is a movement all about reaching out to other students at school, including those who look like they may not have many friends around.

Ryan Petty, the father of 14-year-old Alaina, who was killed in the Marjory Stoneman shooting, supported the walk up movement. "If you really want to stop the next school shooter #walkupnotout," he tweeted.

The color orange made an impact at the walkout.

That is because the color orange has been used to represent gun reform since at least 2013, per CNN. This decision dates back to the 2013 death of Hadiya Pendleton, who was shot in Chicago a week after performing for Barack Obama's second inauguration. Cleopatra Cowley-Pendleton and Nathaniel Pendleton, Hadiya's parents, picked the color orange to represent the movement as they created the organization We Are Orange.

"Orange is what hunters wear in the woods to protect themselves and others from harm. Orange is a bright, bold color that demands to be seen. Orange expresses our collective hope as a nation — a hope for a future free from gun violence," We Are Orange explains on their website.

Students took the time to make the posters themselves.

As seen on social media, many schools, educators, and student clubs hosted events for people to come together to make their posters in preparation for the national student walkout.

The anti-gun message came in loud and clear through the posters.

While many of the students demonstrating on Wednesday are not yet old enough to vote, they have found another marvelous way to get politicians to listen to their voices. With 14 school shootings so far in 2018, by CNN's count, they have an obvious issue to push back on. For these students, it's simpler than partisan politics. This is about saving their lives and ensuring their safety. Everyone should have the right to get an education without feeling unsafe. It's not complicated. Now, it's up to politicians to respond to this demand.