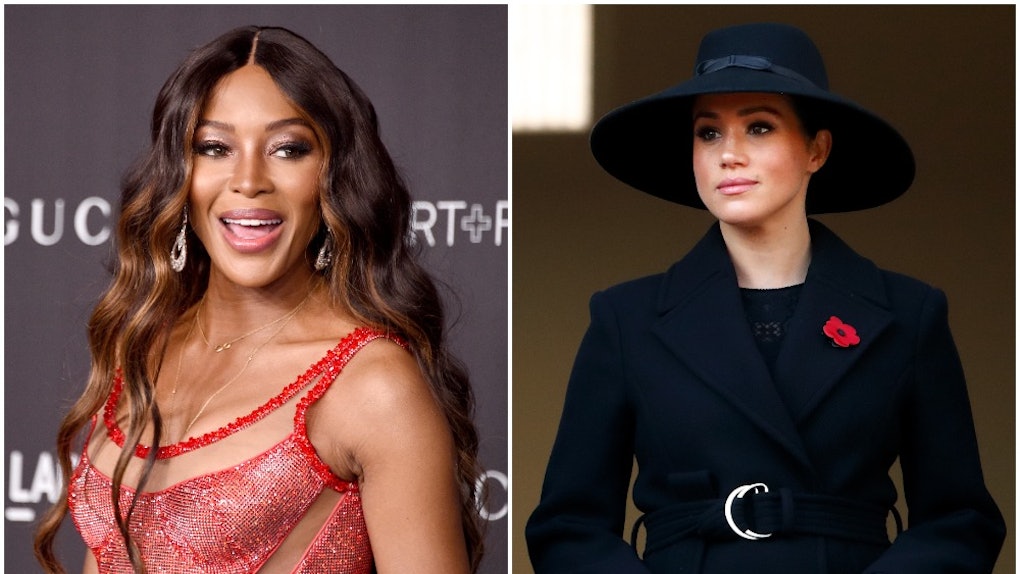 I never thought I'd have much in common with a supermodel like Naomi Campbell, but, apparently, there's one thing we're definitely on the same page about: our love for Meghan Markle. The supermodel just spoke out about the unfair treatment Meghan has received in the British tabloids, and, as a fellow stan of the Duchess of Sussex, I commend her. Naomi Campbell's quote defending Meghan Markle was so sweet and supportive.

Meghan hasn't had an easy time following the birth of her son, Archie, in May. She's currently in the midst of a legal battle with The Mail on Sunday over its coverage of her and Prince Harry's personal affairs. Knowing this, Campbell applauded Meghan for taking a stand.

"When I heard [she was taking legal action], I was like ‘Bravo. Good for her,'" Campbell said in an interview with The Guardian.

As one of the biggest supermodels in the world, Campbell is no stranger to the harsh press and invasion of privacy celebrities fall victim to regularly. And, as a woman of color, Campbell notes that the press often treats her, and other celebrities of color, even worse.

"We all know what that’s about," Campbell said. "I’ve seen how they treat Raheem Sterling, how they speak about Lewis Hamilton and Serena Williams. I don’t know how Meghan Markle deals with this and I’m really glad she’s taken action to defend herself."

Campbell clearly has Meghan's back, and she's not the only one. Prince Harry filed a legal complaint against the tabloid and released a statement condemning tabloid culture in October 2019.

"My deepest fear is history repeating itself. I’ve seen what happens when someone I love is commoditized to the point that they are no longer treated or seen as a real person. I lost my mother and now I watch my wife falling victim to the same powerful forces," he said. Elite Daily previously reached out to The Daily Mail for comment.

Through all of this, you have to give Meghan credit for keeping it real. She revealed the toll the harsh press has taken on her in the documentary, Harry & Meghan: An African Journey.

"Any woman, especially when they’re pregnant — you’re really vulnerable. So that was made really challenging. And then when you have a newborn, you know? Thank you for asking because not many people have asked if I’m OK," she emotionally said. "It’s a very real thing to be going through behind the scenes."

While Meghan is one tough cookie and handles all of this with grace, it's great to see she has a support system behind her. Clearly, Campbell knows that at the end of the day, queens support queens.