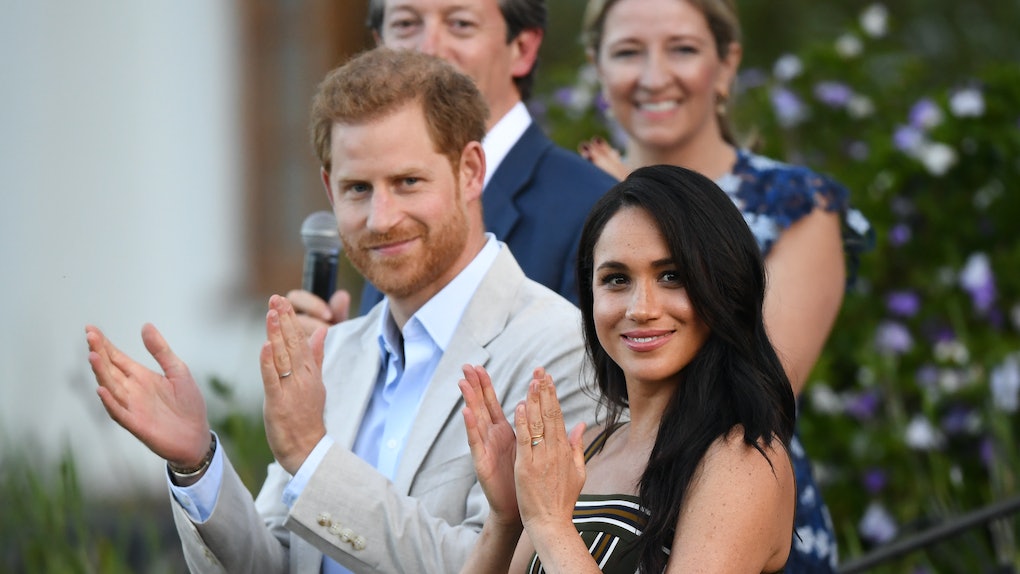 Prince Harry is not going to sit silently when he thinks his wife is being treated unfairly. It's no secret Meghan Markle, Duchess of Sussex, has been the target of many less-than-flattering tabloid reports over the past year. Now, the Duke and Duchess of Sussex are fighting back. They have filed a legal complaint against The Mail on Sunday for what Prince Harry calls "false" and "deliberately derogative" coverage of her. You need to see his statement, because Prince Harry's quote about Meghan Markle and Princess Diana within it is incredibly powerful and shows just how much Meghan means to him.

In a statement released Tuesday, Oct. 1, Prince Harry spoke of the harsh criticism his wife has received from UK-based media. "My wife has become one of the latest victims of a British tabloid press that wages campaigns against individuals with no thought to the consequences – a ruthless campaign that has escalated over the past year, throughout her pregnancy and while raising our newborn son."

He went on to condemn what he called the "relentless propaganda" from the tabloid media and then pointed out that it's what cost him his mother Princess Diana's life.

"My deepest fear is history repeating itself," he continued in the statement. "I’ve seen what happens when someone I love is commoditized to the point that they are no longer treated or seen as a real person. I lost my mother and now I watch my wife falling victim to the same powerful forces." Prince Harry was only 12 years old when his mother died after her limo crashed while fleeing paparazzi on Aug. 31, 1997. He has every right to protect the people he holds close.

The Duke of Sussex also said this course of legal action is in regards to one specific incident they feel is part of a "long and disturbing pattern of behaviour by British tabloid media."

In their suit, the Duke and Duchess of Sussex allege the The Mail on Sunday published a private letter from Markle to her father in February 2019. Prince Harry claims it was published "unlawfully in an intentionally destructive manner to manipulate you, the reader, and further the divisive agenda of the media group in question." The Mail on Sunday responded to Prince Harry's claims. In a statement provided to BuzzFeed News, the paper said it "will be defending this case vigorously. Specifically, we categorically deny that the Duchess’s letter was edited in any way that changed its meaning." Elite Daily reached out to DMG Media for further comment on Prince Harry's complaint, but did not hear back by the time of publication.

He went on to add, "In addition to their unlawful publication of this private document, they purposely misled you by strategically omitting select paragraphs, specific sentences, and even singular words to mask the lies they had perpetuated for over a year."

He added, "Up to now, we have been unable to correct the continual misrepresentations — something that these select media outlets have been aware of and have therefore exploited on a daily and sometimes hourly basis."

"It is for this reason we are taking legal action, a process that has been many months in the making," he continued. "The positive coverage of the past week from these same publications exposes the double standards of this specific press pack that has vilified her almost daily for the past nine months; they have been able to create lie after lie at her expense simply because she has not been visible while on maternity leave. She is the same woman she was a year ago on our wedding day, just as she is the same woman you’ve seen on this Africa tour."

It's honorable that Prince Harry is defending his wife and sticking it to those who paint an unfair picture of her. For anyone wondering, Prince Harry and Meghan Markle's case is being privately funded by the couple. Depending on the court ruling, proceeds from any damages will be donated to an anti-bullying charity.