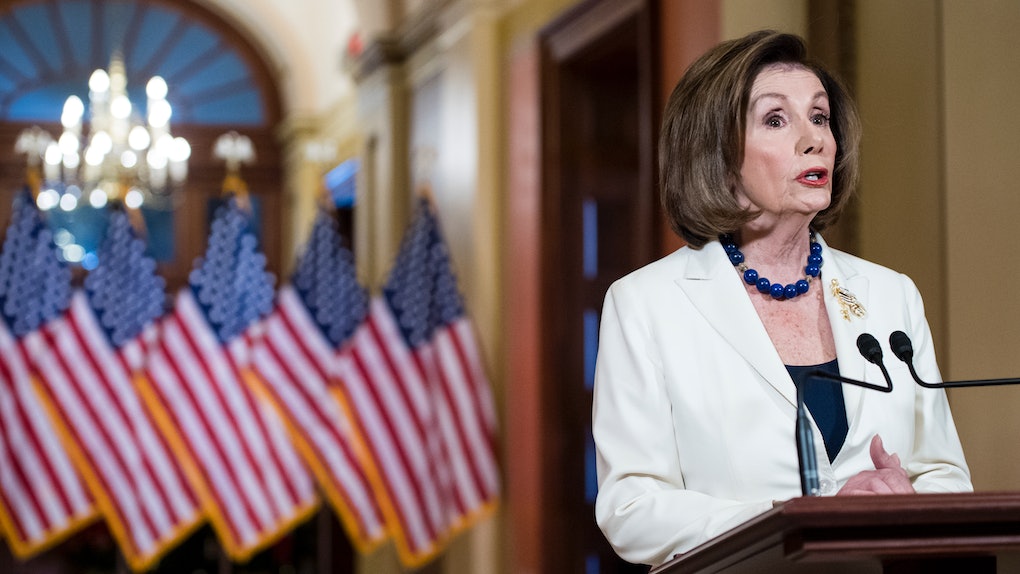 For weeks, the impeachment inquiry into President Donald Trump has been ramping up, with testimony from senior diplomats, national intelligence officials, and more. Despite this, it seemed for a time that Democrats were going to hold off on actually pursuing an official impeachment vote — until now. On Thursday, Dec. 5, House Speaker Nancy Pelosi announced the House of Representatives would begin drawing up articles of impeachment against Trump, setting the stage for a potential impeachment vote before Christmas.

Pelosi's announcement was brief — approximately six minutes — but to the point. She drew upon the words of the United States Constitution and the country's founders to point out that impeachment is "a constitutional remedy to protect against a dangerous or corrupt leader," and went on to claim Trump was such a leader.

In a statement, White House Press Secretary Stephanie Grisham said Pelosi and the Democrats "should be ashamed." In a tweet after the announcement, Grisham wrote, "[Trump] has done nothing but lead our country — resulting in a booming economy, more jobs & a stronger military, to name just a few of his major accomplishments. We look forward to a fair trial in the Senate."

"The facts are uncontested," Pelosi argued. "The president abused his power for his own personal political benefit at the expense of our national security, by withholding military aid and crucial Oval Office meeting in exchange for an announcement of an investigation into his political rival."

Pelosi was referring to allegations Trump had threatened to withhold military aid from Ukraine unless the country launched an investigation into Hunter Biden, the son of former Vice President and 2020 Democratic presidential candidate Joe Biden. The U.S. government did in fact delay planned aid to Ukraine following a July 25, 2019, phone call in which Trump asked Ukrainian president Volodymyr Zelensky to investigate the Bidens, but Trump has denied the two were connected. State department officials who testified to Congress in October and November asserted they believed the request and the pause on the aid were intended to constitute a quid pro quo. Pelosi went on to suggest "our democracy is what is at stake."

"The president leaves us no choice but to act because he is trying to corrupt, once again, the election for his own benefit," Pelosi said. She then proceeded to call on the House committees investigating Trump's potential impeachable offenses to proceed with articles of impeachment against the president.

According to Newsweek, some Republicans have argued Democrats are moving too quickly with impeachment proceedings. However, former Watergate prosecutor Jill Wine-Banks — who notably cross-examined former President Richard Nixon's secretary — argued on Twitter "there is always more evidence to get, but a good prosecutor knows when enough is sufficient."

"No one who cares about democracy or the 2020 election thinks impeachment is moving too fast," Wine-Banks wrote.

At the same time, Trump and other Republicans have also suggested the impeachment process should move faster so they can get to a "fair" trial in the GOP-led Senate. In set of tweets on Dec. 5, Trump said that if Democrats are "going to impeach [him], do it now, fast, so we can have a fair trial in the Senate, and so that our Country can get back to business."

Pelosi's announcement on Thursday was a critical moment in Trump's presidency. Before Pelosi officially announced the impeachment inquiry in September, some Democrats were not ready to impeach the president, while others urged her to push forward with impeachment. But now, according to CNN, it seems Democrats are in agreement that the time has come to impeach Trump.