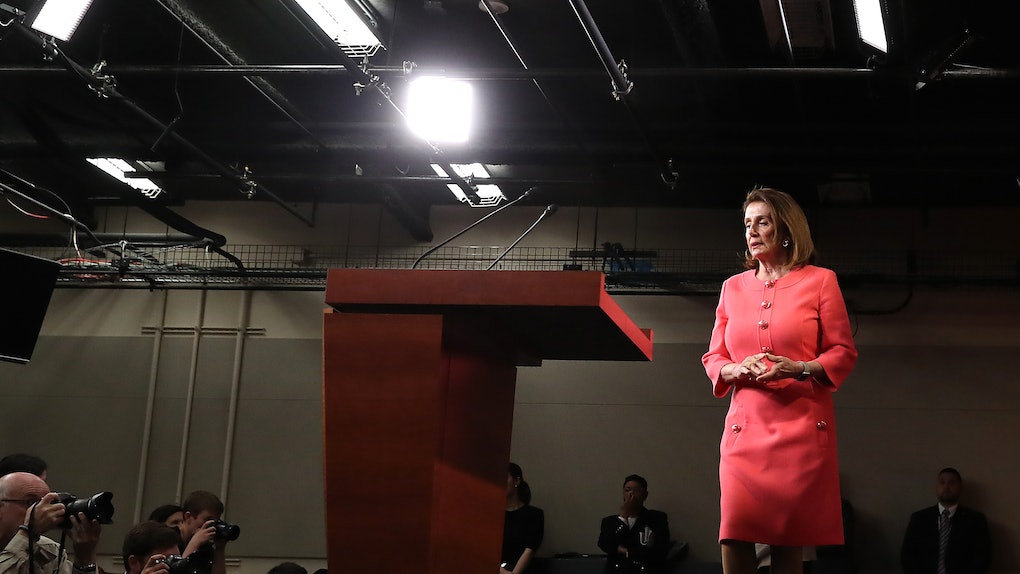 At this point, we're all aware that House Speaker Nancy Pelosi doesn't hold back. Tensions between her and President Donald Trump have increased over the past few months, but the fact that Nancy Pelosi called Donald Trump "self-impeachable" might be the icing on the cake. Grab your popcorn, folks.

On Wednesday, May 8, Pelosi spoke to The Washington Post during a live interview in regards to Attorney General William Barr's testimony in front of the Senate Judiciary Committee on May 1, as well as the possibility of President Donald Trump being impeached. Well, Pelosi didn't necessarily make any concrete claims that will happen, but she did have some strong words to how Trump is handling the situation.

"He’s becoming self-impeachable in terms of some of the things he’s doing," Pelosi told The Washington Post, mentioning his refusal to comply with subpoenas. She did not elaborate on what she meant by "self-impeachable," and did not directly answer a following question on whether she would consider a "narrow" impeachment option for the president. Elite Daily reached out to Pelosi's office for further comment on the statement, but did not hear back in time for publication. As of publication, there have been no serious moves to impeach Trump.

Despite the fact that Pelosi and Trump haven't seen eye-to-eye on many issues, the House speaker has pushed back against other Democrats' calls to start the impeachment process of the president. This has been a dividing line between her and many other House Democrats, with Pelosi claiming that there's other ways to hold the president accountable for alleged obstruction and collusion without resorting to impeachment.

However, judging by Pelosi's recent remarks, she might be reconsidering that stance, since apparently she thinks Trump is doing the work for her and fellow Democrats.

Trump apparently has a completely opposite stance on Pelosi's opinion. Following the whirlwind of Special Counsel Robert Mueller's redacted report being publicly released on April 18, the president has vehemently denied claims that any collusion or obstruction of justice took place from him and his 2016 presidential campaign. In fact, on April 22, Trump took to Twitter to shut down claims that he could be impeached due to the Mueller report. However, he missed one big element. Trump wrote,

Only high crimes and misdemeanors can lead to impeachment. There were no crimes by me (No Collusion, No Obstruction), so you can’t impeach. It was the Democrats that committed the crimes, not your Republican President! Tables are finally turning on the Witch Hunt!

Trump is correct that Mueller's report didn't conclude that he or his presidential campaign had colluded with Russian operatives in the 2016 election, although it expressly did not exonerate the president on obstruction of justice. However, Trump's claim that "only high crimes and misdemeanors can lead to impeachment" misses the mark for a big reason. The thing is, presidents can be impeached if their actions are conceived as harmful or threatening to society, which doesn't need to involve criminal activity, according Barbara Radnofsky, the author of A Citizen's Guide To Impeachment.

"Impeachment doesn't require criminal conduct, so even without Mueller's definitive conclusion on criminal behavior, there's no question that this is impeachable," Radnofsky previously told Elite Daily in an interview.

So yes, Mueller's report didn't find any evidence that Trump and his campaign committed a crime, but according to Radnofsky, impeachment could still be possible for Trump regardless.

At the moment, there's no telling whether Democrats will go through with trying to impeach Trump. However, if Trump continues his behavior, Pelosi apparently has a feeling what could unfold.

More like this
These Tweets & Memes About Matt Gaetz's Venmo All Make The Same Joke
By Cianna Garrison
The More Contagious B-117 COVID Variant Is Now The Most Common Strain In The U.S.
By Rhyma Castillo
Angry Orchard's Peach Mango & Strawberry Hard Cider Flavors Are Twists On A Classic
By Daffany Chan
Stay up to date