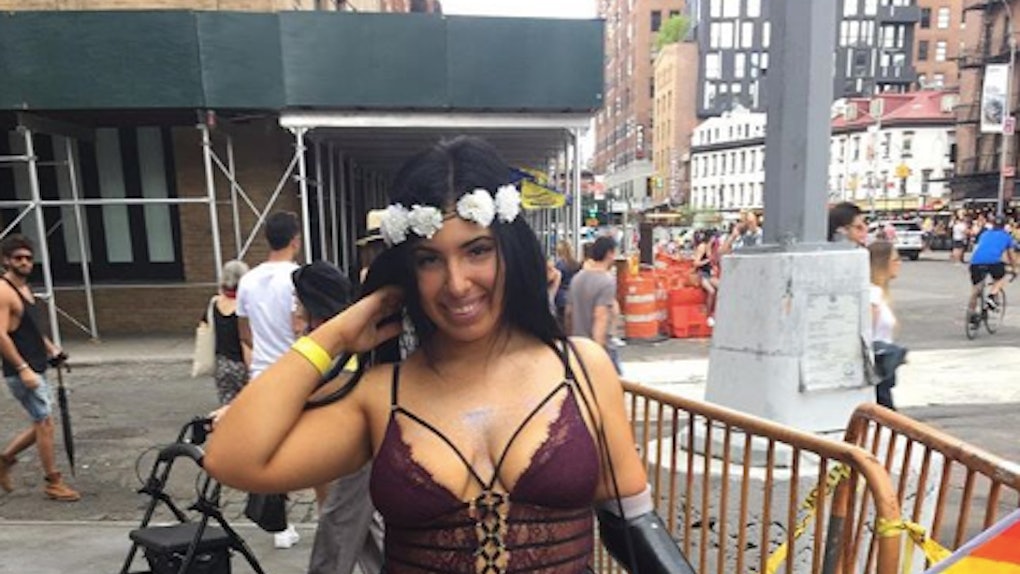 Pride: the season of glitter and gays, shots and shamelessness, boobs and booze, excitement and ex-girlfriends. Pride is monumental for a lot of reasons (and problematic, depending on who you ask) but no matter how you feel about it, if you’re a fellow homosexual, chances are you’ll never forget your first Pride Parade.

I wasn’t out to my family yet. But you know how you have those people in your family that just know who you truly are? My cousin knew that I always wanted her hand-me-down Angel jeans, and she also knew that I was a total dyke. I always considered her untouchably cooler than me, even though we were very close. She wore a seatbelt as a belt, and by Long Island standards, that basically made you coolness factor royalty. Anyway, she was about to change my life by asking me a simple question.

“The Pride Parade is tomorrow. Want to go?” She asked casually, as if she was asking me to pass her a piece of my chocolate graduation cake, as opposed to asking me the most important question of my young adult life.

I could’ve sworn my heart stopped. My eyes darted around our table to make sure no one in the family heard. No one batted an eye, save for my best friend Kelley who enthusiastically bobbed her head up and down and gripped my forearm with her long acrylic nails.

That night Kelley and I frantically raided Party City for every rainbow accessory available. The next day, I nervously locked my door and I dressed in rainbow from head to toe. Then, I covered it all up with a big t-shirt dress and stashed a set of rainbow eyelashes in my purse.

“We’ll text you when we get to Six Flags!” I yelled to my mom on my way out the door. I was sure she could see my rainbow outfit with X-ray vision, just like she could always tell if my leggings were see-through before I even turned around. She kissed my cheek and waved to my cousin from the front stoop. By the time I got into my cousin’s Mercedes, I felt like I had successfully robbed a bank. I couldn’t believe it. I was on the way to a place where I could be out.

When we arrived at the parade, I was shook: the city was covered in rainbows and the streets were crowded with gays from every walk of life.

"Come here," one of the marchers said to me, even though she was on the other side of the barricade. "We're marching with the Anti-Violence Project."

Even though pedestrians aren't supposed to cross the barricade and march in the parade, I took her hand and joined her. I was terrified I'd get thrown out. But within five minutes, my cousin and I were marching in the Pride Parade, screaming, "Happy Pride!!!" to anyone and everyone.

The energy in the air was spellbinding. The other Anti-Violence Project marchers gave me and my cousin t-shirts, and an older woman with sleeve tattoos on both of her muscular arms handed me a bunch of stickers.

"Hand these out to the crowd," she said, smiling. "B*tches love stickers."

Then we saw my friends from my high school’s Gay/Straight Alliance in the crowd. They cheered me on like I was running a marathon. The next thing I knew, they were hopping the barricade and sprinting toward me and my cousin. We erupted in screams, squeals, hugs and disbelief. And somehow, just like that, we were all marching together.

At the end of the march, my cousin left me in the festival area. “You go ahead,” she said, smiling and squeezing my hand before she left to go wait for me in a Starbucks. I was left with my queer squad from school, and we were high on serotonin and sweat. I bought a hat that said "Just Be A Queen," a shirt that said, "Everyone is Gay," a fan, a meat stick, and a virgin piña colada. I was dead sober and it was the best day of my life.

I had never been surrounded by so many gay people. It was magical. I had never felt so seen, so validated, and so genuinely, deliriously happy. I will forever be grateful to the act of kindness my cousin showed me by taking me to the Pride Parade.

When I met her back at the parking garage, I hugged her as tight as I could. I couldn't thank her enough. We listened to Alanis Morissette the whole ride home with all the windows down.

As we turned onto my block, I slipped the plain t-shirt dress back over my clothes, and used a baby wipe to remove the glitter from my entire body. I walked in my house, exhausted and elated, and felt anxious that my mom would somehow know we were at the parade.

“How was Six Flags?" my mom asked.

“It was good!” My cousin launched into a whole soliloquy about each ride we went on, complete with a dramatic tale of her puking. I've never been so grateful for a person in my entire life.

Upstairs in my room, I peeled off the t-shirt dress and sat down in my rainbow outfit. I was sunburnt and high on life. As I undressed and glitter fell to the floor, so did my tears of joy.