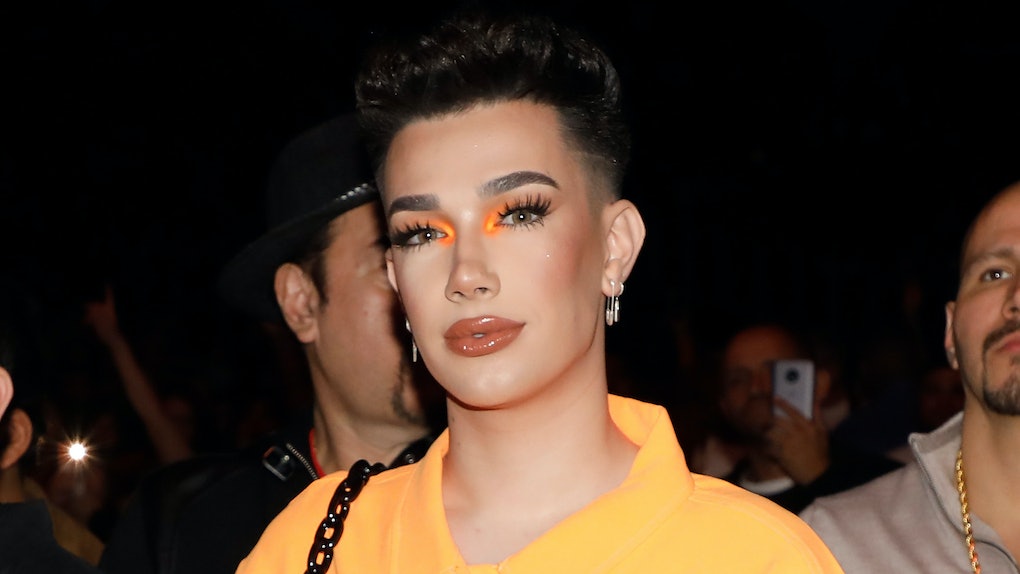 In separate statements released on Friday, April 16, 2021, both Morphe and James Charles announced the end of their partnership. This move comes after numerous Morphe fans called for action on the brand's part when allegations of James Charles texting underaged fans came to light in February 2021, a situation Charles acknowledged in an April 1 YouTube video titled "holding myself accountable." Both Morphe and Charles took to Twitter with the news of their business relationship ending.

"In light of the recent allegations against James Charles, Morphe and James have agreed to end our business relationship and wind down sales of the Morphe x James Charles product offering," the brand wrote. "It is and has always been Morphe's goal to create a positive, safe, and empowering space where all beauty lovers can freely share their artistry and passion for cosmetics, and Morphe is committed to furthering that goal."

Charles echoed the sentiment in a slightly lengthier post, adding that his legal team has had to address "a series of misleading stories and false allegations" since the original allegations became public. "These stories have caused many of my long-term partners to receive considerable negative feedback, one of them being Morphe. I've loved every moment working together, and am beyond grateful for what we've created together," Charles wrote. "That being said, I reached out to them and we mutually agreed to wind down our James Charles x Morphe collaboration, which is my only project with them. I am continuing to take time away to learn, grow, and listen, and look forward to coming back one day in the future as a better version of myself."

In his April 1 video, Charles addressed the underage texting allegations, first apologizing to those he hurt or made uncomfortable, as well as to his friends and fans "that have to watch another one of these videos," calling that fact "really, really embarrassing." Charles also briefly alluded to similar allegations he faced two years earlier, which he addressed in a video titled "No More Lies," filled with receipts and rebuttals in response. The tone of this new video is much different, and Charles admitted he understands how "wrong" and inexcusable his actions are.

"In case anybody isn't aware of what's going on, within the past couple of weeks, two different people, both under the age of 18, have recently come forward saying they had inappropriate messages with me on social media — one of them being from last year and one of them being from more recent," Charles said. "In both of these cases, I added these people on Snapchat, asked how old they were right away, was told that they were 18, believed them, engaged in a flirty conversation, and later on, found out they were actually 16. Upon finding out, I was immediately embarrassed and blocked both people."

Charles then stated he "f*cked up" and "takes accountability" for his actions. "These conversations should have never happened, point, blank, period. There's no excuse for it— no ifs, ands, or buts, and I take full responsibility for that," he said. "I trusted the information that was given to me rather than the information that I could have and should have gotten myself. In both of these situations, doing research into these people's public social media profiles would've revealed their true ages and therefore these conversations would've never happened in the first place."

Before reflecting on the potential reasons or decisions that led to his actions, Charles offered another apology to the people he texted. "To the guys involved in this situation, I want to say I'm sorry," he said. "I'm sorry that I added you. I'm sorry that I flirted with you. And I'm really sorry if I ever made you uncomfortable. It's unacceptable."

More like this
These Stick-On Face Jewels, Gems, & Nail Art Are Coming For Your Selfies
By Margaret Blatz
The Morphe x Coca-Cola 1971 Unity Collection Leads With Peace & Love — EXCLUSIVE
By Theresa Massony
The Derol Lip Plumper On Amazon Is Taking Off On TikTok, But Is It Safe?
By Margaret Blatz
Stay up to date