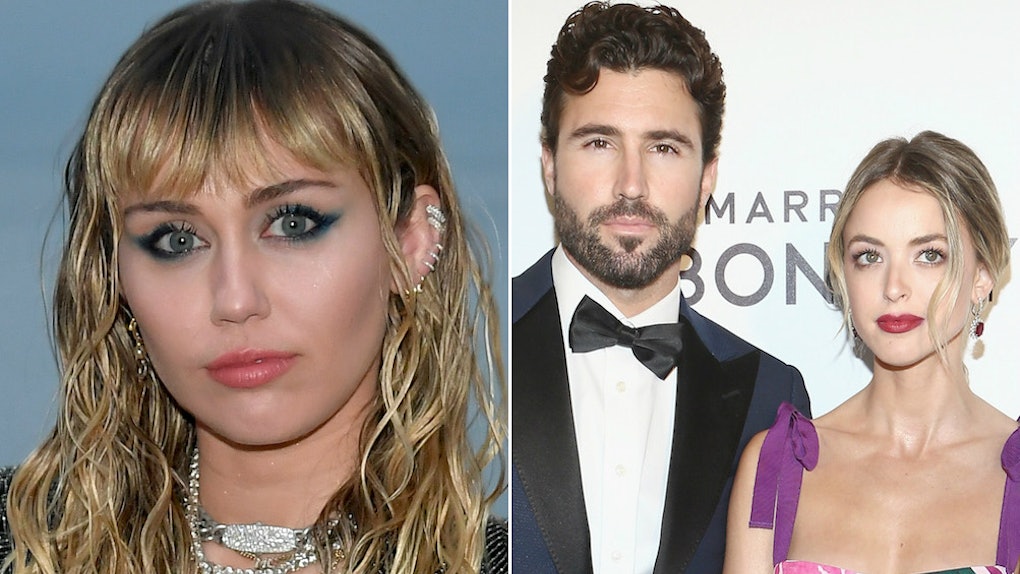 Miley and Liam are done. Caput. Called it quits. No more. The couple, who just got married in December 2018, announced their split over the weekend, and Cyrus spent the weekend with Kaitlynn Carter, Brody Jenner's soon-to-be ex-wife. The two women were reportedly seen making out while partying together in Italy, and Jenner seemingly was not a fan. Miley Cyrus's response to Brody Jenner joking about her and Kaitlynn Carter kissing shut down his comment real fast, though.

A representative for Cyrus and Hemsworth announced their split on Aug. 11.

"Liam and Miley have agreed to separate at this time," the statement said. "Ever-evolving, changing as partners and individuals, they have decided this is what’s best while they both focus on themselves and careers. They still remain dedicated parents to all of their animals they share while lovingly taking this time apart. Please respect their process and privacy."

It was hella hard for lots of people on the internet to believe. They just got married in December! I thought things were going so well!! But the breakup is real, as is Brody Jenner and Kaitlynn Carter's, whose split was announced on Aug. 2. The two had been married for a year and together for about six years, but apparently never legally got married in the U.S. (Their wedding was in Indonesia in June 2018.)

"Brody Jenner and Kaitlynn Carter have decided to amicably separate," a representative for the pair told Us Weekly. "They love and respect one another, and know that this is the best decision for their relationship moving forward."

Now that we've covered all of those breakup bases, here's the tea on Cyrus and Carter. The two were seen partying in Lake Como together following the announcement of Cyrus and Hemsworth's split. They both posted on Instagram about it, but what they didn't post was the paparazzi photos of them seemingly kissing during this little vaca!

Brody Jenner decided to joke about it, and the ever-reliable @CommentsByCelebs Instagram account documented what went down with Jenner and Cyrus next.

Jenner posted a photo of him standing by a beach and said, "Don’t let yesterday take up too much of today."

Brandon Thomas Lee, who's on The Hills: New Beginnings with Jenner and Carter and is Pamela Anderson and Tommy Lee's son, commented on the post saying, "Let's round this scandal out and post a pic of us making out."

"Watch out! Pics of Liam and I holding hands on the beach coming soon," Jenner responded. Yikes. Then, Cyrus came in.

"Go take a nap in your truck and cool off #HotGirlSummer," she shot back at Jenner's comment.

Wowowowowow. I am shook by everything that has gone down between these two former couples this weekend. One minute, I'm sitting here thinking Miley and Liam are living, loving, and thriving in their life together, next thing I know, Cyrus is out here making Jenner run for his life! Like Cyrus said in one of her (many) Instagrams post-breakup as well as in the undying cinematic classic that is The Hannah Montana Movie, life's a climb, but the view is great. *Tips cowboy hat*.