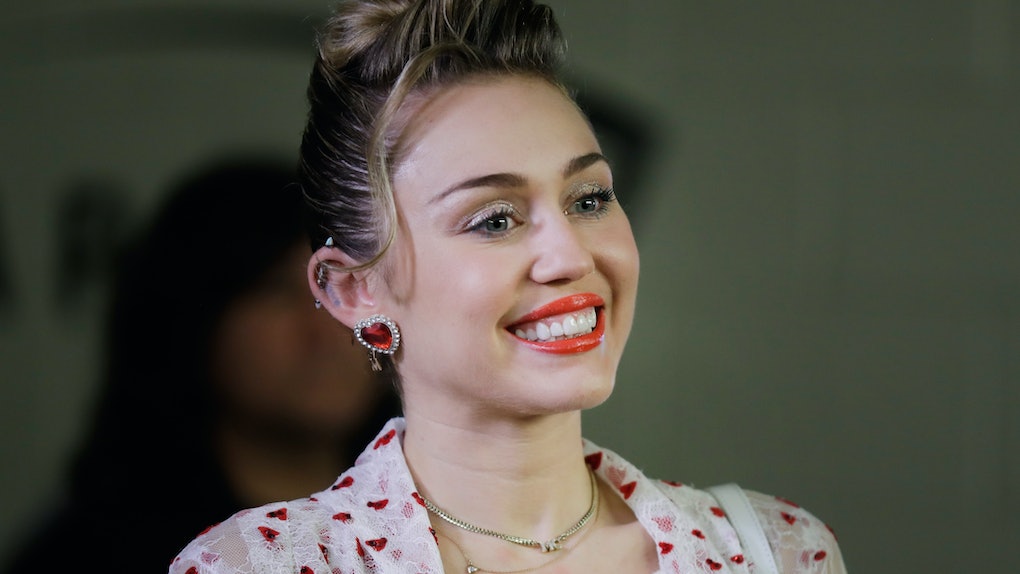 Miley Cyrus' Message To Las Vegas Shooting Victim Is So, So Touching

The country has been left stunned and reeling in the aftermath of the horrific Las Vegas shooting that occurred earlier this month on the night of Oct. 1. Celebrities and civilians alike have banned together in the call for gun reform, and to rally around the survivors and families of those victims of the tragic event. One such celebrity is Miley Cyrus, who has been vocal and active in her response. One thing she's done is reach out to those personally affected, and now a video of Miley Cyrus' message to a Las Vegas shooting victim is circulating the internet, showing just how important it is to not let up on extending love and support at this time.

On the night of Oct. 1, country music fans came together for the Route 91 Harvest Festival near the Mandalay Bay Resort and Casino in Las Vegas. From a hotel room in the resort, a single gunman opened fire onto the crowd of nearly 22,000 people, reportedly killing 59 individuals and injuring over 500 more. Among those injured was Katrina Hannah, who was shot twice — once in the neck and once in the shoulder.

In the video, Hannah is seen laying down in a hospital bed wearing a neck brace. According to ABC 7, a friend delivered Cyrus' video message to Hannah on Tuesday, Oct 17.

In her message, Miley shouts out her love and support for Hannah, explaining she heard about her through "many wonderful people."

Hi Katrina, this is Miley. I’ve heard about you from so many wonderful people. Your name got to me from so many friends, some contestants on The Voice. They said that you’re a huge fan, and I just wanted you to know that I’m thinking about you all the time. Sending all good, healing, and peaceful vibes to you, all your family and your friends. I hope you’ll feel better soon and just want you to know that you’ll be on my mind and on my heart. See ya!

Cyrus ended the video in true Miley form, by sticking out her tongue.

ABC 7 reports that Hannah is now back in her local town in SoCal. She told reporters that the events of the night felt surreal, thinking at first that the sound of the gunshots were fireworks.

I remember saying, 'That's dumb.' And then two seconds later falling to ground. I thought I got tased or something. I wasn't really sure what happened.

Reportedly, a friend of Hannah's quickly used his EMT training to place a tourniquet on her. Later, she says a Marine she had never met before picked her up and escorted her to the hospital.

Both of Hannah's parents are touched and moved by the outpouring of support.

Her father, Michael Hannah, said, "There is no doubt in my mind that there were plenty of people watching over Katrina that night."

Cyrus is just one of the many celebrities who have been vocal about their heartbreak and rage over the Las Vegas shooting. Country singer Jason Aldean, who was performing when the shots began, posted the following message in the immediate aftermath:

Tonight has been beyond horrific. I still dont know what to say but wanted to let everyone know that Me and my Crew are safe. My Thoughts and prayers go out to everyone involved tonight. It hurts my heart that this would happen to anyone who was just coming out to enjoy what should have been a fun night. #heartbroken#stopthehate