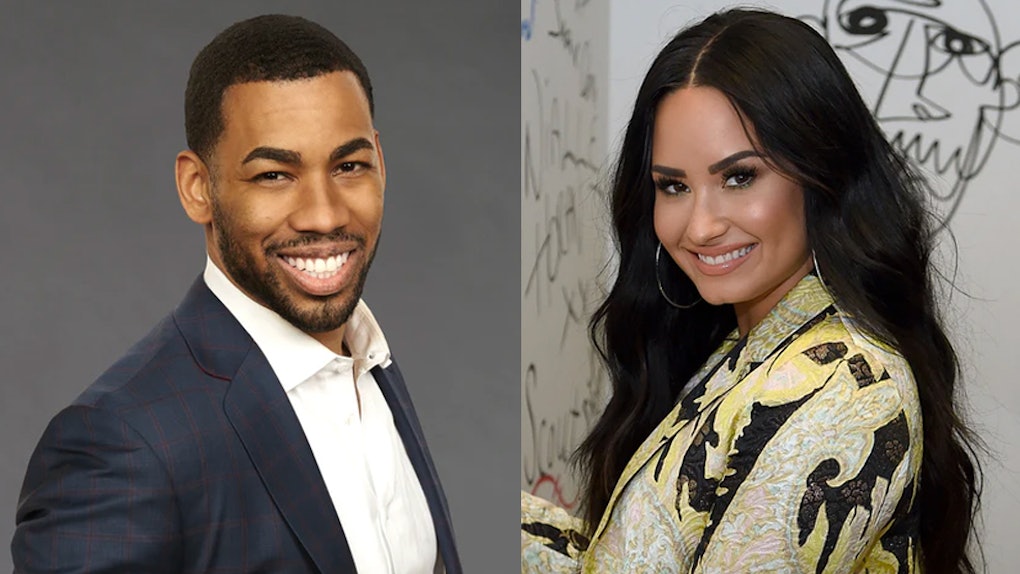 I used to think that getting tapped to be the next Bachelor or Bachelorette was the best outcome you could hope for if you didn't bring home that final rose. But between Tyler Cameron and Gigi Hadid’s rumored romance, and now Mike Johnson and Demi Lovato’s recent flirting on Instagram, I'm thinking maybe it’s better to stay single and ready to mingle with celebs instead. But, how suited for one another are Lovato and Johnson? Well, if Mike Johnson and Demi Lovato’s astrological compatibility means anything, then they really do have some power-couple potential. Great news, because I am so ready to ship these two.

In case you missed it, here is what has gone down between Lovato and Johnson so far. On Sept. 6, Lovato posted a photo of herself in a leopard-print bikini looking over her shoulder, but what made it really special is that she posted it unedited, both embracing her body and exercising her fear of judgment. "This is my biggest fear," wrote Lovato in the caption. "A photo of me in a bikini unedited. And guess what, it’s CELLULIT!!!! I’m just literally sooooo tired of being ashamed of my body, editing it (yes the other bikini pics were edited — and I hate that I did that but it’s the truth) so that others think I’m THEIR idea of what beautiful is, but it’s just not me. This is what I got." Johnson is apparently a fan of what Lovato's got. "Look at me like that again 😏 love yaself 🙌🏽,” wrote Johnson, a reply that earned him a kissy face emoji back from the singer. Aww.

OK, so that's a super cute start, but what can we divine about their potential dynamic if they ever take this off social media and date IRL? Johnson was born Dec. 27, under the sign of Capricorn, and Lovato's birthday is Aug. 20, which makes her a Leo. While these signs may not be the first that you'd probably pair up, on the rare occasion they come together, they have the potential to take the world by storm. Here's what else we know about Lovato and Johnson's astrological compatibility.

1. They Admire One Another’s Ambition And Heart.

Both Leo and Capricorn have strong work ethics, and are driven to be the the very best at what they do. Cap brings structure and a game plan to the equation, and Leo offers creativity and charm. Put these two together and anything is possible. Not only do Leo and Capricorn make for great lovers, but they are also awesome partners in the business of creating the best and most successful life together. Total power couple goals.

2. Trust Is Not An Issue For These Two.

At first, Capricorn could be put off or intimidated by the spotlight that always finds Leo (or is it the other way around?) because Capricorn tends to be more conservative. But once Capricorn understands that Leo actually has a good and more traditional heart than what you'd probably expect, they can feel comfortable opening up their hearts and, honestly, their busy schedule to let Leo in. It also helps that these two are some of the most loyal signs in the zodiac, provided they get the same in return. Leo can appreciate Capricorn's steadfast nature, and Capricorn, in return, enjoys the light and warmth that Leo brings to the relationship.

3. Their Sexual Chemistry Could Be Fire.

Capricorn may not be renowned for exuding sexual energy, but that's only until this Earth sign gets ignited by the heat of a fiery Leo. When these signs come together, Capricorn can discover a whole new sexual side they didn't even know they had. As you can imagine, that creates gratitude and admiration in Capricorn, which is basically the ultimate aphrodisiac for Leo who feels their most powerful and sexual when they have their partner's full attention. This cycle creates the kind of positive feedback loop that makes for a very hot and passionate connection.

I think it's safe to say that Lovato and Johnson have some real astrological possibility. I don't know about you, but I am so ready to see these two take their flirtation offline and embrace their power-couple potential.