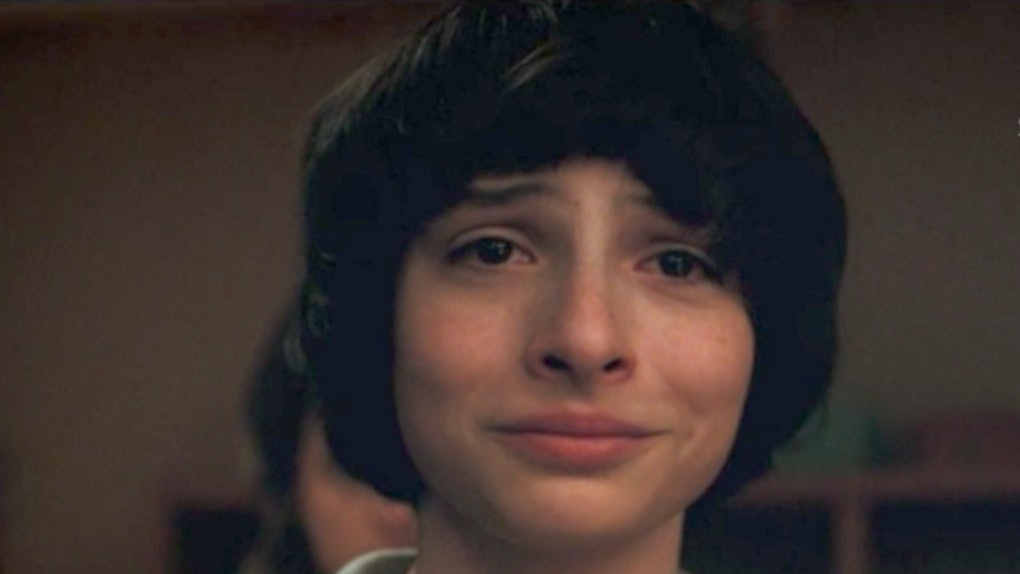 One of the most heartbreaking moments at the end of Season 1 of Stranger Things was watching Mike lose Eleven to the Demogorgon after the two had begun falling in love with one another. Warning: This post contains spoilers for Stranger Things Season 2. That pain and loss characterized Mike throughout the show's second season as well, until the very last episode. After torturing viewers the entire season by keeping Mike and Eleven apart from one another, Stranger Things ended on a heartwarming note by reuniting the two lovesick kids before the big final battle. And if you didn't tear up when Mike and Eleven reunited in the Stranger Things Season 2 finale, then you're just not human.

What made the reunion so emotional was the fact that Mike had been so despondent the entire season leading up to it, a notably change from the effervescent young kid viewers met in Season 1. Believing Eleven died in her exchange with the Demogorgon, Mike became more angry and depressed than fans have ever seen him. He took most of his frustrations out on Max, the new girl both Dustin and Lucas wanted to bring into their group, whom Mike seemed to view as an impossible attempt at replacing Eleven. He also related to Will (who was suffering from episodes that transported him back into the Upside Down) over their shared struggles thanks to the dark dimension.

To make things even more heartbreaking, Eleven could hear all of Mike's desperate calls to her on his walkie talkie thanks to her psychic powers, and she was alive and well only a couple of miles away in Jim Hopper's cabin. But even though she wanted to, she couldn't tell Mike any of this, because Hopper made her promise she would remain in hiding for her own safety. Her powers allowed her to hear Mike's calls, but not respond to them. Eventually, Eleven got fed up with Hopper's restrictive rules and ran to the middle school to see Mike, but of course it was at exactly the wrong time. She saw Mike and Max laughing and bonding with each other in the gym, and assumed he had moved on from her. Without revealing herself to him, Eleven ran off and instead focused on tracking down her mother, leading to a heart-pounding adventure with her long-lost fellow captee Eight, along with getting a cool new punk makeover in the process.

But, in the end, Eleven realized she needed to go back and help her friends, and boy does she know how to make an entrance. As a Demodog was about to attack everyone in the Byers house, it suddenly flew through the window and died. Then, the door opened and in walked the newly punkified Eleven. Mike's face said it all, as he looked on with a tearful smile, and Eleven rushed to hug him. Unfortunately, the reunion had to be cut short since Will was still infected by the shadowy Upside Down monster and Eleven needed to go close the gate to the other dimension. But although it couldn't last long, the reunion was still a hugely moving and a long-awaited moment after this season apart.

Mike and Eleven got a more extended, less stressful reunion after they managed to save the town (and the world?) from what they came to refer to as the Mind Flayer. In an incredibly sweet final scene, fans got to see all the kids attend the school's Snow Ball together. Lucas and Max finally made things official, Will was asked to dance by a random girl, and Dustin gained newfound confidence when Nancy asked him for a dance. But this left Mike sitting alone. That's when Eleven walked in, and the two began to dance and even shared a kiss. I think these kids are really going to make it.

More like this
Here's How To Vote For The Next 'American Horror Story' Theme Among 6 Options
By Cianna Garrison
This Reported Update About HBO Max's 2021 'Friends' Reunion Is Great News
By Cianna Garrison
'Never Have I Ever' Season 2: Release Date, Cast, Trailer, Photos, & More
By Ani Bundel
Stay up to date