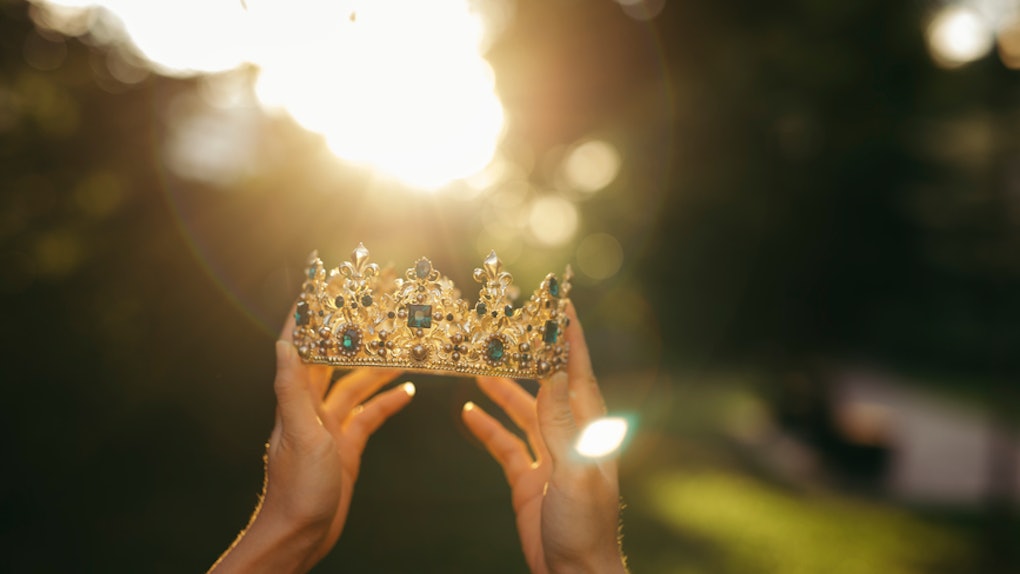 Two British body-positive advocates made internet waves this week when they posted photos on Instagram wearing Disney princess dresses. Michelle Elman and Amy Wooldridge's body-positive message to Disney called on the company to be more inclusive of different sizes and body types when creating their characters. Despite the undeniable nostalgia that Elman and Wooldridge feel for the Disney princesses of their childhoods, they strongly believe it's time to stray far away from images of thin, conventionally beautiful cartoon depictions of women, which so many young girls have grown up with, and which have shaped their definition of what a woman's body "should" look like.

Elite Daily reached out to Disney for comment, but did not hear back by the time of publication.

The request from the two body-positive advocates is clear as day, and comes with only good intentions: They want kids to see more princesses that look like them. Wooldridge shared an Instagram post featuring herself and fellow body-positive activist Elman wearing beautiful Disney princess dresses.

Disney has such a special place in my heart, but it’s undeniable that it sells a very particular beauty ideal, and we place a lot of value on that ideal. Then we grow up and realize they’re just cartoons and not real people, but we’re still fed a more human (albeit unrealistic for many) version of that ideal.

"In all honesty, I'm tired of seeing the same bodies represented again and again," Wooldridge continued in her post.

Wooldridge got even more specific with her demands for Disney, explaining how deeply necessary it is for the images of childhood heroines to be depicted by a diverse range of princesses — depictions that honor and celebrate all types of people, or, as a Wooldridge wrote, "A princess that hasn’t had her body drawn from the same stencil as all the others."

Furthermore, Wooldridge also points out that, oftentimes, the characters who are fat or who have different body types are made to be villains, or used as comic relief, like Ursula in The Little Mermaid, LeFou in Beauty and The Beast, the Queen of Hearts in Alice in Wonderland, or Philoctetes in Hercules.

Those characters who have more unconventional bodies, she points out, for the most part, don't get the fairytale happy endings. And yes, those messages are internalized by the little girls watching it all unfold.

Like it or not, our perception of ourselves is tied to how we see people like us being treated. We see fat being treated as undesirable so we assume it is. We see being desired as a goal, and so we do whatever we can to reach that goal — regardless of how detrimental it may be to our mental health.

To be clear, this doesn't mean that the stories she and Elman hope to see, depicting bodies other than the current convention, should be about having a "different" kind of body. The depictions should help communicate that all bodies are great, and all bodies are the norm, by showing these much-needed characters having wonderful and adventurous stories to tell that do not focus on their bodies.

That’s why I want a fat princess. Not a princess whose story is about being fat. A princess who has all of the amazing adventures that her predecessors had while being fat. We need representation of all the magnificent and wildly different bodies there are, and stories that don’t primarily focus on that.

And while it might seem like you can't teach a Disney dog new tricks, steps have already been taken to recognize and illustrate a world in their films and shows that is not totally homogenous, white, and heterosexual. Some examples include Disney's adventurous Polynesian heroine Moana, as well as the portrayal of the character Le Fou as a gay man in the recent live action Beauty and the Beast film. But it's time to keep going, and to go further.

Elman, who is a body-confidence coach, wrote in her own Instagram post that, until we do go further with these diverse portrayals in media, she and Wooldridge are happy to serve as stand-ins for the "childhood dream you never knew you wanted of having a fat (and Scarred, although you can’t see it!) princess."

"How incredible would it be if the epitome of beauty and the envy of many little girls wasn’t so equated to thinness?" Elman asked in her post.

Here's to hoping their message is not only heard, but swiftly acted upon.