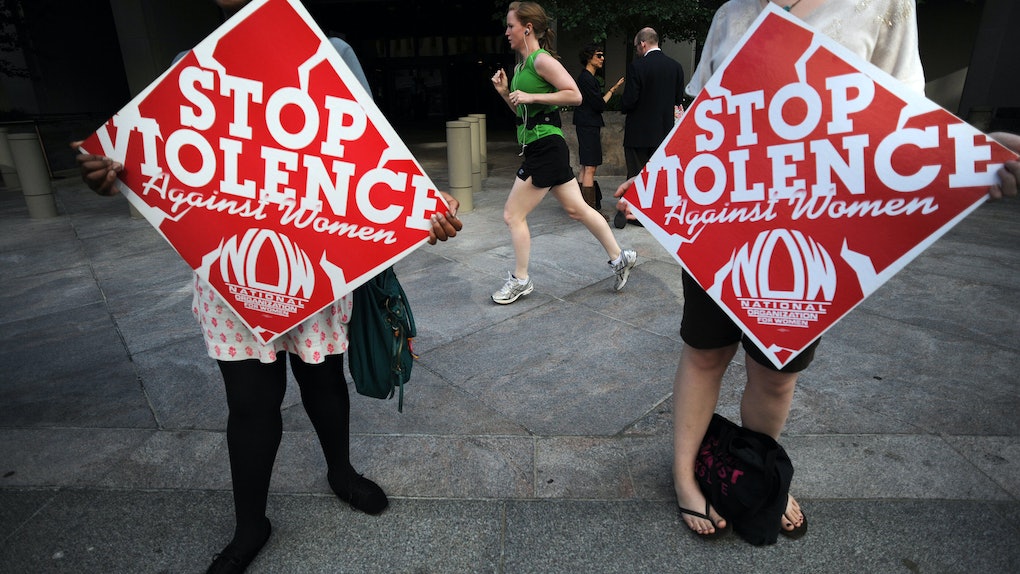 On Sunday, Oct. 15, women began using the hashtag #MeToo to out themselves as having experienced sexual misconduct of some form. It was a highly remarkable movement, as it completely filled Facebook and Twitter timelines across the nation, highlighting how widespread and commonplace an issue sexual misconduct is. As #MeToo emerged in this hashtag iteration (it has existed as a movement for 10 years, started first by Tarana Burke) men started posting #MeToo-inspired statuses of their own, many citing their own culpability in contributing to rape culture and expressing that they "hadn't realized" how much of an issue this was to the many women in their lives, using hashtags like #ItWasMe, #IDidThat, and #HimThough.

I know I should be happy about that, as it's a good step for men to publicly acknowledge their wrongdoing(s) and to better understand women's daily lives. But I'm having trouble applauding men for learning about the real world.

Sexual harassment exists all over the place. Why then did it take an entire Twitter timeline to teach men of that fact? Has no woman ever mentioned it to a single living, breathing man before? Do men need to hear it from a couple dozen women before they feel they can believe it? Why does it take thousands of women publicly dredging up their traumas for it to be real?

To be blunt, I can't stand to see another self-congratulatory social media status from a man who clearly hasn't been paying attention or listening to or believing women, because I know if he had paid attention, or listened to, or believed the women in his life, this wouldn't be new information. There wouldn't be shock over the fact that this happens everywhere, to almost every woman, at any time. Men posting about what they've done wrong in the past, often using the hashtag #ItWasMe, don't get absolved for going public. A viral hashtag on social media doesn't negate or erase the trauma women have lived through because of what a man (or men) did, didn't do, or were complicit in allowing. And, frankly, men's postings only serve to take away space from women's voices. Just let us speak. For once.

I also know I'm not the only woman who's seen one of these "we need to do more" posts from a man in my life who I know has not treated women well, writing as if he'd already been doing something to help, and now it's the fault of all those other men not stepping up. Though I realize no one can deny the pull of those potential likes — that self-serving idea that if you post something relevant and hip, you'll get scores of affirmations in the form of favs and retweets — those posting "for the likes" are not what cultivates enduring, lasting change in the lives of the women they know, the women they respect, and even the women they love.

Like many other women, discussions around sexual harassment over the past two weeks (since allegations of sexual misconduct came out against super-producer Harvey Weinstein on Oct. 5, which he has since denied) have prompted all my worst memories to come flooding back in vivid detail. I've been thinking a lot about a Halloween in college; my friends and I dressed up, me in a short dress. Two of my close male friends and I went on a beer run at our regular bodega near campus and while there, a man standing in the doorway shouted vulgar comments at me. I stayed as close to the back of the store as I could, gritting my teeth and pretending it wasn't happening — a self-preservation tact that, as a woman, I've grown used to using. My friends tensed up, were anxious, and paid for the beer. We slipped out of the store.

On the walk back to campus, one friend asked if this has happened to me before. Yes, I said. My friends were shocked and apologetic. I used to feel gratified that they'd had the firsthand experience, and so they learned, and hopefully that meant they'd believe other women in the future. But fast forward exactly five years later, and, thinking back on it, I'm so angry that they didn't do something in the moment, even something as reflexive as choosing to stand with me and talk to me as I shrunk into myself in the back of the bodega, wishing I could erase my body and feeling stupid for dressing cute for Halloween.

Because ultimately, learning helps no one unless it's paired with action.

Too often, millennials think that if you just post something publicly about an issue, you've done something to help solve it. But, as with most issues, it takes more than a tweet to fix rape culture — and with this issue, men don't even have the option of simply donating some money to an organization doing the work so that they can say they've done something. It takes actual work, every day, from men to stop sexual misconduct. It takes examining one's own treatment of women and speaking up to one's friends when they say or do something disrespectful.

Those steps have to be taken every day, because women face an unequal society every day. While a man can post a Facebook status saying they've done wrong, get praised for it, and move on, women live with both the trauma of men's previous actions and the threat of men's future actions all the time. Not to mention, women have to deal with the internalized shame we're taught to inhale as if we're somehow at fault for what happened to us because of what we were wearing, what we said, and the way we looked.

I hate that I have to take on the emotional labor to explain this, because women always have to take on the work to explain this, but there's a simple answer here in what men (especially millennial men) can do to help women: Just be better. Be better every day and encourage other men to also be better every day. And what does it mean to be better? It means treating women like human beings in the same way men are treated, and it means treating women like they don't owe you anything, because women don't owe you sh*t. That's daily action, not a once-a-year public proclamation or donation.

Congratu-freaking-lations on your Facebook likes, but what are you doing about it?