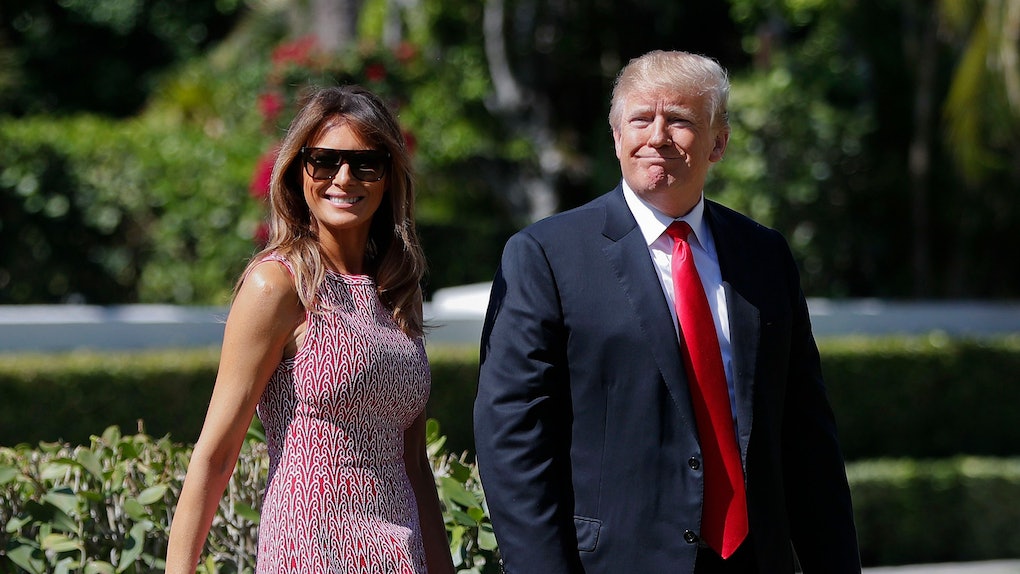 On April 1, President Donald Trump and first lady Melania braved the cameras together as they arrived at church for Easter Sunday mass — and they did so side by side. Their proximity, though, was only one clue as to how the couple might be faring after they've endured a tempestuous couple of months in the news cycle. As it turns out, Melania and Donald Trump's body language on Easter gives some hints into the current state of their relationship.

To demystify what their dynamics meant, I spoke with body language experts Patti Wood and Traci Brown, both of whom authored books on the subject. There were two main appearances they mined for analysis: first, when Trump and Melania arrived at church in Florida, and second, when they landed back in the capital later that day.

For context, Sunday marked one of the first public appearances for the couple following a tense couple of months. Adult film star Stormy Daniels and former Playboy model Karen McDougal have both recently come forward about alleged affairs they had with the president. Based on their accounts, the sexual encounters would've taken place when Melania would have been pregnant with their son Barron. (Trump and the White House have repeatedly denied allegations of both affairs.)

How the president and first lady behaved around each other on Easter reveals some clues as to where they are as a couple following the scandals. Overall, the couple were surprisingly in-step and in-sync with each other, something both experts said they haven't seen a lot of from the president and first lady. But that certainly doesn't mean it's all roses for them, and their interactions bring up other questions for the experts.

That Trump waited for his wife on both occasions, both when de-boarding the plane and when they arrived at the church, was a significant change from his regular habit of walking ahead of Melania. Woods adds that their proximity while standing — and in particular, Melania's angling of her body towards her husband — indicates a willingness on her part to appear as his partner.

However, Trump didn't keep in step with his wife the whole time, and that's telling. At around 28 seconds in, in the video below, Trump turns and walks just ahead of Melania and reaches back for her hand. This is the old left-behind habit we've seen before. Wood says it indicates a power move, conveying that one person is in charge of the other, such as a parent-child dynamic.

"If there'd been a subconscious feeling [for Trump] that, 'I want to show her that she's my number one for me or she's my priority', he would've waited. He doesn’t wait for her," Wood says. "His subconscious is still saying, 'I'm still number one.'"

There was another awkward hand-holding moment that may be telling of their dynamic, too. This moment came when they de-boarded Air Force One in Washington D.C. later on Sunday. As they walk down the stairs, at around time 5:45 in the video below, Trump motions with his right hand in what appears to be an attempt to hold hands with Melania.

Both Wood and Brown confirm that Trump definitely was trying to grab her hand, but her coat interfered. As for what that means, there's a few possibilities.

"He didn't feel comfortable making the entire effort for fear of being rebuked," Wood says. "If you're confident in your mate, when you're going to hold hands, you're not going to stop part way … especially if that used to be their baseline normal behavior. ... To me, that's a tell. There's a part of him that feared that she didn't want to hold hands back."

Brown agrees that Trump certainly didn't make a serious effort to hold his wife's hand, and Melania certainly didn't meet him halfway. "He tried, but he didn't try too hard," Brown says. "It's something that he's either come to accept or something he doesn't worry about too much."

This isn't the first time that Melania's coat has stood in the way between her and Trump, Brown adds, and may be evidence of a larger pattern. "She does this a lot, and it may be an unconscious way to block holding hands with him," Brown says. "It happens a lot, and I think that's probably part of the reason."

Wood believes the couple's recent public showing in the wake of the affairs drama has revealed very different emotions from what was showcased on Sunday. The fact that their apparent mood had changed so dramatically in such a short time presents a big question for Wood. "It was stunningly apparent that they were angry," Wood says of an Instagram photo of them from March 22. "That was very recently ... so I'm wondering, what's happened? Is [the Easter appearance] just a photo-opportunity kind of affection?"

Wood thinks the couple may have been coached to temper their body language in public. While she sees large-scale changes in their dynamic — such as Trump waiting for Melania and walking with her — these are changes that could be taught and learned. But Wood isn't picking up the subconscious movements, which indicate genuine emotion. "It looks like he made a very conscious decision to wait at that doorway and come down with her," she says. "But I'm not seeing the little cues I want to see that say, 'Yes we're a happy couple.'"

When asked if she thinks Trump's emotion towards his wife was genuine, Brown also said she suspects there was outside influence. "I'm willing to bet he’s been coached a little bit," she says. "I don't know how much he listens to coaching, but someone may have said something."

On the other hand, Brown says, it's entirely possible that the couple may be genuinely turning a new page — a phenomenon that often happens after reconciling with the reality of an affair, for example, when all is out in the open.

It's impossible to know without other examples whether Sunday's in-sync appearance was the beginning of a new dynamic or just an anomaly. But it certainly showed a concerted effort on the part of both Trumps to appear that they were on solid footing. The big question is whether that was authentic or not.