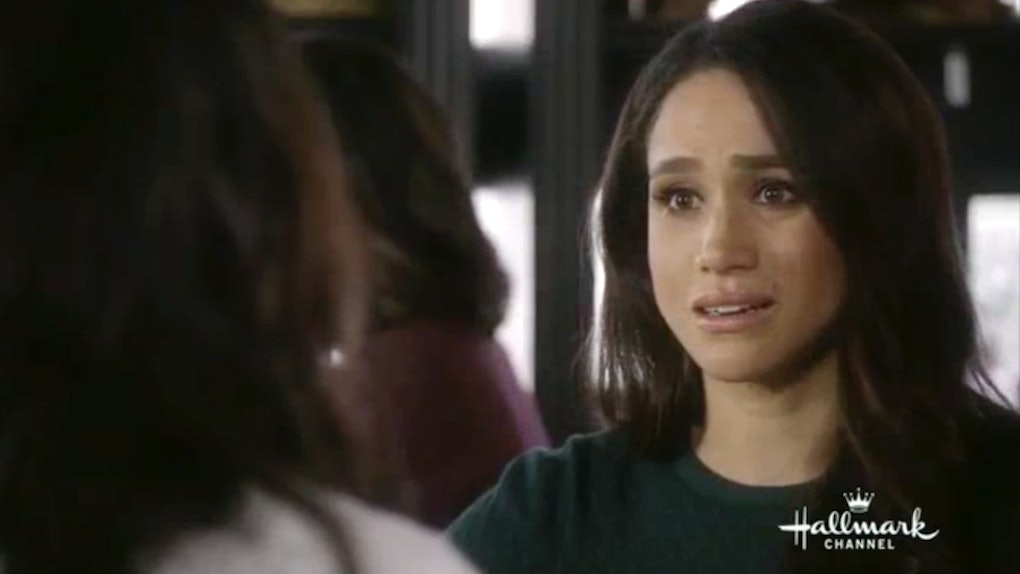 Before she was about to become a legit princess (okay, I guess technically duchess), Meghan Markle was dealing with all the dating problems the rest of us common folk experience. Or at least... her character in her made-for-TV Hallmark Channel rom-com was. In honor of Markle's engagement to Prince Harry, I watched Meghan Markle's Hallmark movie, Dater's Handbook, and discovered that this movie totally tells the story of Markle's decision to start dating Prince Harry. Like seriously, it's uncanny.

The basic details of Dater's Handbook are pretty much what you would expect from any cookie-cutter romantic comedy: Cass (Meghan Markle) just can't seem to find the right guy for her, so she begins to follow a trendy dating advice book in order to help her decide between two totally different guys she is seeing. The book (which shares a title with the movie) pushes Cass to choose a man who is "consistent, predictable, and average in every way," as its author, Dr. Susie, puts it. That would be the stick-in-the-mud insurance adjustor George (Jonathan Scarfe), but Cass only really feels sparks with the more adventurous, goofier Robert (Kristoffer Polaha). Of course, you already guessed how the movie ends: Cass throws out the misguided dating handbook to follow her heart instead, and ends up with Robert.

Yes, it's as cheesy, schmaltzy, and predictable as pretty much every romance movie that airs on the Hallmark Channel, but the core message of Dater's Handbook actually does seem to fit Meghan Markle's relationship with Prince Harry eerily well. I mean, the whole movie is about Cass learning that she needs to be with someone who knows how to have fun and keep life interesting, and lo and behold: Markle found that same type of guy just a couple months after Dater's Handbook aired at the beginning of 2016. After all, who is more the opposite of the "consistent, predictable, and average in every way" type of dude that Cass realizes she doesn't want to be with than Prince Harry!?

While watching Dater's Handbook, I found myself drawing parallels between the two men Cass was struggling to choose between and England's two princes. I know this is totally unfair to Prince William, who I'm sure can be a ton of fun behind closed doors, but the character of George seemed to mirror Prince William's stiff upper lip, rule-following, etiquette-trained persona. Of course, the movie took this fastidiousness to a cartoonish level in George, who even goes so far as to critique Cass' toddler nephew for not wearing a blindfold while hitting a piñata.

On the other side of things is Prince Harry's analogue, Robert, who is shown to be the fun one: he enjoys mini-golf and bowling, he makes bad jokes and laughs at Cass' bad jokes, and what the movie seems to put forward as most important thing of all, he lets Cass steal whatever food he is eating. Like Robert, Prince Harry has developed the reputation of being the more unpredictable and fun-loving member of the royal family. In another case of life imitating art, Meghan Markle did just what Cass wound up doing in Dater's Handbook and went for the exciting, extraordinary guy who explicitly breaks the stuffy, old mold. Maybe Prince Harry caught Dater's Handbook when it premiered on the Hallmark Channel back in January 2016 and knew that he had to have a shot with the lead actress? After all, the couple did only start dating about five months after that movie premiered.

Meghan Markle and Prince Harry have set their wedding date for next summer, and Markle is expected to receive the title of Duchess of Sussex during the nuptials. Maybe they will have Dater's Handbook playing on screens at the reception.

More like this
Meghan Markle's Wreath For Prince Philip's Funeral Was Full Of Meaning
By Cianna Garrison
17 Tweets About Simu Liu In The 'Shang-Chi' Teaser, From Proud 'Kim's Convenience' Fans
By Dylan Kickham
Kristen Wiig Is Making A Musical About Cinderella's Evil Stepsisters For Disney
By Dylan Kickham
Stay up to date