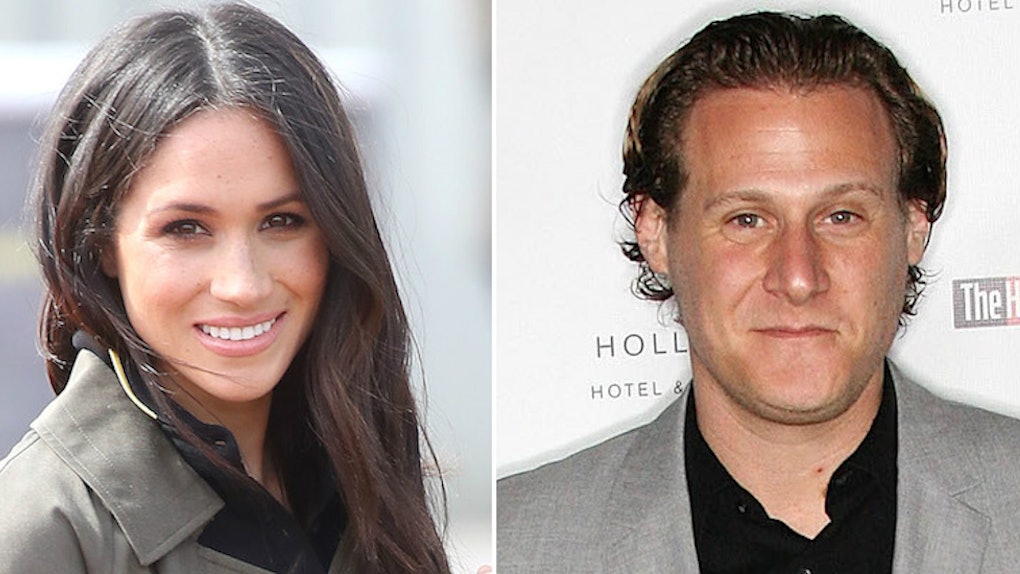 It's no secret that Meghan Markle was once married to producer Trevor Engelson, but now we're learning a little more about Markle's ex's love life! Markle and Engelson got divorced in 2014, and it's been revealed that Meghan Markle's ex-husband dated Bethenny Frankel of The Real Housewives. I am shook. In an interview on an Australian radio show called the Kyle and Jackie O Show on Monday, April 9, Bethenny Frankel revealed she once went on a date with Trevor Engelson after his divorce from Meghan Markle. *Jonathan Van Ness voice* Can you believe?!

Before you ask, no. They were never in a relationship. They didn't even make it to the second date, according to Frankel. But they did go on one, and they did talk about Markle's engagement to Prince Harry after it happened. "I met this guy as a romantic interest," Frankel said on the show.

His name is Trevor. I met him in Chicago and we were supposed to go out, and I ended up seeing him one time and he'd been texting me. He's a producer in L.A. He told me that he was married before. He's divorced [now]. He was married to this girl named Meghan Markle from the TV show Suits.

Just a casual namedrop there, Bethenny! The Real Housewives star said her short-lived romance with Engelson died out swiftly, but they actually are considering working together to produce a TV show now. "He pitched me a TV show idea to produce together about a bunch of businesswomen, which I think we are going to do," Frankel said, adding that Engelson actually reminds her of her own ex-husband. "He looks a little bit like my ex," she said, "which scares me."

We bypassed the romantics and went into the business. But I don't know there's something there. There's something salacious about doing a TV project with Meghan Markle's ex.

Of course, there's no way this interview would end without Frankel spilling the tea on her convo with Engelson after Prince Harry and Meghan Markle's engagement was announced. Frankel said she texted Engelson after the announcement. She reportedly texted him, "Holy sh*t! Your ex is going to be a princess. Is that crazy?" I'd say it's a little wild, yeah! Unfortunately, Frankel didn't reveal what Engelson's response to this text was, or if he even responded at all. But just knowing this text exists is so much fun.

Markle and Engelson dated for six years before getting engaged in 2010 and married in 2011.

They got married on Sept. 10, 2011, in Jamaica, but not long before they got married, Markle was cast in Suits. Their marriage didn't last much longer after that. According to The Sun, Markle and Engelson's first months as a married couple were spent in a long-distance relationship because Markle was filming Suits in Toronto and Engelson lived in L.A., where he worked as a producer and a manager for actors. They cited "irreconcilable differences" as the cause of their divorce.

According to Andrew Morton's tell-all about Markle titled Meghan: A Hollywood Princess, however, Engelson didn't see the divorce coming. An early excerpt of the book reportedly said of the couple's split,

A wealthy entrepreneur friend claimed the marriage ended so abruptly that Meghan sent her wedding and engagement rings back to Trevor by registered post. Another confirmed that the decision to end the marriage was made by Meghan and that it had come 'totally out of the blue.'

Yikes. Markle and Engelson have not commented publicly on the report in the book. Whatever the truth is, it doesn't seem like Markle and Engelson are on speaking terms, which is understandable. Prince Harry's ex, Chelsy Davy, however, is reportedly being invited to their wedding because Harry and Davy dated for nearly a decade and are still good friends. Maybe Bethenny Frankel and Trevor Engelson will watch the live stream of Harry and Meghan's wedding together? No? Too soon? I'm an asshole for saying that? Got it.