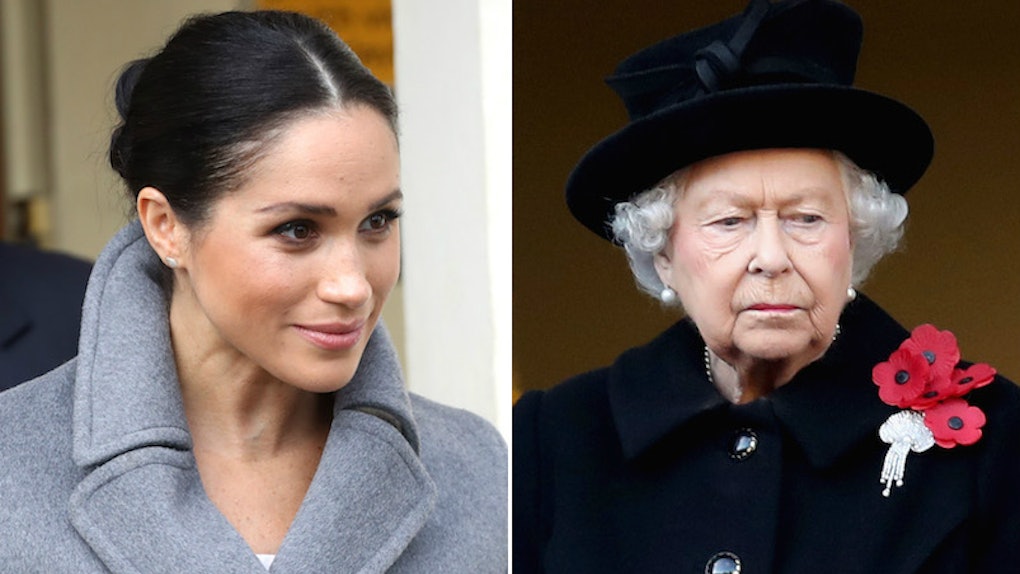 Meghan Markle & The Queen Disagree On How To Deal With Her Dad Drama, According To Reports

I don't know about Meghan Markle, but I am tired. If you've been following the Duchess of Sussex you know she's had one hell of a year. She, of course, famously married the Duke of Sussex, Prince Harry, and is currently pregnant with their first child. All the while, She's been combating negativity and Drama with a capital D from her father, Thomas Markle Sr., and half-sister, Samantha Markle, left and right. Now, reports are saying her family's comments are taking a real toll within the palace walls, too. According to reports, Meghan Markle and the Queen disagree on how to handle her father and his incessant negative public narrative about his daughter. Now, I don't know much about royal stuff, but I can assume being at odds with the Queen isn't great. Elite Daily reached out to Kensington Palace for further comment on the reported disagreement, but they declined to comment.

Thomas Markle's new "thing" is stating that his daughter is "ghosting" him. TBH, he isn't totally wrong. Meghan's proven her chosen approach to handling her father is to avoid engaging with him at all costs. In his first interview since Meghan announced her pregnancy, Markle told Piers Morgan on Good Morning Britain how completely rude he finds her silence to be. "She’s always been a very controlling person and that’s part of her nature," he said, "but she’s never been rude. The ghosting I don’t completely understand. She’s always been in charge, that’s her nature. But she’s always been polite.”

While many people can probably understand Meghan's decision to avoid publicly addressing her father and his remarks, apparently one very important person disagrees. According to a source who spoke with Vanity Fair, the Queen has wanted to step in and do something, and reportedly, Meghan has pushed back. The source explained,

[The Queen] was very concerned that it was spiraling out of control, which it was. Buckingham Palace wanted to be able to do something and be proactive and make the situation go away. It was a direction from the Queen, so her courtiers were under strict instructions to sort it out. But Kensington Palace was not singing from the same hymn sheet, and that was because the message was coming from Meghan. She didn’t want to engage and thought that she could handle it on her own.

Uh oh. The source continued, "There was a lot of tension between courtiers within the two royal households, and I think it just got to a point where it was stalemate and, you know, neither could move."

So, this is my question... Can people really just ignore the Queen's wishes? It seems like that simply wouldn't be how this whole thing would actually go down. Even with this report, my hope is that while the Queen might have made her opinions known to Meghan, they still share a mutual respect. Obviously, Meghan and her father's dynamic is uncharted territory for everyone involved and, with any luck, it will hopefully smooth over in the near year.