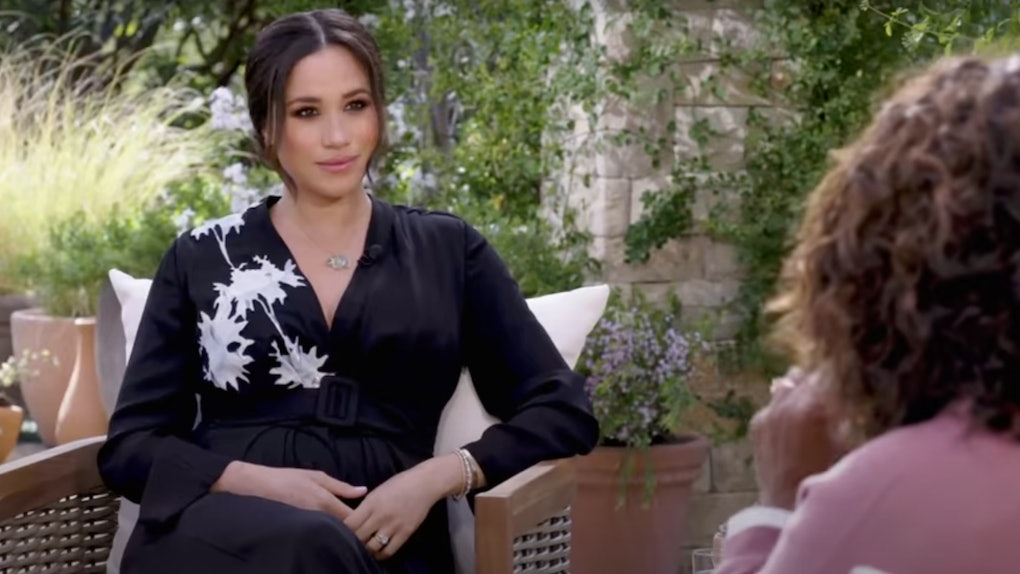 As more info about Meghan Markle's upcoming tell-all interview with Oprah Winfrey hits the internet, the royal drama is spiraling out of control. The Duchess has made several shocking admissions in the preview clips for the segment, which is slated to air on March 7. The latest? Meghan Markle said she was forbidden from doing an Oprah interview as a royal.

Several short preview clips have been released ahead of the interview which will also feature Prince Harry. But with the first extended clip from the interview, Oprah and Meghan dished out some serious tea. For starters, Oprah recalled the time Meghan was forced to dodge her request for an interview ahead of her 2018 wedding to Harry.

She then pointed out how liberating it has been to make her own decisions after quitting life as a royal and relocating to the United States.

"As an adult who lived a really independent life to then go into this construct that is different than, I think, what people imagine it to be, it's really liberating to be able to have the right and the privilege in some ways to be able to say yes," she told Oprah. "I mean, I'm ready to talk."

"To be able to make a choice on your own and just be able to speak for yourself," Meghan added.

You can see the extended preview clip below.

Meghan and Harry's joint interview is slated to air on CBS on March 7, and will hold nothing back. The first preview to be released showed Meghan responding to the question on everyone's mind: "How do you feel about the Palace hearing you speak your truth today?" Oprah asked.

Meghan remarked that it was due time for her to take a stand against "false" information that has been spread about her.

“I don’t know how they could expect that after all of this time we would still just be silent if there is an active role that the firm is playing in perpetuating falsehoods about us,” Markle said.

Speaking of false info, Meghan is insisting that recent reports which claimed she "bullied" staff members at Buckingham palace are fabricated lies. She hit back at the rumors, calling them a "smear campaign" which was not so coincidentally timed with her eye-opening interview.

As Meghan and Harry's lives become more and more distant form the royal family, the drama surrounding them has failed to diminish.