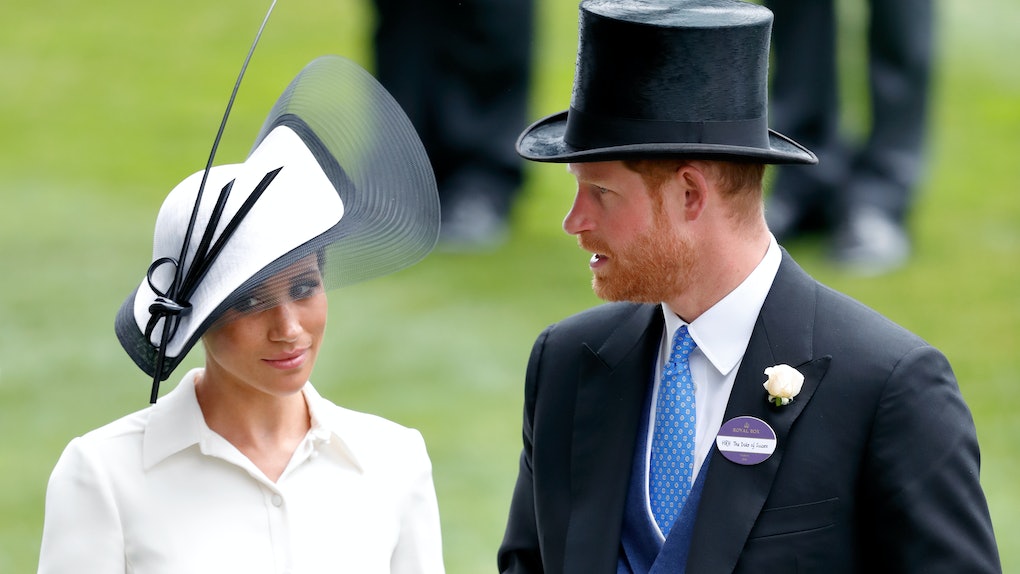 This may not come as a surprise after their bombshell interview with Oprah Winfrey, but Meghan Markle and Prince Harry have reportedly ditched their royal logo. The reported new logo was revealed by an image posted to the Twitter account of Robert Clark School on March 11. The photo was of a letter Meghan wrote to the school in honor of International Women's Day. Rather than featuring their royal monogram, the top of the letter features the Archewell logo.

Archewell is the organization Harry and Meghan founded after stepping down as senior royals. The organization includes a foundation, an audio division, and a production division. "At Archewell, we unleash the power of compassion to drive systemic cultural change," its site explains. "We do this through our non-profit work within Archewell Foundation 501(c)(3), in addition to creative activations through the business verticals of audio and production."

The Archewell logo features a stylistic "A" over a "W" within the parameters of a black oval. Along with an image of the letter, the school wrote, "We had a very special delivery this week. It has been lovely to share this letter and advice with the students and remember our International Women’s Day celebrations last year."

In the letter, Meghan, who visited the UK school last year when she and Harry were wrapping up the last of their royal engagements, reminisced upon her time spent there. “It was this time a year ago that I had the pleasure of meeting so many of you during my visit to celebrate International Women’s Day and mark the 50th anniversary of the Equal Pay Act,” Markle wrote in the letter. She later went on to mention Archewell specifically, writing, "this International Women’s Day, in collaboration with the work of our non-profit organisation, Archewell Foundation, we are encouraging everybody to participate in real acts of compassion for the women in their lives and their community."

So, um, why is using the Archewell logo such a big deal? "The key change is likely to reflect the Queen's decision to prevent Meghan and Harry from returning to public service a year after they stepped away," British publication The Express said. "Last month, the Palace confirmed the Sussexes would have to give up their key royal patronages and that Harry would have to return his honorary military titles to the crown. While the couple have kept their HRH styles and Duke and Duchess of Sussex titles, they are not meant to use them in connection with their work going forward, which may be why the letter does not feature the royal monogram."