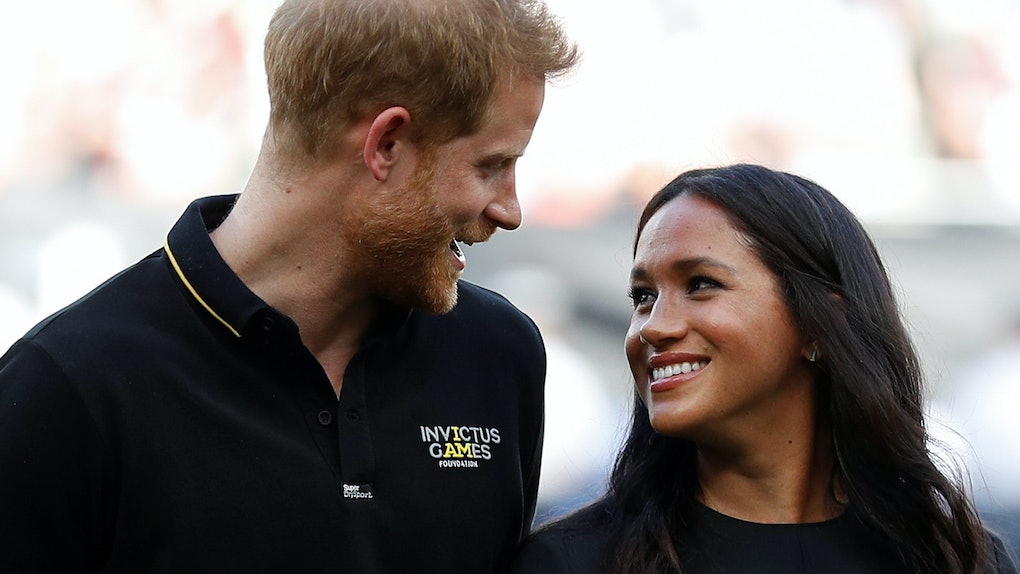 Another day, another opportunity to criticize the royals. Meghan Markle and Prince Harry are constantly under fire, from the way they wished their nephew happy birthday to — well, basically nothing is off the table, including holidays. (I love that word way more than vacay). Meghan and Harry's rumored trip to Ibiza has royal fans p*ssed. See, they reportedly traveled there on a private jet, which environmentalists are not happy about. Elite Daily reached out to Buckingham Palace for comment about the reports regarding Meghan and Harry's rumored trip to Ibiza, but did not hear back by the time of publication.

So here's what reportedly went down: The Duchess of Sussex turned 38 on Aug. 4 (happy birthday, girl!). Of course, she wanted to celebrate with her hubby and baby. According to Daily Mail, Markle, Prince Harry, and baby Archie vacayed from Aug. 6 to Aug. 12. Sounds like such a beautiful birthday.

However, fans are outraged after learning the royals reportedly traveled by private jet — a form of transportation that's more harmful to the environment than flying commercial — despite advocating for climate change. As Daily Mail explains, a private flight from London to the Ibiza is said to emit six times more carbon dioxide per person than a scheduled commercial flight and the flights there and back are said to spew out 12.5 tons of carbon dioxide, which is a lot of pollution.

To be fair, we're talking about the royal family, who need intense security at all times, and their reasoning for flying private is arguably more nuanced than some are willing to acknowledge. Still, I can see how the situation becomes a bit contradictory considering Prince Harry suggested he and Markle may not have more than two kids in order to save the environment. As a result, eco-activists are dragging the royals for what they think is fake activism.

"They both an absolute joke!!! Saving the planet by only having two children, then private jetting all over accompanied by local trips by helicopter. Who are they trying to fool?!" tweeted one angry fan.

"It's a joke them using planes like we use cars and lecturing us on climate change," wrote one fan. "To them we are peasants that should cut back so they can indulge in their gold plated lifestyles." Ooof, harsh.

"What a pair of hypocrites," wrote another.

This comes days after Prince Harry was called out for reportedly preaching the green gospel (talking the environment and humanitarianism while barefoot) at Google Camp, a climate change summit in Sicily, and then flying out by a private jet funded by Google.

"Prince Harry just doesn’t get it, does he??" posed one fan. "Flying by private jet and helicopter to the ultra luxe Google Camp to deliver a speech on climate change & how we all have to save the world... was a BA or EasyJet flight not available?! He used 25 times more C02 just one way!"

"He has been really disappointing lately... I had high hopes for him," wrote another.

The summit itself is also causing a stir as it is reported Google chartered in numerous eco-conscious celebs, including Leonardo DiCaprio and Naomi Campbell, on private jets and leaving behind a massive carbon footprint. Yikes! Who knew being a high-profile eco-conscious celeb could be so difficult?

I imagine trying to get from one event to another, quickly and without hassle, isn't easy when flying commercial — especially for a high profile celebrity or a literal prince and duchess. So this is definitely a pretty complicated issue. Maybe take a ferry next time?