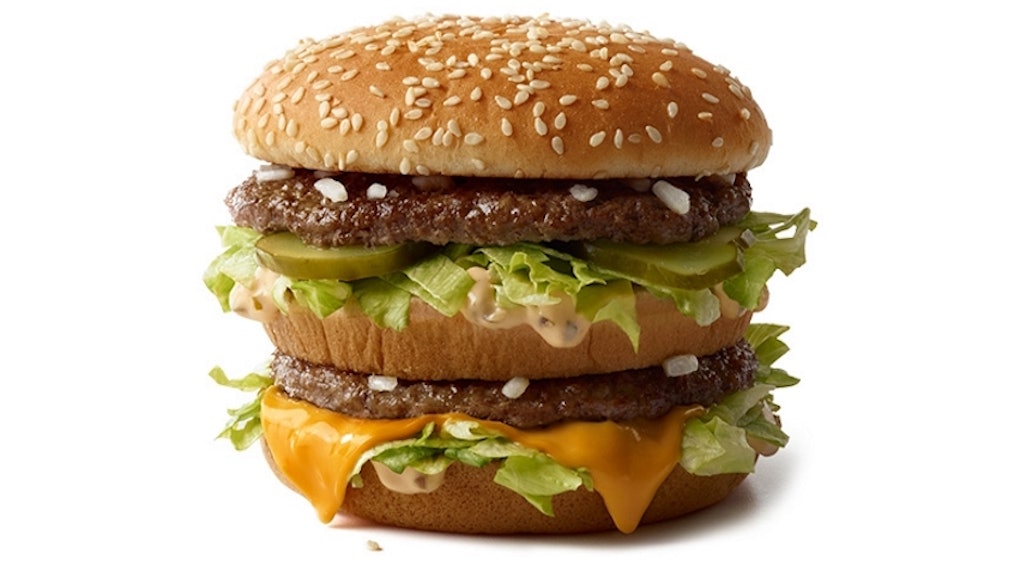 If you're a fan of McDonald's legendary dollar menu, you're not the only one. The dollar menu offers so many classics like McChickens and Cheeseburgers at a truly unbeatable price. The fast food chain is outdoing themselves this fall with a 1-cent Big Mac promotion in partnership with DoorDash. On top of 1-cent Big Macs, there's also a whole lot of cash up for grabs. McDonald's and DoorDash's 1-cent Big Mac giveaway could win you $ 1 million — all from the comfort of your own home.

In a Sept. 30 press release sent to Elite Daily, DoorDash and McDonald's announced the nationwide rollout of McDelivery. To celebrate the partnership, McDelivery is offering Big Macs for only 1 cent each (plus fees) from Sept. 30 through Oct 4. To get your hands on a sandwich, just enter the promo code "1MBIGMAC" when checking out on DoorDash — it's really that simple. However, there are only 1 million Big Mac sandwiches for 1 cent available nationwide, so don't waste any time when ordering. There is also a limit of one offer per person, so unfortunately, you won't be able to stock up on 1-cent Big Macs this time.

There's also a wild grand prize for one lucky customer who takes advantage of the 1-cent Big Mac promo: All customers partaking in the promo will automatically be entered for a chance to win $1 million in cash, and a winner will be randomly chosen at the end of the promotion. Even if you don't purchase a 1-cent Big Mac, you can still enter to win the $1 million during the Sept. 30 through Oct. 4 entry period. To do this, simply send an email to entry@amoeenry.com, and include your first/last name, city, state, ZIP, and telephone number in the body of the email. In the subject area, put the date you are sending the email in (mm/dd/yy) format. Note that you have to be over 18 years of age and live in the United States to participate in the $1 million sweepstakes.

McDonald's and DoorDash originally partnered to bring McDelivery to over 200 restaurants in Houston in July. The overwhelming positive reviews of the service has prompted the companies to expand to more than 10,000 restaurants nationwide by the end of the year. "Since rolling out our national partnership with McDonald's in July, we've been blown away by the excitement and demand from our customers," said Toby Espinosa, VP of Business Development at DoorDash, in the press release.

When thinking of how we could celebrate the nationwide rollout of McDelivery through DoorDash, we knew we had to go BIG. We're so excited to offer 1 million customers a [1-cent] Big Mac and a chance to win $1 million.

If you're a diehard McD's fan and want to continue getting Big Macs delivered right to your doorstep even when the promo ends, I'd consider joining DashPass, DoorDash's nationwide subscription program. As a DashPass member, you'll get unlimited $0 delivery fees on orders of $12 or more for just $9.99 a month, so it's definitely a bang for a bang for your buck.

With the wide availability and low cost of fast food delivery, eating good food without leaving the house has never been easier.

More like this
Lenny & Larry's Summer Snackin' Sweepstakes Could Win You A Free Glamping Trip
By Daffany Chan
Taco Bell Is Testing A Plant-Based Meat "Cravetarian" Taco With All Your Fave Toppings
By Cianna Garrison
Does Panera Deliver Near Me? Your Fave Soup & Sandwich Joint Just Expanded Its Options
By Daffany Chan
Stay up to date