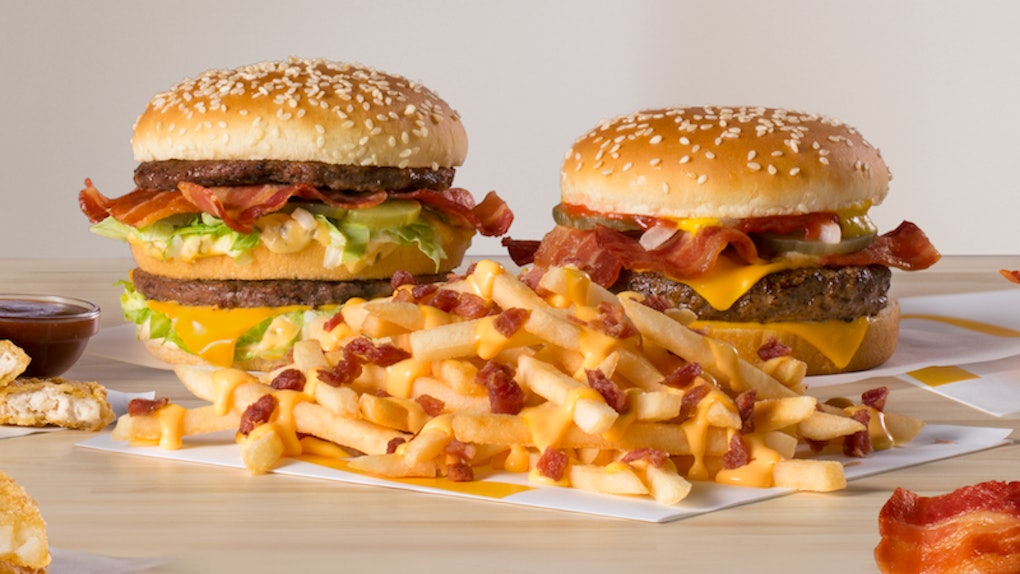 McDonald's' Bacon Hour On Jan. 29 Will Help You Score Your Favorite Side For Free

Whenever I think about happy hour, I think about discounted drinks. However, McDonald's recently scheduled its very own "happy hour" — and boozy beverages aren't on the menu. Instead, bacon is. The special event is called Bacon Hour (rightfully so), and it'll take place at McDonald's locations nationwide at the end of January. Why is that, you ask? Well, McDonald's Bacon Hour on Jan. 29 is coming to help customers celebrate the arrival of bacon on three classic menu items, which include the Big Mac Bacon burger, the Quarter Pounder Bacon burger, and the Cheesy Bacon Fries. If those sound good to you, wait until you find out what else you can order bacon on during the main event.

Spoiler alert: You can add bacon to anything during McDonald's' Bacon Hour. Whether you're hoping to add a side of bacon to your Hot Fudge Sundae or a few slices to your Chicken McNuggets, you're allowed to. (FYI, dipping bacon into ice cream is really freaking good — but I digress). According to a press release from the Golden Arches sent to Elite Daily, those of you hoping to partake in Bacon Hour should visit a participating McDonald's location on Jan. 29 between 4 p.m. and 5 p.m. local time. Then, you can add a side of thick-cut Applewood Smoked Bacon to anything on the menu at no extra charge.

Now, you're probably wondering how much free bacon will be offered during the company's upcoming Bacon Hour. Sadly, you won't be offered boxes and bags of endless bacon (sigh). Instead, every customer will be limited to two half pieces of bacon each when they make a purchase. When you think about it, two pieces of bacon will add the perfect amount of flavor to make your go-to snack even better.

Regardless of how much bacon McDonald's plans on offering come Jan. 29, the entire hour-long event is something that you won't want to miss out on. With that being said, those of you who are stoked for the the big day definitely aren't alone. Chef Michael Haracz, McDonald’s Manager of Culinary Innovation, is just as excited — and he talked about Bacon Hour in a McDonald's press release. Haracz said,

When we said there’s no such thing as too much bacon, we weren’t kidding. January 29, we’ll be upping the bacon ante — the bac-ante, if you will — and celebrating this glorious food favorite like never before. I love bacon. America loves bacon. I really can’t wait to see the crazy and daring combinations our customers put together.

Like I said, I'll probably be dunking bacon into my Hot Fudge Sundae when the big day comes around. It'll be the perfect savory-sweet dessert, and I can't wait.

Bacon Day is right around the corner, so start thinking about which bacon combos you're going to order. And while you're there, don't forget to try the Big Mac Bacon burger, the Quarter Pounder Bacon burger, or the Cheesy Bacon Fries. They'll only be "bacon'ized" for a limited time, so enjoy their savory upgrade while it lasts.

More like this
Here's When McDonald's Caramel Brownie McFlurry Is Coming For A Sweet Spring Treat
By Daffany Chan
Mother's Sparkling Mythical Creature Cookies With Unicorn Shapes Are Majestic AF
By Cianna Garrison
Winc's Summer Water Societé Rosé Subscription Is Back For 2021, So Bring On The Wine
By Cianna Garrison
Stay up to date