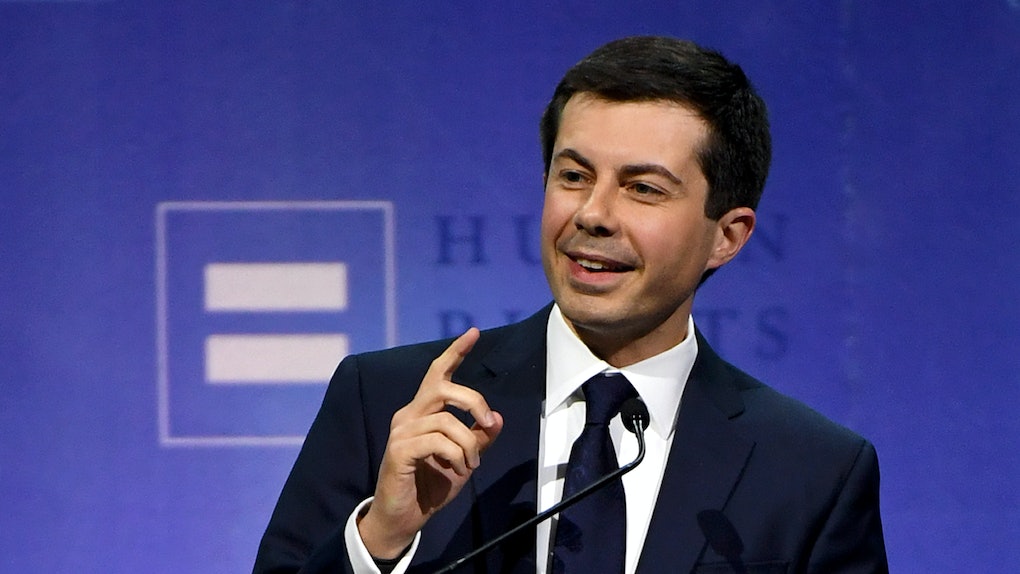 Do you know how to pronounce Pete Buttigieg's name? There's been a cloud of confusion over the proper pronunciation since the South Bend, Indiana mayor grabbed national headlines earlier this year for his 2020 presidential campaign — and he's fully aware of it. While Pete Buttigieg slow jammed the news on Jimmy Fallon, he shared several jokes about his last name that will make you LOL.

Buttigieg dropped by The Tonight Show on Monday, May 13, where he and Fallon joined forces for the segment, "Slow Jam the News," which was made famous by President Barack Obama back in 2016. The Indiana mayor discussed everything from his platform in the 2020 race to his career highlights, but the bit about his last name was arguably the best part.

“Court is in session and the honorable Booty-Judge is presiding,” Fallon said, kicking off the jokes. “All rise, if you haven’t already risen.” The TV host went on call Buttigieg other outrageous names, such as “PB-and-Bae,” while the politician smiled in the background. At one point, the band broke into "Ms. New Booty" by Bubba Sparxxx, remixing the lyrics as "Butti, Butti, Butti, Butti, rockin' everywhere." Flaunting a cheeky smirk, Buttigieg chimed in, "Rockin' everywhere." L-O-L.

Gotta love a person who isn't afraid to show off their funny side, and Buttigieg clearly likes to have fun with his last name. Not only does he have a pronunciation guide on his Twitter page, but he also has gear on his campaign website that breaks down the pronunciation, like shirts reading "BOOT-EDGE-EDGE." His husband, Chasten, has even tried to help the world with the name, tweeting in December 2018 that it can either be pronounced as "Boot-edge-edge," "Buddha-judge," or "Boot-a-judge."

Buttigieg also let his funny side show when talking about President Donald Trump. When asked if he ever thought about asking the president for advice, Buttigieg joked that he has more experience than Trump and Vice President Mike Pence. "So if they ever want advice, I'm sure their interns can show them how to DM me," he cracked.

Buttigieg and Trump sparred on May 10, after the president compared his 2020 rival to Alfred E. Neuman, the gap-toothed, red-headed mascot for Mad Magazine. "Alfred E. Neuman cannot become president of the United States," Trump said in reference to Buttigieg during an interview with Politico. Neuman peaked way before Buttigieg's time, though, so the jab seemingly didn't land as hard as Trump intended it to. In response to the comment, the 37-year-old took a shot at Trump's age, saying to reporters later on May 10, "I’ll be honest. I had to Google that. I guess it’s just a generational thing. I didn’t get the reference."

Fallon made a similar joke during the interview with Buttigieg, comparing him to a character from the '50s show Leave It to Beaver. "Sorry, Jimmy. Must be a generational thing," the mayor said again.

I've gotta say that, as crowded as the 2020 field is, it's nice to see that there's a jokester in the pool.