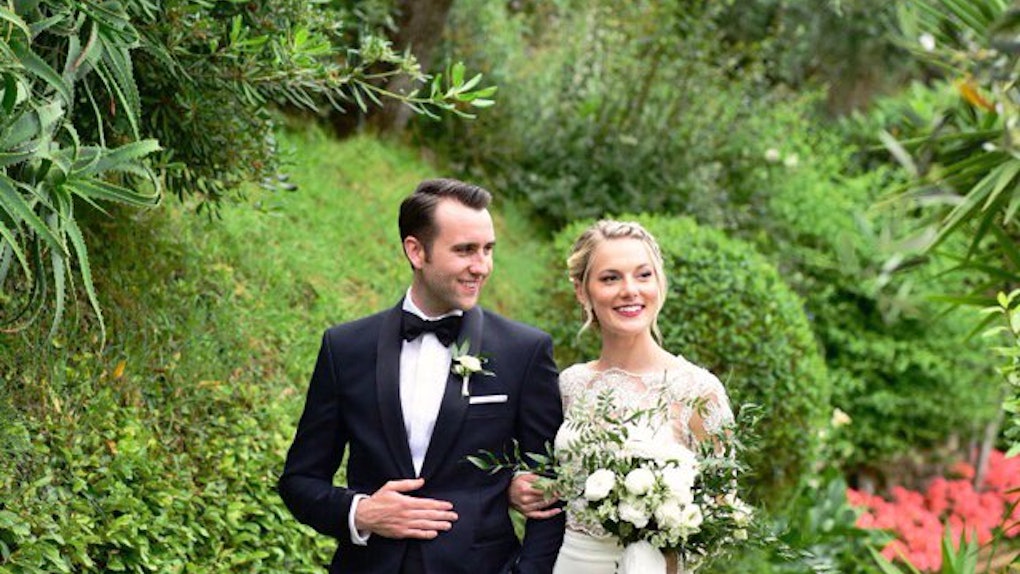 CALLING ALL HARRY POTTER FANS. I come bearing some big news. Neville Longbottom is married! OK, well, I don't know about the character, but the actor who plays him, Matthew Lewis, just tied the knot with his longtime girlfriend, Angela Lewis. The Harry Potter star announced his wedding with a beautiful image on Twitter, and according to a body language expert, Matthew Lewis and Angela Jones’ wedding photo says a lot about their relationship.

Let's backtrack for a second here. Before tying the knot in the secret ceremony, Cosmopolitan Australia reports the two got engaged in Paris in November 2016 after only a few short months of dating. "They're both over the moon," a rep for Lewis said. "They got together in July and hit it off straight away." Now that they've spent almost two years engaged, it's safe to say that they've spent enough time together to know this is the real deal.

Lewis originally posted the picture from their ceremony on Twitter along with this hilarious caption:

Not only did I miss @ArcticMonkeys in LA but they were performing in Italy at the same time we were there and my wife made me get married instead. Fuming.

Um, who knew Neville Longbottom was such a jokester?! And apparently such a diehard Arctic Monkeys fan!?

I asked body language expert Tonya Reiman, author of The Power of Body Language, to analyze this adorable image for clues about their relationship. And boy, oh, boy, did she have a lot to say.

First, Reiman would like to direct our attention to where Lewis has his hands placed. "Typically, when a man is covering his solar plexus area [the stomach], it is a protection gesture which demonstrates he might be slightly uncomfortable or nervous," she explains. "His left hand is in his pocket. Typically, this is indicative of someone who is being secretive and comes across negatively, especially as it is the hand closest to his new bride." Oof. Well, that's not a great sign. But Reiman notes that "this could also be a pose the photographer requested as hand in pocket is normal for photographers."

Despite the negative signs she drew from his hand placement, Reiman explains that the couple is still very much in sync. "They are walking in tandem, both have their right knee bent and are taking small steps," she mentions.

"Her right arm is linked with his left arm in a gentle hold with her middle and ring finger grasping tighter," she continues. "When we see this kind of pose it usually demonstrates a woman who wants to be seen as free and easy, but at the moment, needs to hold on tighter."

While it's common to interpret two people looking in the same direction as being in sync, Remain isn't concerned about the fact that Lewis and Jones are looking in two separate directions. "He is looking to her and she is looking off somewhere – once again, this is typically a photographers pose – the bride is looking at the beauty and her new husband is looking at his new 'beauty.'" Like before, this aspect of the photo might have been posed, so isn't a truly candid photo that would reveal the couple's most intimate feelings toward each other.

Reiman concludes that their raised cheeks and deeper nasiolabial folds (the lines by your mouth when you smile) indicate that "they are both smiling what looks to be happy smiles." And that's beautiful news.

Cheers to Neville Longbottom — er, Matthew Lewis and Angela Jones! I hope that they spend the rest of their lives smiling genuinely happy smiles.

More like this
Zac Clark & Tayshia Adams Are Wedding Planning & I’m So Pumped
By Lydia Wang
When Are Ariana Grande & Dalton Gomez Getting Married? Here's The Reported Tea
By Corinne Sullivan
Clare Crawley Clapped Back At A Troll Who Said Dale Moss Should Dump Her
By Candice Jalili
Stay up to date