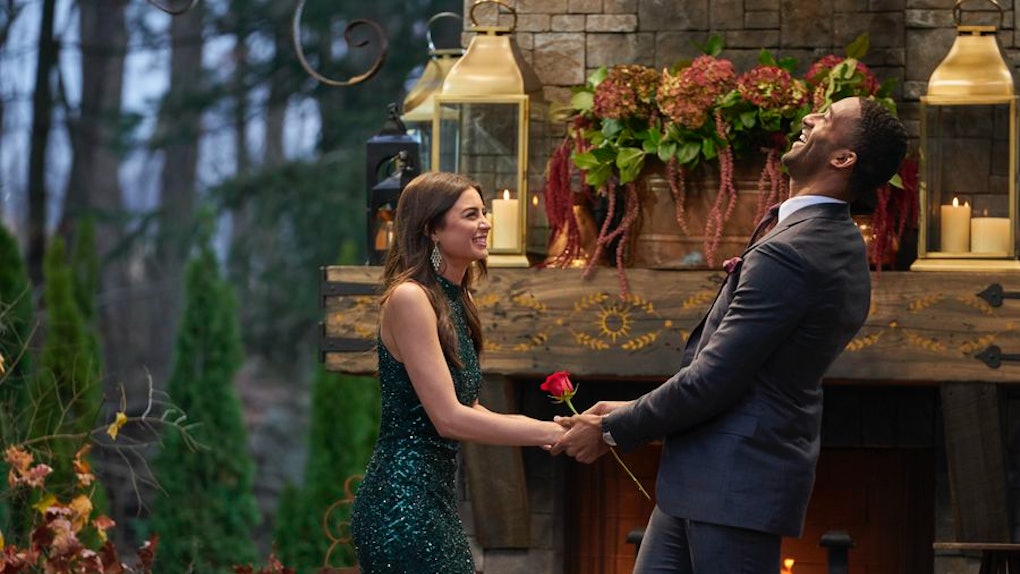 Matt James' intense season of The Bachelor has officially come to an end, and fans finally got the much-needed answers they were waiting for. While Season 25 was filled with plenty of onscreen drama between contestants, there was also a serious offscreen reckoning about Bachelor Nation's handling of racism when frontrunner Rachael Kirkconnell's racist past was brought to light. Since she ultimately ended up in the top two, fans were on edge over Matt James and Rachael Kirkconnell's Bachelor finale ending. Well, it was certainly unconventional.

From the beginning of the season, Rachael was one to watch. She quickly caught Matt's eye, and by Episode 5, the pair admitted to each other they were falling in love. There's no denying Matt formed a deeper connection with her than almost any of the other women. So when it came time for him to give out his final rose, he (*drumroll please*) decided to give it to Rachael. However, even though they ended the season as a couple, they did not get engaged at the end of the March 15 finale.

As is customary, Matt's final two met his family during the final episode — in this case, Matt's mom, Patty, and his brother, John. Rachael's conversation with Patty was an emotional one where she admitted that on the first night of the process, when Matt prayed over the women, she knew she was going to fall for him. "I truly felt it in my soul that this is where I was supposed to be," Rachael said. "I really thought I was supposed to be here for Matt and this was God’s way of putting us together."

Patty and John had nothing but nice things to say about Rachael, but ultimately, Patty's conversation with Matt made him think twice about whether or not he was ready to propose. "[Love] makes life wonderful," Patty said. "But people fall in and out of love, and love is not the end-all, be-all." Matt took his mom's words to heart, deciding instead to ask Rachael to go steady with him during the final rose ceremony instead of getting down on one knee.

"When I think about the life I want to live, I think about living that life with you," Matt told Rachael during the final rose ceremony. "And I want to leave here with you, and I want to commit to you and to every day building on what we started here," he continued. "I just want to make sure my love is enough for you."

The two ended taping with a kiss and a toast, but it wasn't all smooth sailing in the months that followed. Serious allegations about Rachael's past began circulating on TikTok shortly after The Bachelor began airing in January, and on Feb. 5, pictures of Rachael at a 2018 plantation-themed fraternity formal surfaced. She released a statement apologizing for her actions on Feb. 11, and on Feb. 22, Matt released his own statement calling the party photos "incredibly disappointing."

This all took a toll on their relationship, and during "After The Final Rose," Matt told host Emmanuel Acho that he and Rachael broke up due to their differences. "When [Rachael] spoke out and publicly acknowledged that she would do better and she apologized is when I was finally able to take a check on myself and see where I was at," said Matt. "And I wasn't OK. Because it was in that moment in the conversation that I had that Rachael might not understand what it means to be Black in America."

Rachael said she was "confused" and "very blindsided" when Matt called to break up with her, but "once that initial reaction went away, I thought about how strong I thought our relationship was. So for him to end things, he must have been very, very hurt by everything," she said. "It was hard because I lost the love of my life, but in the process of that, I hurt him while doing so.”

During their final conversation on "After The Final Rose," Matt admitted that his feelings for Rachael wouldn't go away overnight, but that ultimately, he knew he needed to take a step back and let Rachael do the work she needed to do to better herself. "That's something you gotta do on your own," he said, "and that's why we can't be in a relationship."