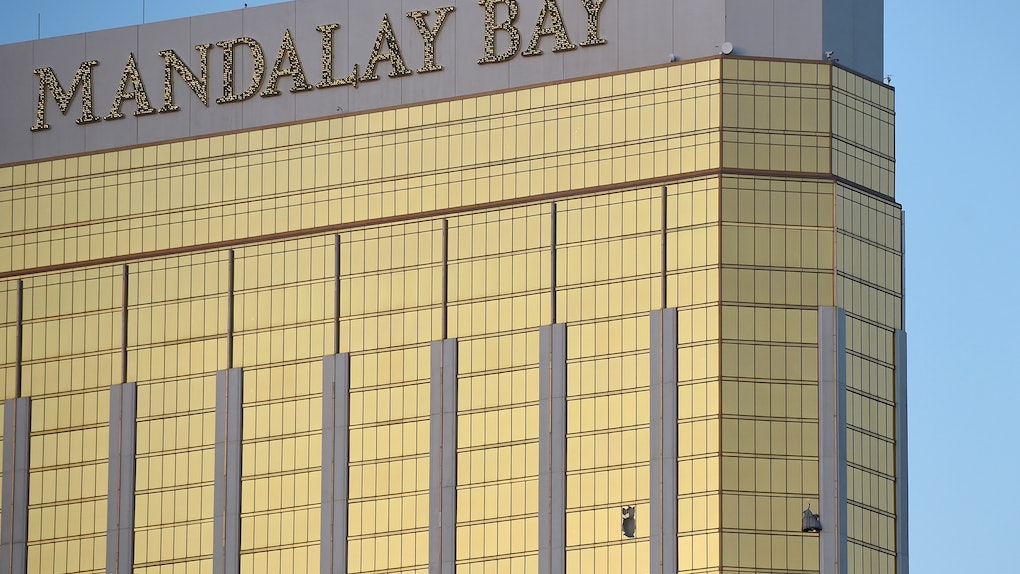 Brace yourselves, everyone. I have some really disappointing and all-around mind-blowing news for you guys. Mandalay Bay Hotel is suing Las Vegas shooting victims, and it really might sour your mood. Apparently, MGM Resorts International, the owner of the hotel, is doing so in attempts to avoid any liability claims from the massacre.

According to Newsweek, MGM has filed a lawsuit against more than 1,000 victims of the Las Vegas shooting — which occurred in October 2017 during the Route 91 Harvest country music festival, and left 58 people dead and more than 850 injured. The company filed lawsuits against the victims in Nevada and California, arguing it could not be held liable for any deaths or injuries related to the massacre because it took steps to ensure such a tragedy did not occur. The hotel chain points out that it had hired a company that was certified by the U.S. Department of Homeland Security to provide security at the concert to "help prevent and respond to mass violence" and, therefore, feels it is not liable for the atrocity. Additionally, as noted by the Chicago Tribune, the company says that a 2002 federal statute eliminates liability for any company that implements "anti-terrorism technology," which it claims it did.

However, the hotel chain's lawsuit isn't seeking compensation. Instead, it appears to be a bid to avoid being held liable for any deaths, injuries, and damages related to the shooting. A spokesperson for MGM, Debra DeShong, shared a statement about the litigation with 8 News Now on July 16, saying the company was sympathetic to the victims. She explained,

From the day of this tragedy, we have focused on the recovery of those impacted by the despicable act of one evil individual. While we expected the litigation that followed, we also feel strongly that victims and the community should be able to recover and find resolution in a timely manner. ... Years of drawn out litigation and hearings are not in the best interest of victims, the community and those still healing.

Hundreds of victims have filed lawsuits against MGM in the wake of the violent Oct. 1, 2017 shooting — which began when the shooter broke the windows out of his 32-floor suite at the Mandalay, and unleashed a flurry of bullets on the 22,000 festival goers in the crowd below for 10 minutes. The victims included a U.S. Navy sailor, a firefighter and an off-duty police officer. In the days after the massacre, photos of the event swept the nation, painting a gruesome picture of the terror and trauma the victims experienced during the festival.

But a lawyer for some of the victims told the Las Vegas Review-Journal the grounds of the hotel chain's lawsuit are "outrageous" and "quite frankly [verge] on unethical."

“I’ve never seen a more outrageous thing, where they sue the victims in an effort to find a judge they like,” attorney Robert Eglet explained to the outlet, accusing MGM of “judge-shopping” by filing the lawsuit in federal court instead of a state court, where he believes any lawsuits should be filed, especially because MGM is a Nevada-based company. “It’s just really sad that they would stoop to this level.”

“The Federal Court is an appropriate venue for these cases and provides those affected with the opportunity for a timely resolution," DeShong said in her statement.

Although it's been nearly a year since the tragedy, these victims will always be left with its painful memories. Unfortunately, this lawsuit just seems like another reminder of their worst day.