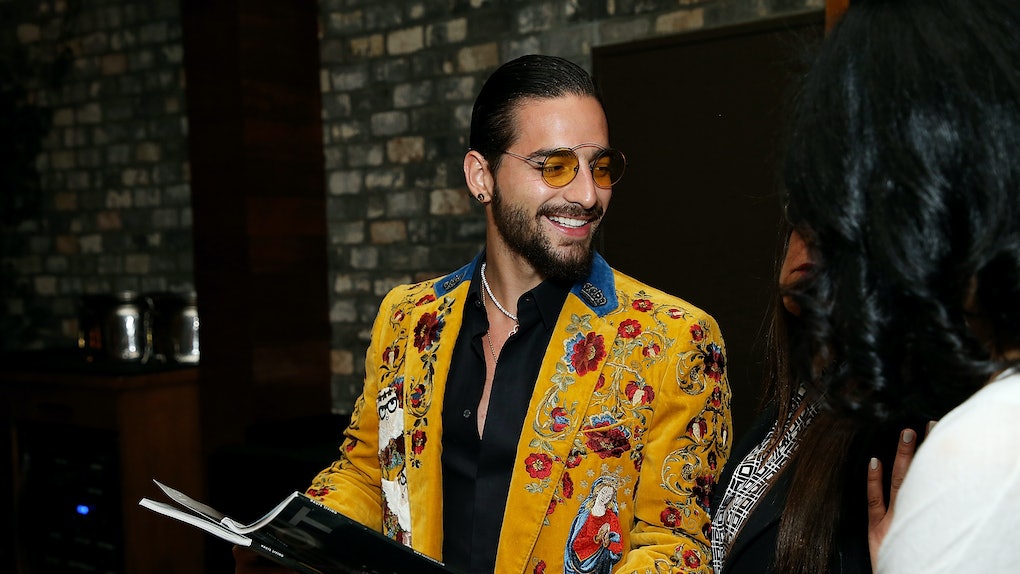 You can learn a lot about a person by looking at their dating history. You can learn about their taste in partners, what they're drawn to, and from Maluma's dating history, you can learn he has a pretty definite type: musician and/or model. Of the three women the 24-year-old Colombian singer has been reportedly romantically connected to, two are singers, and his current girlfriend is a DJ and a model.

While some stars and public figures are all for broadcasting every single one of their relationships for the world to see (thanks for that, guys), Maluma seems to be the exact opposite. Of his three past rumored and confirmed relationships, the one he's been the most vocal about on his social media and in interviews is his current squeeze, Natalia Barulich. But before their relationship, he didn't say much about the rumors surrounding his love life. Honestly, I respect it, despite wanting to know every little thing about my favorite celebrities' lives. (IDK why I'm like this, OK?!)

No matter how many fans ask questions (hi, me), celebs deserve to have their own lives outside of the spotlight. But that doesn't mean we can't wonder who else has been a part of this pretty boy, dirty boy's dating life.

In 2015, rumors began that Maluma and Spanish-Mexican singer Belinda were dating after meeting on the set of La Voz Kids Colombia began to circulate, Latin Times reported. The two were allegedly seen together several times that year, but neither confirmed the relationship. Maluma actually denied the relationship in an interview with Variety Latino. "Belinda, I say it openly, we're not dating, but she's one of the most beautiful women I've ever seen," he told the publication.

A few months later, he said in an interview on Telemundo's Suelta La Sopa that he thought the media scared Belinda away. So, whether or not they actually dated, or if Maluma thought they had a chance had it not been for the media, is a little bit unclear.

In 2017, after Belinda and Criss Angel broke up, Maluma replied to her breakup announcement on Twitter saying, "How's life Beli? You look very pretty like always. Kiss and hug, you are very much loved my queen! @belindapop," he wrote in Spanish. So, whether they dated or not, it seems like the two ended up on good terms.

In May 2017, Maluma and Anitta were rumored to be dating, Hollywood Life reported. The two singers were performing their hit song "Sim Ou Não" and ended their performance with a kiss, which got the mill turning about how they may be an item. Anitta was also supposedly dating Tyga at the time she and Maluma locked lips. Neither Maluma nor Anitta spoke about the kiss or any relationship, so it's possible the kiss was a one-time, in-the-heat-of-the-moment thing.

Which brings us to Maluma's current flame, DJ/model Natalia Barulich. The couple met on the set of Maluma's music video for his hit song "Felices los 4," which was released in 2017. In an interview with Hola! in August 2018, he said, "It was love at first sight. She went on with her life, and I went on with mine, but shortly after we started dating." Maluma and Barulich may have begun dating shortly after filming, but they kept their relationship pretty private until late 2017.

Their fans really got a look at their relationship last year, when the the stunning couple began broadcasting their relationship on their respective social media platforms. Maluma also spoke about Natalia in interviews with Hola! and Telemundo's Al Rojo Vivo. (And OMG, he said the cutest things!) The couple co-parent an adorable Pomeranian named Julieta (who has more Instagram followers than all my friends combined), and they have matching infinity sign tattoos. From what it seems, Maluma and Barulich have a really good thing going. Here's hoping that's not going to change any time soon, or ever.