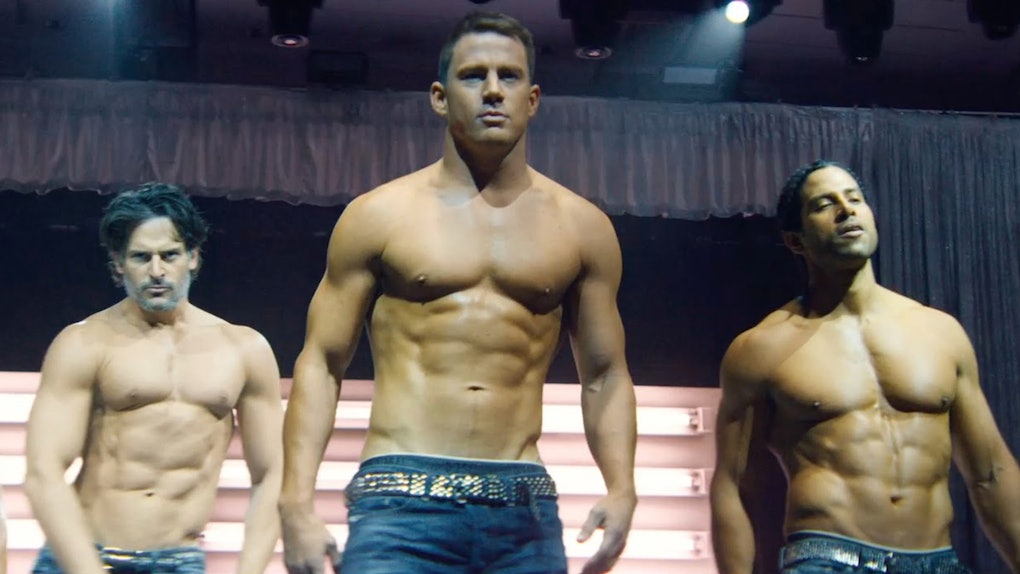 'Magic Mike' Is Leaving Netflix In October, So Watch Channing Tatum While You Can

Once upon a time in 2012, the world was graced with one of the greatest gifts imaginable: a movie about male strippers starring Channing Tatum. Whether you saw Magic Mike in theaters and felt some kinda way as you munched on your Milk Duds, or you didn't fully appreciate the flick until years later, it doesn't matter. The film is straight up art. And while the movie deserves to be preserved in a time capsule so future Martians can watch it, there's a snag: Magic Mike is leaving Netflix in October, so it's time to sear the sexiness into your memory for good.

When the movie was first released, fans were lowkey shocked. (The eroticism! The choreography! The abs!) After everyone's pulse returned to a normal pace, it was clear the the film was not only scorchingly hot, but it also had a pretty interesting storyline as well.

In case you need a refresher (or you were too distracted by the dance moves to follow the plot), the movie is about Mike (Tatum), a male stripper who takes newbie Adam (Alex Pettyfer) under his wing to teach him the ins and outs of stripping. Tatum is the star performer at Xquisite Strip Club, a fictional Tampa-based club owned by Dallas (Matthew McConaughey). Naturally, there's sex, drugs, and drama, but the biggest draw is the dance numbers and Tatum's impressive moves.

The real kicker is that not only is Tatum actually performing all the moves and stunts, but the film is actually based on his own life. Before becoming one of the most beloved celebs in Hollywood, Tatum worked as a stripper in Tampa, just like his character in the film.

Between Tatum's hotness, astounding stage presence, and fascinating backstory, it makes sense the movie would be a big success and merit not only a sequel (Magic Mike XXL), but also a live show in Las Vegas as well. Though the film is leaving Netflix on Oct. 31 (talk about scary), you'll still be able to rent it on Amazon Prime if you suddenly have a hankering for watching dudes get down on a dance floor (you can also rent the sequel there too).

You have until Halloween to watch Tatum grind, so get your fill before Magic Mike leaves Netflix for good.

More like this
'He's All That': Premiere Date, Cast, Trailer, Filming News, & More
By Dylan Kickham
Is Netflix Making A 'To All The Boys' Spinoff Series About Kitty? Here's The Tea
By Rachel Varina
What Are The Eldritch Terrors In 'Chilling Adventures Of Sabrina'? They're No Joke
By Dylan Kickham
Stay up to date