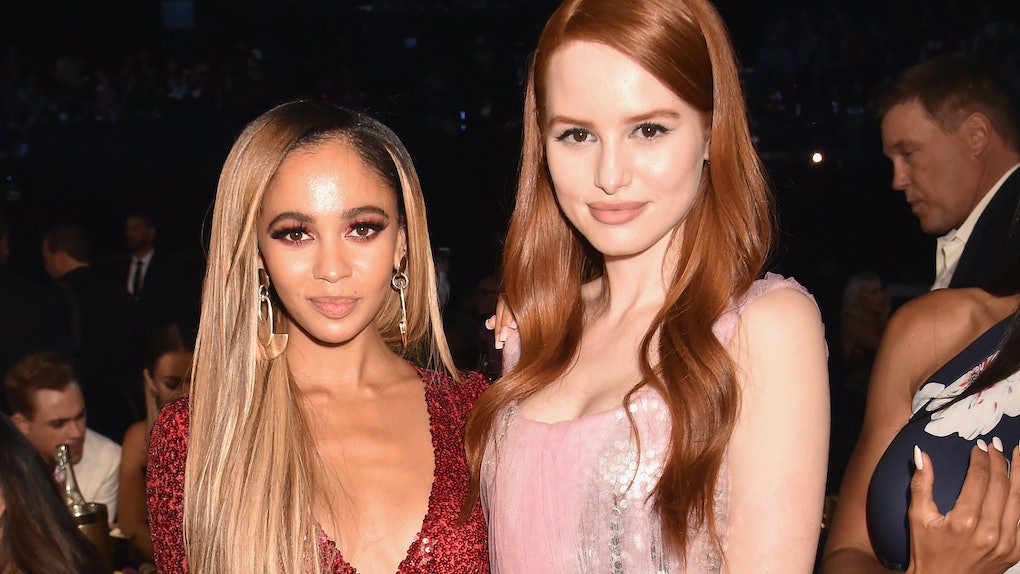 Through hard times, Madelaine Petsch has Vanessa Morgan's back. On July 27, just days after Morgan announced she was pregnant with her first child, news broke Morgan's husband Michael Kopech had filed for divorce. But, for some reason, Morgan has been getting the brunt of fan questions and criticism. It's a sticky situation all around, seeing as Morgan just got married five months prior, but Petsch is defending her Riverdale co-star from trolls. Madelaine Petsch's response to haters mocking Vanessa Morgan was friendship goals.

News of Morgan's divorce comes just after she announced her pregnancy on July 24, leaving fans confused as to what happened between her and Kopech. Apparently, her husband filed for divorce in his home state of Texas on June 19, about one month earlier. Morgan and Kopech's teams did not respond to Elite Daily's previous request for comment on the pregnancy and divorce.

People have now flooded Morgan's Instagram with messages, some supportive, and many not-so-positive. Petsch was fuming after seeing some of the critical messages about her friend. There was one comment that set the star off more than the rest, though.

Kopech is a professional baseball player for the Chicago White Sox, and one fan dropped a comment that read, "Don't disrespect our pitcher like that." This didn't sit right with Petsch, who immediately clapped back.

"Honestly if I see one more comment like this I’ll lose it," she said. "Vanessa is a beautiful mother to be and the hate and disrespect I’m seeing on this post about her bringing a new life into this world is disgusting."

It looks like Morgan isn't letting anything dull her shine right now. She was glowing in her first pregnancy post, and shared the sweetest message about her excitement.

"I am overjoyed to be welcoming my baby boy into the world this January," she shared with fans. "This little guy has already brought me so much happiness and a feeling of such a greater purpose. I cannot wait to meet you!! On a personal note, I have had the blessing of growing up in the public eye having started my acting career at age 6. While this has been incredible for me, I am very much looking forward to giving this little guy some room to grow up outside of the public eye, until he tells me otherwise."

While Morgan hasn't shared her due date just yet, Petsch will undoubtedly be supporting her friend when that day rolls around too. These girls' connection is real on-screen and off!

More like this
Billie Eilish's Response To Critics Of Her Sexy 'British Vogue' Cover Was On Point
By Michele Mendez
These Tweets About Beyoncé On Netflix's 'Selena: The Series' Are Too Much
By Dylan Kickham
Jamie Lynn Spears' Promotion For 'Sweet Magnolias' Season 2 Means More Noreen
By Dylan Kickham
Stay up to date