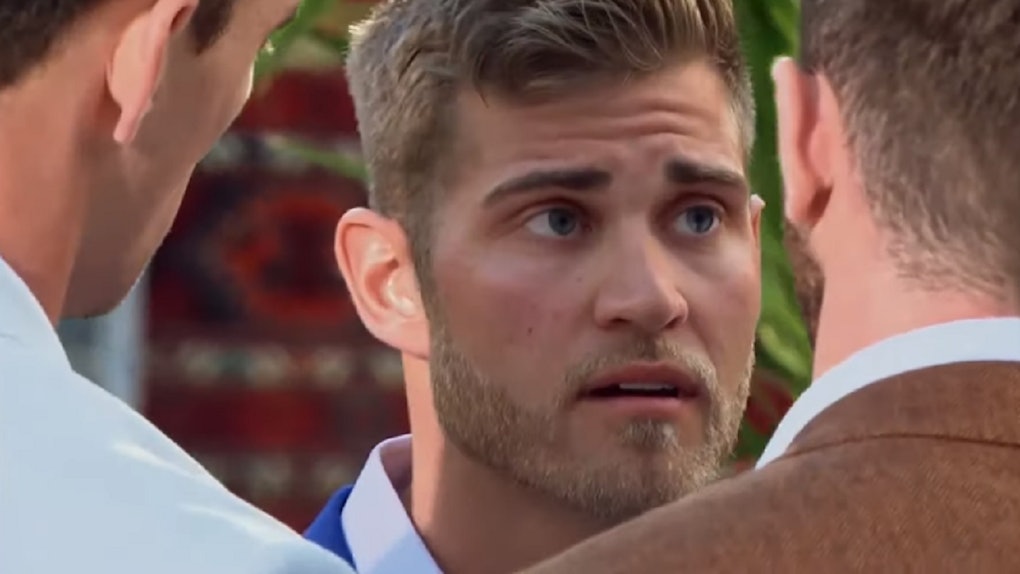 When Hannah Brown finally sent Luke home on The Bachelorette, contestants applauded her quick shutdown of Luke's attempts to shame her about having sex in the fantasy suite. But as the teaser for July 22's episode promised, Luke wasn't ready to accept Hannah's fiery goodbye and was slated to crash the rose ceremony that week. That promo proved true as Luke's return to The Bachelorette after being eliminated was super intense.

In case you missed it, the show's previous tease of Luke and Hannah's explosive fight about sex also panned out as expected when Luke asked Hannah if she agreed with him about the marriage bed being "kept pure" and avoiding sex until marriage. Luke was concerned about the Bachelor pattern of people claiming to be religious and still pursuing sex in the fantasy suite, telling Hannah, "If you told me you have had sex with one or multiple of these guys, I'd be wanting to go home."

Irked by his wording and tendency to call her having sex a "slip-up," Hannah finally caught on to Luke's possessive, manipulative nature that other contestants had warned her about. "I've finally gotten clarity on you and I do not want you to be my husband," she told him. Feeling like she had "bent over backwards" for their relationship, she refused to let him further explain himself. In addition to revealing her experience of windmill sex before he left, she sent Luke packing with the epic final words: "I have had sex, and honestly, Jesus still loves me."

Bachelor Nation's delight in the elimination soured when preview footage promised Luke's return the following week. The full surprise comeback began in July 22's episode as Jed, Peter, and Tyler arrived at the rose ceremony in Greece. While they were still out of the loop about Luke being sent home, Hannah expressed joy to cameras that he was gone.

Her glee played alongside shaky cell phone footage of Luke in a car telling the camera, "Hannah thought there's no way I'd want to be with her anymore after the last thing she told me, and she's sadly mistaken ... I still love her and this isn't over yet ... She's never told me that she loves me, but she loves me. She doesn't know it yet, but I'm on my way, and I'm coming."

With an engagement ring in pocket, Luke arrived at the rose ceremony and approached Hannah to "talk," but since the other guys didn't know he was eliminated early, they didn't react (it's not the first time he's gone off-script, after all). Hannah refused, trying to step away from him and tell him to go. "I'm about to go psycho," she warned, "so please leave."

While Luke refused to leave, demanding "clarity" about her feelings, Hannah said he had to leave because she already sent him home. "I'm not doing this anymore," she said. "I'm not gonna let you rewrite what you said the other night."

"This is not about your heart," she continued. "I'm sorry your heart is broken, but you've already broken my heart like 15 times through this."

Hannah even carried the rose stand away from him, but Luke persisted. The other men then stepped in, staring him down and asking why he wouldn't go. "Why are you doing this?" Hannah asked him. "I don't understand why you need closure because I have given you so many opportunities."

With Chris Harrison on the scene, Hannah then spilled the tea to the group and explained what Luke had said the previous night. Luke's rebuttal wasn't too strong, as he said, "I still know you still have feelings for me ... Never have I ever condemned you or judged you. So please don't put those words in my mouth."

"I have been very clear about every decision I've made thus far, and I was very clear the other night," Hannah finally told Harrison about Luke. "I don't want him to be here."

Hannah then looked Luke straight in the eye and confirmed she no longer had feelings for him. That was the nail in Luke's coffin, and as he walked off into the land of scandalized Bachelor alums, Harrison told Hannah about Luke's engagement ring. She could only angrily sputter in response, but girl, same. What a way to end the journey, huh?