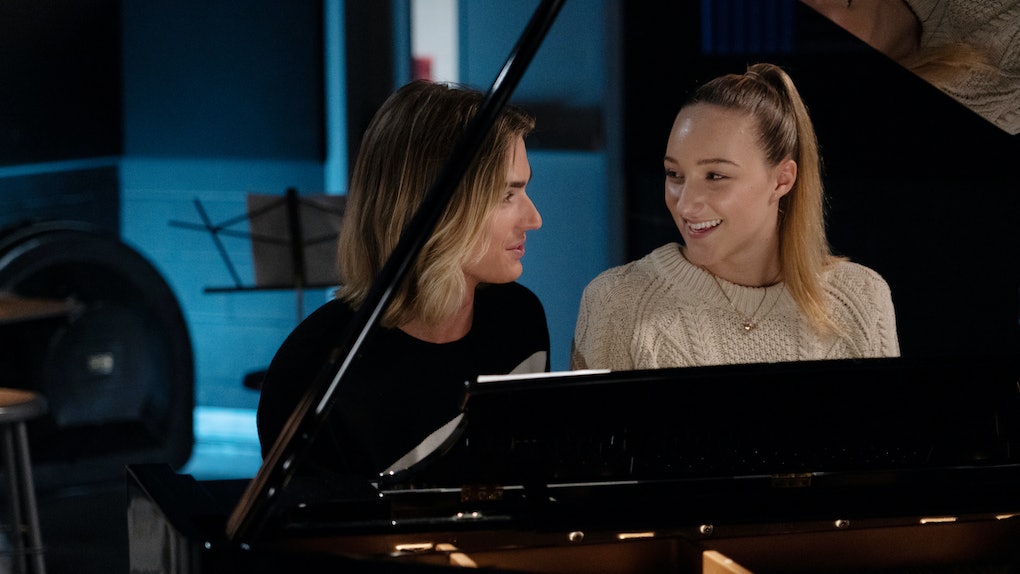 It may be tricky to step into the shoes of a teen rom-com's "cool guy" character, but for Luke Eisner, his role as dreamy foreign exchange student Stig in the Netflix original movie Tall Girl was a chance for him to share messages he believes in. While his onscreen counterpart gets a lesson or two to learn about bullying and peer pressure, Luke Eisner hopes Netflix's Tall Girl will help viewers tune out the negativity and gain confidence in themselves.

Tall Girl, which hit Netflix on Sept. 13, centers around a 6-foot-1 high school student Jodi (Ava Michelle) and her insecurity about her height. She spends about half her time fending off her peers who ridicule her for her physical differences, and the other half dreaming of getting a boyfriend who is taller than her. Enter Stig (Eisner), a new foreign exchange student whose good looks and affable personality make him a hot commodity around school. However, what his peers don't know is that, back home in Sweden, Stig wasn't regarded as handsome or cool, and he struggled with the resulting confidence issues in his own way.

In an interview with Elite Daily, Eisner speaks with the same bubbly enthusiasm as Stig, and while he's actually from the Midwest, he can relate to his character's struggles in Sweden. "I personally was bullied in high school," he says, referencing his tall and thin stature that today has helped him build his modeling and acting career. "I think now that I’m out of high school and out of that bubble, I think, like, 'Oh my gosh, I wish I could go back and tell myself that, like, everything ends up all right' ... The things that you’re made fun of for end up being what makes you stand out."

As many teens are susceptible to do, in the movie, Stig turned to the gratification of being accepted by the "popular" crowd and ended up hurting Jodi in the process. Eisner says he again tapped into his own teenage experiences to understand Stig's thought process behind that decision.

"I was always in bands and I remember thinking, like, 'Oh, we should just write the songs that people want to hear,' or 'I should wear something that that girl might like,'" he says about high school. "I lost who I was very quickly that way."

However, Eisner eventually learned from these experiences. "I think, at the end of the day, you end up making the right friends and you end up with the right girl once you stick to what’s true for you," he says. "Because why be with someone romantically or as friends if they like a facade of something else that you’ve put on?"

Teen movies about learning to love yourself are plentiful, but Tall Girl's approach to Stig reminds viewers that the mantra of not judging a book by its cover applies to everyone, regardless of their clique. In addition to wanting viewers to think about confidence in themselves, he hopes the movie inspires people to be more open to others, a lesson his character definitely learned the hard way.

"Stop worrying about the verticalness of someone; worry about the horizontal, the depth of the person inside," Eisner says. "Be confident in who you love and who you like because of who they are. Sometimes that might not feel like the cool thing to do but it’s definitely going to end up [with] more happiness."

Eisner, who today is a successful model, actor, and member of the band VOILÀ, also shares a message to those who may be dealing with confidence issues of their own. "I don’t think it gets better; I think you get better," he explains. I think you yourself start to look at those things and go, 'You know, I can dwell on that and I can try to change something that never will, but the world will just keep spinning, so I’m gonna change my own world and how I see it.' And I think that’s really fun."

More like this
Kathryn Hahn Hopes To Explore Agatha's Backstory In Future Marvel Projects — EXCLUSIVE
By Dylan Kickham
'Shiva Baby' Director Emma Seligman Is Making Films For Her Generation — EXCLUSIVE
By Abby Monteil
Is Netflix Making A 'To All The Boys' Spinoff Series About Kitty? Here's The Tea
By Rachel Varina
Stay up to date