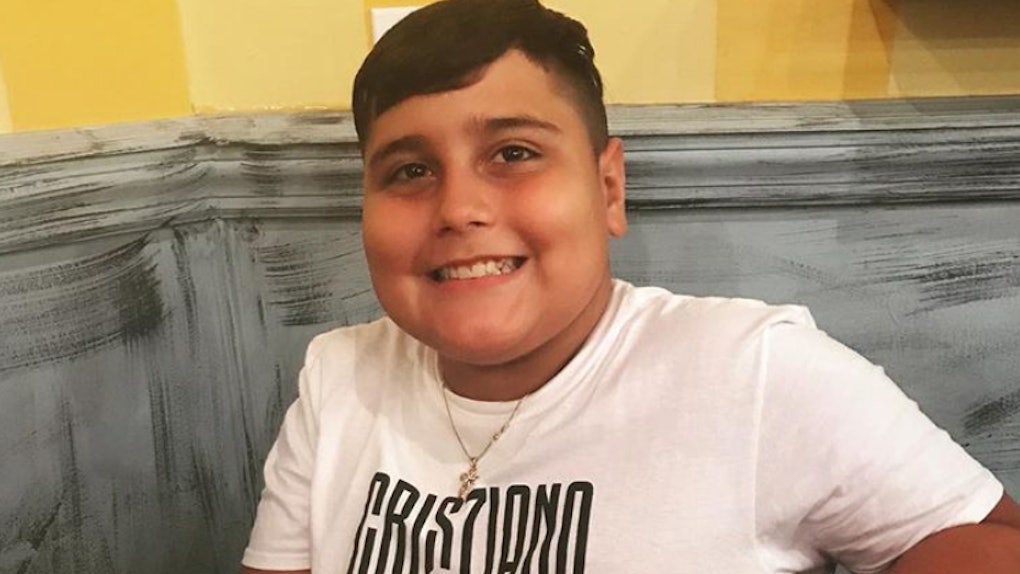 When I was 11 years old, I didn't do much but go to school, hang out with my mom, and watch a bunch of PBS — you know, typical kid stuff. Luca Marconi, aka @LucaTwoTimes, is anything but a typical tween. At age 11, the Brooklyn foodie already has over 27,000 followers on Instagram, he's been featured on network television shows, and he even gets stopped in public for photos. So, what does this 11-year-old do that makes him so popular among the masses? Luca Marconi is an Instagram food reviewer, and he might run one of the most fun and lively foodie accounts around.

When you picture a food reviewer, what comes to mind? You might think of an older individual with a refined palette using phrases like "fine dining" and "tasting notes." Well, Marconi doesn't fit those stereotypes; in fact, he turns them on their head. If you haven't seen Marconi's food reviews before, you're in for a major treat. Marconi posted his first food review video around two years ago, when he was 9 years old — and he hasn't stopped since. Marconi notes he was surprised when his food reviews began resonating with so many people, sharing, "I really didn’t expect that to happen." Why? Well, like any kid, he was really just doing it "to mess around."

It really started when someone filmed me one day, around two years ago.

Regardless of his expectations, Marconi's videos went viral. He posted his first food review video in June 2017. In it, he reviewed a meat-filled calzone from Carmine and Sons Pizzeria & Sports Bar in Brooklyn. Marconi makes the video all about the food food, saying, "Let's see what we have here. We have some mozzarella; we have some Italian sausage; we have some pepperoni; we have the beautiful sauce on the side. This is made with a lot of love and heart." Marconi gave the "beautiful masterpiece" two thumbs up, and the video generated over 14,000 views. Marconi says he knew he was on to something, because the numbers were adding up. "It got a lot of views, so I got a lot of followers," he explains.

Despite his popularity, Marconi didn't really start the account to become a food reviewer. Before he posted his first video, Marconi says his account was filled with regular photos of his life and maybe some pasta dishes here and there, because he loves food. With no thoughts of becoming viral, Marconi's beginnings have a simple start. "It really started when someone filmed me one day, around two years ago."

Marconi reviews everything from pizza to pasta dishes to sandwiches with a level of gusto and enthusiasm that's also reflected in his Instagram bio: "You got to be dedicated to the grind."

Most of his food reviews take place in accessible neighborhood spots that are family-friendly and not too hard on your wallet, because he wants to "give local businesses publicity." Marconi posts his assessments to Instagram in unscripted and improvised videos that feature him eating and talking about the food. Though his food review videos on Instagram are super entertaining and fun, Marconi says it doesn't take him too long to craft a post. The 11-year-old's creative process consists of taking a few minutes to record a video and a few minutes to write a caption before he posts it. No script-writing, no editing, just record and post. His advice for other people who want to go viral? "Stick to what you love doing, and do it crazier." Marconi sticks to his own advice, too, because his rating system has evolved from one to two thumbs up to a scale of 100 to 1,000 thumbs up for a tasty meal.

It didn't take long to Marconi to realize he'd gone viral, because he says it happened with his first video posted in June 2017, "when people started liking it." "That's when people started to know me ... I knew right away that [I] would keep doing this."

Nice and noisy, [that's] my type of restaurant.

So, what does a food reviewer like to eat when he's not reviewing food? Marconi's favorite food is currently ravioli, and his favorite restaurant is a neighborhood spot called Patrizia's of Williamsburg. When describing why he loves Patrizia's, Luca says, "It’s really a great [atmosphere]. They have a beautiful restaurant, it’s always nice and noisy, [that's] my type of restaurant, you know? And it’s an Italian restaurant." Though he's tried a lot of different kinds of dishes, Marconi says that if he had to pick something to try next that he hasn't tried yet, it would be crickets. That's way more adventurous than I was at 11, that's for sure.

Marconi's fame isn't limited to the digital space. He's been featured on several television shows, like his March 2019 Wendy Williams Show appearance, where he reviewed sandwiches, salad, pasta, and grilled cheese with his regular charm and expertise. In a slight change of pace, Wendy Williams also had Marconi try caviar, and his reaction was just two simple words: "too salty." Marconi posted an Instagram video of him trying the caviar on her show and captioned it, "Just because it’s expensive doesn’t mean it tastes fire." Even though fame wasn't the initial goal of his account, Marconi says he loves being on TV and enjoys every minute of it.

I feel like school’s my job, and ... my food review [channel] is a place to escape school and have fun.

Despite Marconi's thousands of followers, his TV show appearances, and all the articles about his food reviews, Marconi says his life has pretty much stayed the same. His friends treat him the same as they used to and he feels like he hasn't changed much himself. He still doesn't view social media as a job, even though he responds to Instagram comments from fans, and he's got more fans now expecting food reviews than ever before. He says, "I feel like school’s my job, and ... my food review [channel] is a place to escape school and have fun."

Despite Marconi's food-centric life and Instagram account, he says he wants to go in a slightly different direction career-wise when he grows up. Though he sees food reviews occupying some part of his future, Marconi says he wants to be a lawyer when he grows up. Why? He believes "it’s just nice to give back to my community and it's just really... it’s just nice in general to be a lawyer." He adds that he would make a good lawyer for one very specific reason: "I have a loud mouth, and you need a loud mouth to be a lawyer."

So, what's next for this vibrant pre-teen? Marconi intends to start a YouTube channel called "The Life Of A Food Reviewer," showcasing his day-to-day happenings, from going to school, to his after-school life, to, of course, what he eats. Marconi's manager, Sabino Curcio, who knows Luca through Marconi's uncle, says there are some big networks currently interested in working with Marconi, including one that wants to do a 10-episode digital series with him. So, expect to see a lot more of this larger-than-life food reviewer beyond your Instagram feed in the coming months.