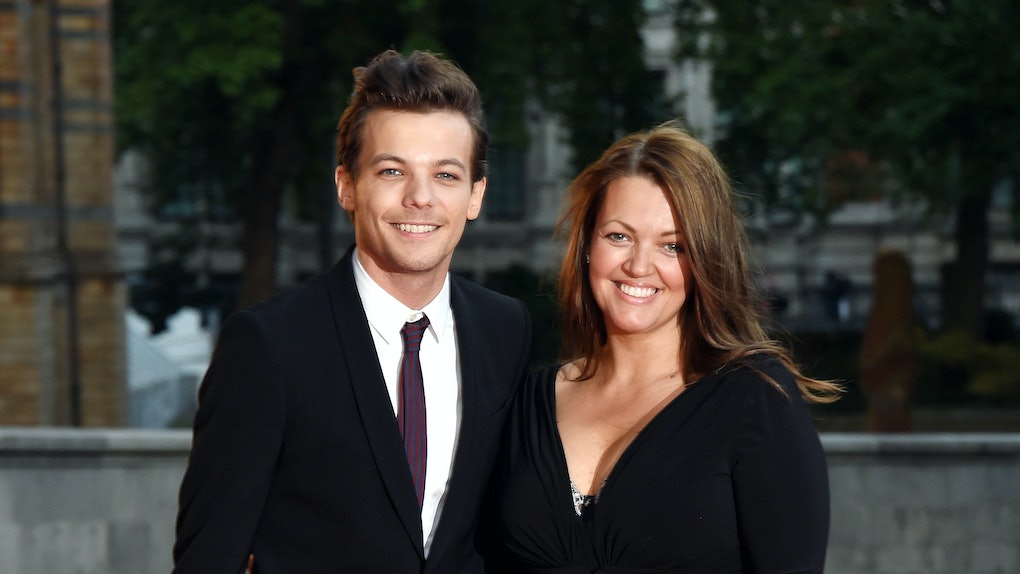 Hey, are you in the mood to feel emotional today? If so, you're in luck, because former One Direction star Louis Tomlinson has some new music, and it will make your heart burst with emotion. Louis Tomlinson's "Two of Us" lyrics are all about honoring his late mother, and while they are certainly gut-wrenching, the overall message is so, so beautiful.

It was reported back on Wednesday, Dec. 7, that Johannah Deakin, the mother of Louis Tomlinson, died from leukemia at age 43. This emotional moment in Tomlinson's life led to the creation of his new song, "Two of Us," which was debuted on Thursday, March 7.

"I’m not at the stage in my grief where I’m going to open the first verse and burst into tears," Tomlinson explained while interviewing with Radio 1 Newsbeat. "It was something I needed to get off my chest. I used to lean on my mum for a lot of things — anytime I needed advice on something she would be the first call I made."

"There is a lot of fight in life and I just get on with it. I’m quite a positive person but there’s no two ways about it — it’s sad what happened to me," he continued, but making sure to add, "I don't want people to get caught up in the sadness of it... The song should be hopeful."

I'm desperately trying to not get "caught up in the sadness," but it's pretty hard, TBH.

The emotions definitely don't stop there, though, because Louis Tomlinson's "Two of Us" lyrics will have you reaching for your box of tissues before the first verse is even over. The song begins with the lyrics:

It's been a minute since I called you / Just to hear the answerphone / Yeah, I know that you won't get this / But I'll leave a message so I'm not alone / This morning I woke up still dreaming / With memories playing through my head / You'll never know how much I miss you / The day that they took you, I wish it was me instead / But you once told me, "Don’t give up, You can do it day by day" / And diamonds, they don't turn to dust or fade away

Then, the chorus goes:

The song continues on, with the lyrics:

I could feel your blood run through me / You're written in my DNA / Looking back in every mirror / I know you'll be waiting / I'll see you again / But you once told me, "Don’t give up, You can do it day by day" / And diamonds, they don't turn to dust or fade away

Then the chorus is sung twice, before he sings:

You can't say that I didn't warn you that there would undoubtedly be tears. And, if you feel like keeping those tears coming, you can watch the "Two of Us" lyric video below:

Sending a big hug to Louis right now, and praising him for turning his grief into something truly wonderful that honors his mother.