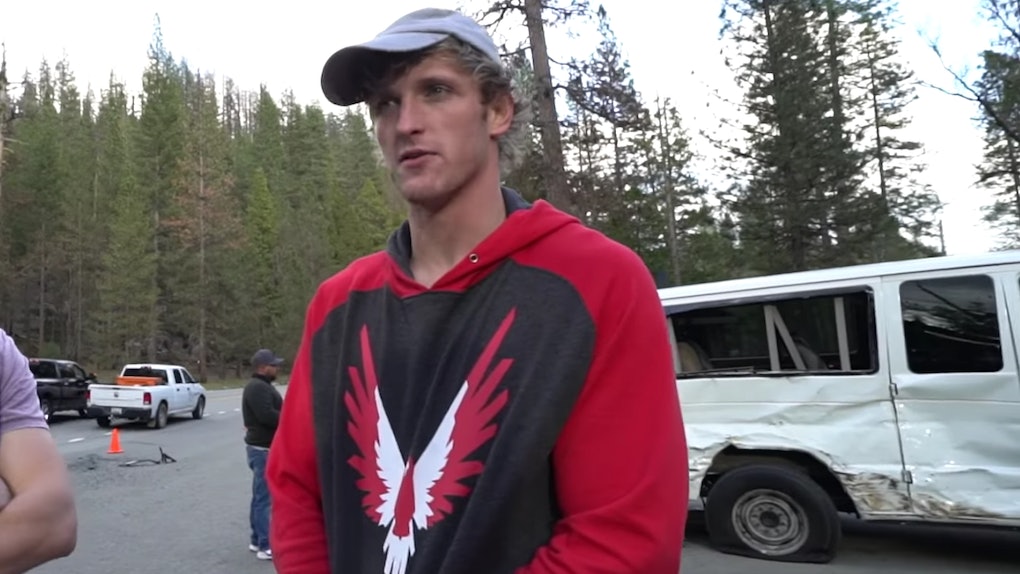 YouTube star Logan Paul is no stranger to controversial headlines. Back in December 2017, Paul posted a vlog to his channel that featured footage of an apparent suicide victim in Japan's Aokigahara forest (aka the suicide forest). The backlash was real, and Paul was away from YouTube for a while. He's back online and posting videos again, and his latest vlog features a car accident that Paul happened upon while vacationing in Yosemite National Park. After watching the vlog, it appears Logan Paul's Yosemite video exploits a car crash, and you might wonder if he'll ever learn from his mistakes.

According to his recent vlogs, Paul was camping and exploring Yosemite with his friends, and his vlog on April 5 shows what happened on their final day. He called the vlog, "Our last day in Yosemite was a disaster," and the opening footage shows Paul hearing the car crash, according to Mashable. The video quickly cuts to the morning before the accident, and after promoting his merchandise and showing his wild kayak adventure, Paul finally shows the car crash midway through the vlog.

In the video, Paul and his friends are seen running away from the river after falling out of their kayak when they hear the crash. They keep running toward the site of the accident, and they finally see the two vehicles involved in what looks like a car wreck. Paul shows what seems like genuine concern for the parties involved as he asks if they need help, and you can hear someone in the background who was presumably involved in the crash painfully crying out, "Ow, ow, ow!"

The two vehicles involved in the accident appear in the video to be a large cargo van and a massive pickup truck, and the damages are evident at first glance. Paul's friend in the video says the truck T-boned the van, and both cars have visible damage. One of the cargo van's side windows appears to have been completely removed from its frame. You can quickly tell that this is much worse than a fender bender.

Paul then turns the camera on one of the families who were involved in the crash when he asks if they've called for help. They assure him that they have called the police, and they are all OK. While it seems as though the family has the situation under control, they also appear visibly shaken after the crash. It's not clear from the video how many people were in the respective vehicles at the time of the accident, but the family Paul filmed did appear to have three children with them, so that likely heightened the intensity of this scary incident for them.

After filming the shaken up family, Paul shows even more footage of the badly damaged vehicles. It's at this point of the video where Paul's concern for the people involved in the accident seems to fade away. After it's clear there's nothing Paul or his friend can do to help the situation, they continue showing more footage of the wrecked vehicles and the families involved instead of shutting down the camera.

Paul and his friend quickly leave to retrieve their kayak, and they later return to the scene of the accident to check on the families. When Paul gets to the site of the accident, the police are there, and the families are gone. He does, once again, seem to express concern for the well-being of the people involved in the accident, but the Yosemite vlog ends as Paul shows the badly damaged cargo van and tells his friend, "We shoulda just listened to the signs, bro. We should get outta here."

In the end, it seems as though the footage of the accident and families involved wasn't integral to the vlog, and some viewers took to Twitter to express their disappointment with putting the car crash footage in the video.

"...and now exploiting car-crash victims for views. Does this sound good to you?"

"...Put the camera down and freaking see if they need actual help instead of point a freaking camera in their face."

"So nice to know that at our most vulnerable times, there is someone hanging out, ready to film us without permission..."

It's not as controversial as his Japan vlogs that showed Paul offending Japanese culture and filming an apparent suicide victim, but it seems Paul has not yet learned every moment of his day is not essential vlog material.

Hopefully the next time Paul encounters a scary incident like this car crash, he can use better discretion that doesn't involve filming a shaken up family and their wrecked car.