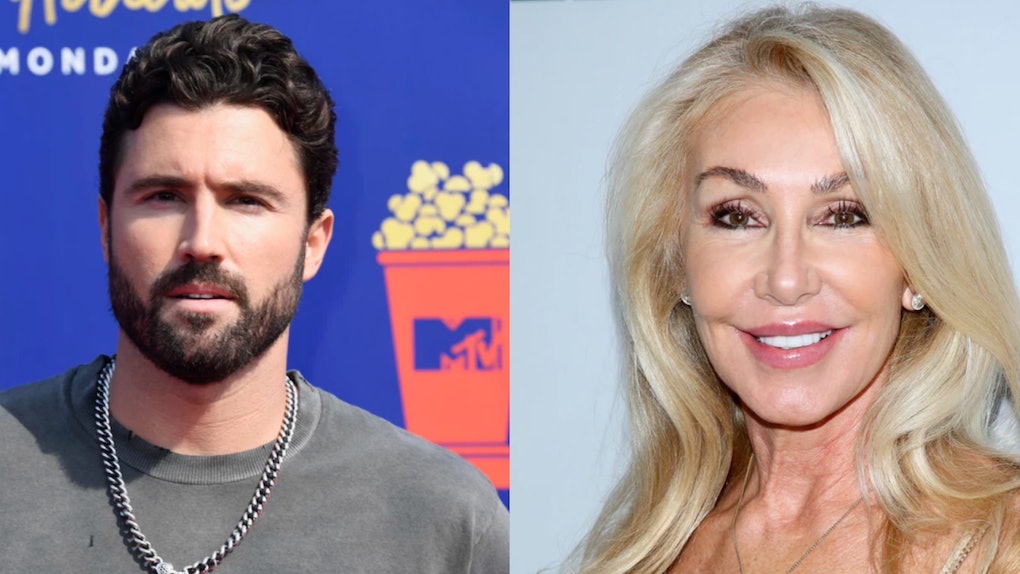 As if the Brody Jenner-Kaitlynn Carter saga couldn't get plot-twistier, Jenner's mom is now in the mix. Linda Thompson liked Instagram comments about Kaitlynn Carter that are shady as heck. This comes a couple weeks after Jenner and Carter announced their split. (Reps for the couple confirmed in a statement to Bustle, "Brody Jenner & Kaitlynn Carter have decided to amicably separate. They love and respect one another, and know that this is the best decision for their relationship moving forward.") This also comes a few days after Carter and Miley Cyrus were reportedly kissing in Italy, while on vacation with Miley's older sister Brandi.

Thompson took to Insta to post the Dalai Lama quote "Silence is sometimes the best answer," splashed over a dreamy, filtered pic of the woods. (And if you didn't realize that silence is the best answer, her caption read, "When feelings are ineffable, often it is better to say nothing at all. #Speechless.")

That would be chill and zen, and only slightly shady, given the circumstances. Except, Thompson took it a step further by going through her Insta comments and liking a few brutal ones. One comment read, "I think she’s so hurt and trying to get his attention! Not the way to do it, but sad all around!” And another that earned Thompson's like was, “Speechless is right! When you are married to Brody or Liam [Hemsworth], I mean some of the best-looking guys on this planet. What the heck?”

The comments that Thompson liked echo sentiments from one Jenner's closest friends, Brandon Thomas Lee. Speaking to E! News, Lee said, "It’s just like, 'Why?' They’re just obviously messing with their two ex-husbands. And they’re all friends... So, why? It just seems so ridiculous to me.”

Of course, as a lot of folks have picked up on: Cyrus and Carter kissing has nothing to do with the male gaze. It has more to do with sexuality being fluid, and Carter and Cyrus blessedly living in an era where women and femmes can express their desires without apologies.

Post-breakup, Jenner has been a bit of smart-mouth — like mother, like son. Apart from commenting on Carter's selfie with Cyrus, Jenner was on Insta joking to his partner in crime, Brandon Thomas Lee, about him and Hemsworth holding hands on a beach soon. (@commentsbycelebs caught Cyrus coming in hot with a clapback: "Go take a nap in your truck and cool off. #HotGirlSummer.")

Hemsworth, on the other hand, has been nothing but sweet. Like all the other key players in this saga, Hemsworth took to Instagram after his breakup with Cyrus. The caption Hemsworth paired with his sunrise was to the point:

Hi, all. Just a quick note to say that Miley and I have recently separated, and I wish her nothing but health and happiness going forward. This is a private matter, and I have not made, nor will I be making, any comments to any journalists or media outlets. Any reported quotes attributed to me are false. Peace and love.

With everyone trying to out-quip each other and appear more unbothered and wise than the next person, the Instagram melodrama doesn't seem like it's going to let up any time soon. And when each development is more exciting than the last, who can blame Thompson for wanting to get in on the action? A subtweet or shady like is always worth 1,000 words.