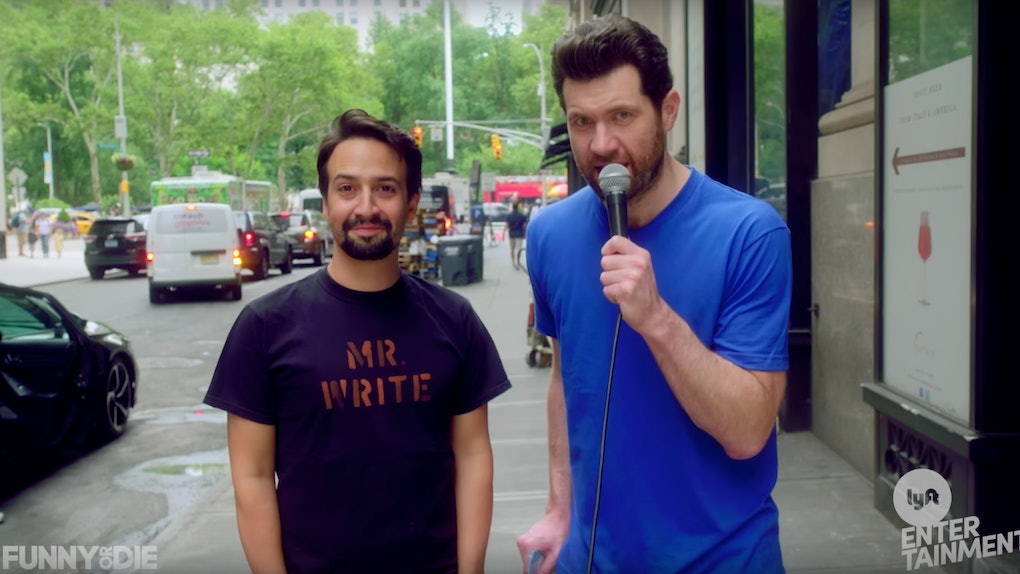 The world can feel pretty heavy nowadays, with a near-constant stream of sad, scary news and Twitter feeds filled with fights and vitriol. But, there is one bright spot that we can always turn to, one beacon whose Twitter feed is full of hope and encouragement. I'm talking about the man whose smile could light up a whole city and who also happens to be a two-time Pulitzer Prize winner: Lin-Manuel Miranda. In Miranda's Billy on the Street segment, comedian Billy Eichner takes him to the streets of New York to spread his joy.

In case you missed the last few years on the internet, Miranda is the writer and original star of the massive hit Broadway musical Hamilton. He's also involved in an insane number of other projects, including starring in the upcoming Mary Poppins Returns, writing the music for Disney's Moana, and contributing a song to Star Wars: The Force Awakens. But also, perhaps even more importantly, Miranda has become known for sprinkling the internet with little bits of light-hearted fun. He continues to record and release new Hamilton music, and he sends inspiring "gmoring" and "gnight" tweets to his over two million followers twice daily. The positive tweets are so popular that they were recently compiled and published in a book.

Eichner knows that Miranda is one of the few people out there to pretty consistently put a smile on other people's faces, so he took him out on the street to see if people are happy, and to try to make them happy if they're not. You can see if the plan worked in the segment below:

In typical Billy on the Street fashion, Eichner parades through the streets of New York with his guest stopping (and good-naturedly harassing) pedestrians until they interact with his guest and him. The video starts off strong: The first bystander is not only already a fan of Miranda, but is actually listening to Hamilton in that moment when they meet. Her Miranda joy only grows exponentially when the star goes in for a hug.

Other bystanders aren't quite as pleased. One woman doesn't recognize Miranda at first, but once Eichner tells her he's the Hamilton guy, she lets loose. She shouts, "I apply like every day on the stupid app to win tickets and I never do, so you’re out of sight and out of mind because I’ll never ever see that show!" With his sound barrier-breaking scream, Eichner shouts back, "You tell ‘em, b*tch!" Oh well, Lin, I guess you can't win 'em all.

The last guy they find on the street takes the bait when Eichner starts a chant of "love is love is love..." in reference to the positive message of Miranda's moving and meaningful 2016 Tony Award speech. As they repeat the phrase in unison, Miranda embraces Eichner and their new friend, spreading more of his happy energy. Of course, Eichner kills the vibe with one more high-pitched scream, but still Miranda prevails in spreading some more happiness to the streets.

I mean, how could so much talent and warmth in one smile not just melt your heart? Here's a pitch for spinoff of Billy on the Street that's just a half-hour of Miranda hugging people while he sings them Hamilton lyrics. It definitely would make people happy.

More like this
Addison Rae's Response To Backlash Over Her 'Tonight Show' TikTok Segment Has Fans Split
By Brandy Robidoux
These Tweets About Jimmy Fallon's TikTok Dance Follow-Up Segment All Say It's Too Little, Too Late
By Brandy Robidoux
Here's How To Stream 'Nomadland' So You Can Finally Get The Hype
By Rachel Varina
Stay up to date