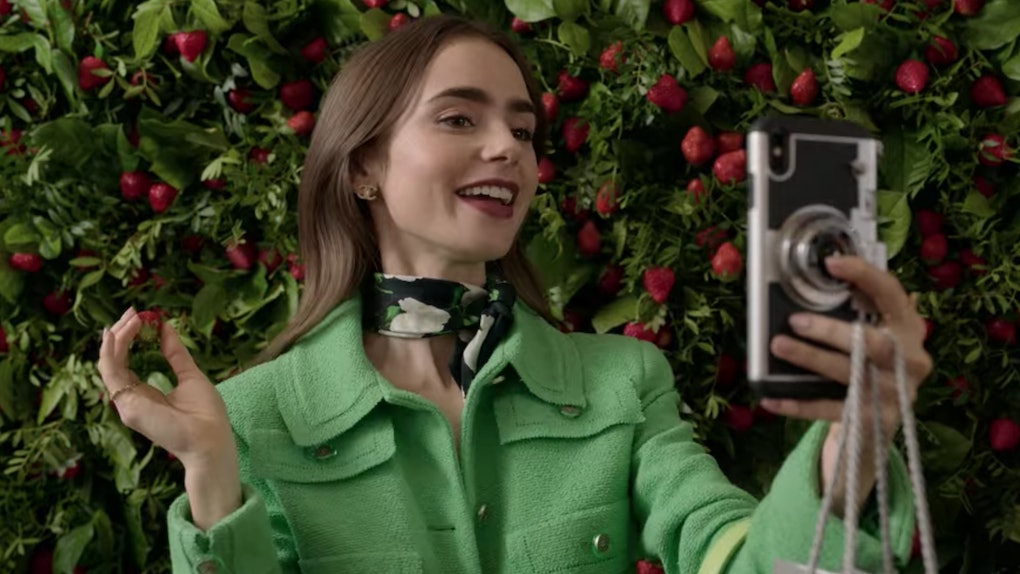 Lily Collins Was Wrong About Emily's Age In 'Emily In Paris,' She Said On IG

Emily Cooper's Instagram feed may be the talk of Paris, but over the past few days, it's the social media strategist's age that has been the hot topic of conversation. In a recent interview, Lily Collins revealed how old she thought her Emily in Paris character was... and it shocked pretty much everyone who'd seen the series. After her comment went viral, Lily Collins admitted she was wrong about Emily's age in Emily in Paris in true Emily fashion: with the perfect Instagram post.

The whole controversy around Emily's age started with Collins' Oct. 6 interview with British Vogue, in which she said Emily was never given a specific age to her knowledge, but her best guess was that she was a recent college grad around the age of 22. "I don’t believe we’ve ever given her a specific 'number' for her age, but I believe that she’s pretty fresh out of college. Maybe this is her first year after graduation. I want to say she’s like, 22-ish," she told the publication.

The age reveal quickly went viral on Twitter, with fans of the show arguing it would be far too unrealistic for a 22-year-old to have Emily's credentials and position. In the series, Emily said she has a master's degree and is shown to have considerable marketing experience in order to land a job helming social media strategy at an established Parisian firm. Collins clearly caught wind of all the chatter around Emily's age, because she took to her Instagram story to admit she was wrong about Emily being 22.

Collins shared a shady gif of her character, joking Emily was giving her some serious side-eye after she got her age wrong, wiring "Emily looking at me when I get her age wrong. Sorry girl." Collins also added that although Emily may not be 22, she does act like it sometimes.

So now fans know Emily is older than 22... but the mystery of her exact age remains. Luckily, Collins' costar Lucas Bravo — who played Emily's love interest Gabriel on the show — weighed in with his best guess.

"I would say she's probably 24," Bravo said in an interview with E!'s The Rundown. "Something happens after 26 where women start exploring... in terms of personality. I feel like she's still very strong willed and she has certainties, but yeah I would say [she is] around 24."

Well, there you have it. Fans may argue 24 is still pretty young for Emily's purported experience and position, but at least it makes her master's degree technically realistic. Given all the interest in this plot point, maybe Emily in Paris will officially reveal Emily's age in Season 2, if Netflix picks up the show for another season.