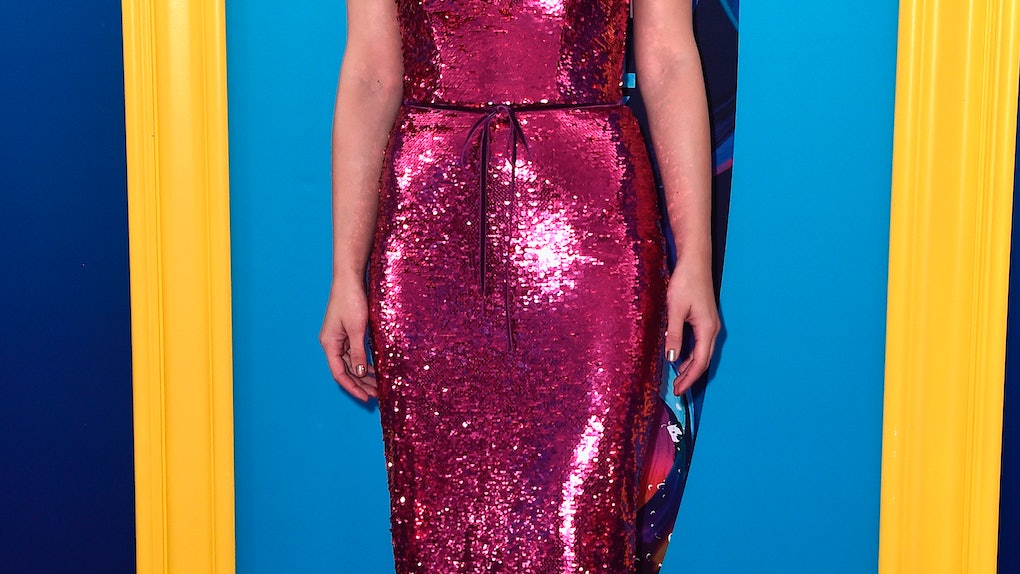 The 2018 Teen Choice Awards were Sunday, Aug. 12 and fashion was the real winner of the night. The stars came out in droves and shone bright on the red carpet, but Lili Reinhart's Teen Choice Awards dress was the brightest of them all. Think: hot pink, sequins, and Elle Woods.

Before all the on-stage acceptance speeches, however, Reinhart made a big splash on the Teen Choice Awards red carpet. She set the tone for the night in a sequin-covered dress, as sparkles, glitter, and metallics made up all of the hottest looks of the night. Scroll through to see who wore what and all of the fiercest beauty looks off the night.

Reinhart described her look as "Moody sultry Elle Woods meets Vogue" in an Instagram post, and she couldn't have been more right.

I'd say sequins give you endorphins, and endorphins make you happy, and, well, you know the rest.

Reinhart's ankle-length sequined dress from Monique Lhuiller featured a tonal velvet bow at the waist and had Elle Woods vibes all over it. The actress also wore a popular shoe by Olgana – Kylie Jenner wore the same pair for her 21 birthday!

Reinhart's beauty look at a subtle rose gold glow to it, and she wore her hair down for a change of pace from her character Betty Cooper's signature high ponytail.

Singer Meghan Trainor wore the most comfortable looking outfit of the night, a sequined pantsuit that gave off some chic pajama vibes, which she rocked with a pair of heavily metallic silver pumps.

With her silver eye shadow, Trainor kept the metallic streak going in her beauty look. She wore her hair in a high ponytail with an exposed hair tie, which is so '90s.

Singer Bebe Rexha won the award for Choice Country Song ("Meant To Be" featuring Florida Georgia Line), and hit the red carpet in a pink patent leather getup. Underneath her vibrant jacket was an ultra-shiny crystal bra and layers of Norman Silverman diamond necklaces. Her look was so shiny on top that I almost didn't notice her pink flame shoes!

The sequins were more subdued in a few looks from the night. Actress Chloe Grace Moretz wore a menswear-inspired Louis Vuitton ensemble with an oversized blazer worn on top of what looks to be a pair of sequined shorts.

Katherine Langford, of 13 Reasons Why and Love, Simon, wore a black lace dress but brought the shine to her beauty look. The actress wore stick-on silver stars and rhinestones by each eye, to accent her iridescent eyeshadow. Makeup artist Fiona Stiles was the genius behind this galactic look.