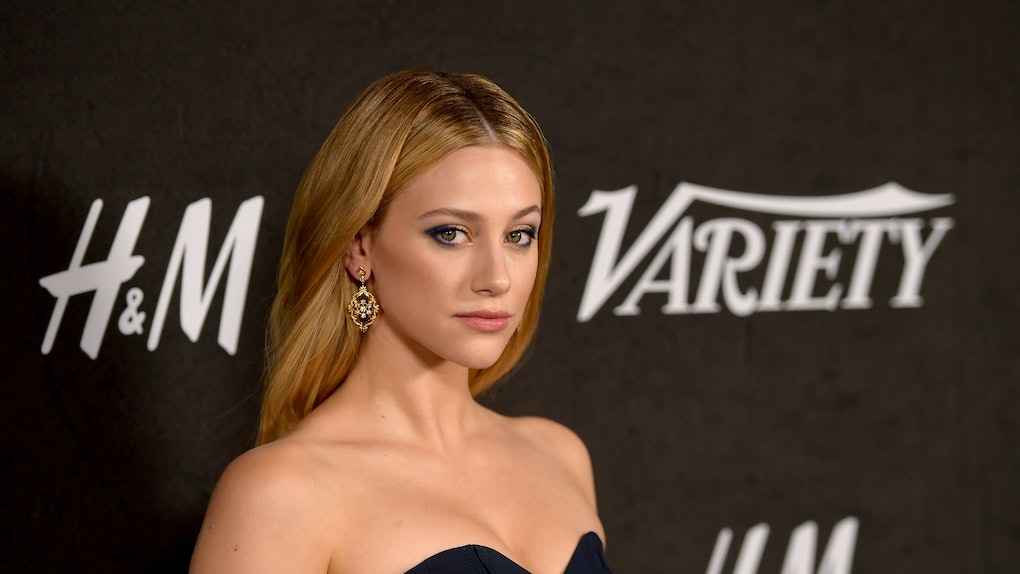 Anything can spark an insecurity: For some, it’s a matter of whether or not they can still fit into their favorite pair of jeans; for others it could be a speech impediment they’ve experienced since childhood. For Lili Reinhart, it’s the moment she grazes her cheek or forehead, and her fingers happen to roll over a single bump, or worse, a cluster of breakouts. Riverdale’s sweetheart has been open about her struggle with body dysmorphia in the past, but during a recent interview with Glamour, Lili Reinhart revealed acne is what triggers her body dysmorphia the most, and one spot is all it takes to affect how the actress feels about her appearance from one day to the next.

It really goes to show that, at the end of the day, it doesn’t matter how many Instagram followers you have, or how many magazine headlines speak highly of your beauty. You are your own worst critic, and sometimes, how you feel about yourself is, unfortunately, somewhat out of your control. “I cried last night to my mom over FaceTime because of how ugly I felt I looked,” Reinhart told Glamour, noting this isn’t the first time acne affected how she felt about her overall appearance. A single blemish can ruin her entire day, she told the magazine, and over the years, her cystic acne has apparently been a big catalyst behind some of her sadness and anxiety.

If you've personally never struggled with body dysmorphia, it can be a difficult concept to grasp. To put it simply, NYC-based psychotherapist, life coach, and Dove partner, Christine Gutierrez, defines body dysmorphia as a condition in which someone becomes preoccupied with small, or even nonexistent “flaws” in their appearance. "In the DSM-5, which is the Diagnosis and Statistical Manual of Mental Disorders, [body dysmorphia] is classified in the obsessive compulsive disorder category,” Gutierrez tells Elite Daily. In other words, someone with body dysmorphia will likely develop obsessive compulsive behaviors, such as constantly checking the mirror and asking others about how they look. As a result of this kind of constant fixation, Gutierrez adds, whatever is causing the dysmorphia — in Reinhart’s case, acne — can lead to either “significant distress or impairment in social, occupational, or other important areas of functioning.”

According to the International Obsessive Compulsive Disorder Foundation, body dysmorphia affects anywhere from five to 7.5 million people in the United States alone, and the condition can stem from a variety of things. For instance, acne dysmorphic disorder is a type of body dysmorphia caused by acne that is, according to clinical psychotherapist Matthew Traube, MFT, a relatively unknown struggle. Back in September 2017, Traube told Refinery29,

In my practice, I often see patients who have objectively very little acne and catastrophize it. They are aware that others don’t see it, but for them it’s debilitating. It can cause limited social interactions, occupational issues, or prevent people from pursuing relationships.

Statistics from the American Academy of Dermatology reveal that a whopping 50 million Americans struggle with acne every year. Breakouts will typically form during puberty, but adult acne is, unfortunately, also a thing. And while some people have an easier time coping with blemishes by applying specific balms and creams, for others like Reinhart, acne can significantly impact how they view themselves and their self-worth in a pretty big way. “I see any acne on my face as an obsessive thing,” the 22-year-old actress told Glamour. “[It’s] the only thing I can think about, and it makes me want to hide.”

But despite Reinhart's struggle with body dysmorphia, this Betty is doing her part to break the stigma surrounding acne, body image, and making sure her own insecurities aren't so dominating over her own mental health. "If people could just open their eyes a little bit and see there’s a wider range of beauty,” she told Glamour, “there’d be so much more happiness.” Truer words have never been spoken.