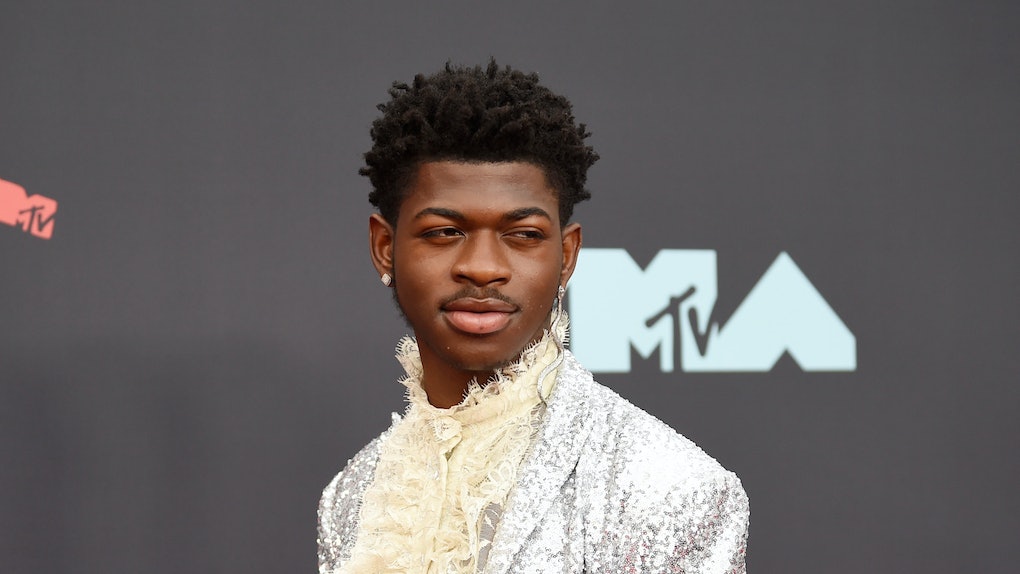 He's gonna take his silver glittery suit to the 2019 Video Music Awards in New Jersey, and he's gonna (hopefully) snag at least one of his eight nominations. Just kidding... kind of. Seriously, Lil Nas X's VMAs 2019 outfit is adorable and can't nobody tell him nothing in that shiny little number. If this is what he wears to a rodeo, then that's the only kind of rodeo I want to go to.

Lil Nas X's look for his first-ever VMAs is a custom design by fashion designer Christian Cowan. (According to Christian Cowan's Instagram featuring Lil Nas X's look, the rapper is the first man to be dressed by the designer.) The outfit features a stunning silver sequin cropped blazer, matching trousers, and a cream lace blouse with ruffles down the front, a buttoned-up collar, and long sleeves, with lace panels extending from the cuffs. As far as his footwear, the artist had the silver boots to match, of course.

As incredible and on-brand as his outfit was, (let's call it country western glam), I couldn't help but notice the rapper's nails. If you look closely, you can see that the rapper spelled out "Lil Nas X" across his finger nails in black font with one letter per nail. As for the remaining three nails, he adorned them with silver rhinestones to match his 'fit. If there's one thing that I love more than a sequin suit, it's a sequin suit with a matching mani that is equally as extra as the outfit itself.

When it came to accessorizing his ~lewk~, the 20-year-old rapper's stylist, Hodo Musa, paired his customized mani with an array of silver rings, one silver stud earring, and one long dangling silver snake earring. And judging from the life Lil Nas X brought to the red carpet, the rapper certainly knows how to dazzle in his blinged-out look.

Lil Nas X blessed the VMAs red carpet in Newark, New Jersey for the first-time ever this year, doing so to celebrate his whopping eight nominations. That's right, the breakout country rapper is up for Best New Artist, and received seven additional nominations for a little song you might've heard called "Old Town Road." The song, which is undoubtedly one of the most popular songs of 2019 — it spent a record-breaking 17 weeks at number one on the Billboard Hot 100 — is up for Best Video, Best Hip-Hop Video, Best Direction, Best Editing, Best Collaboration, Best Art Direction, and Best Song.

On the off chance that Lil Nas X doesn't snag at least one of his eight nominations, at least he successfully slayed his red carpet look.

While Lil Nas X is certainly one of a kind, I can't help but think that his look is similar to something that the late artist Prince would rock. Maybe it's the ruffles, or maybe it's the shiny fabrics. Regardless, he looks stunning, and I can't wait to see more red carpet looks from the artist in the near future.

While my fingers are crossed that Lil Nas X takes home at least one moon man this year, he should rest easy knowing he absolutely won his VMAs red carpet debut.