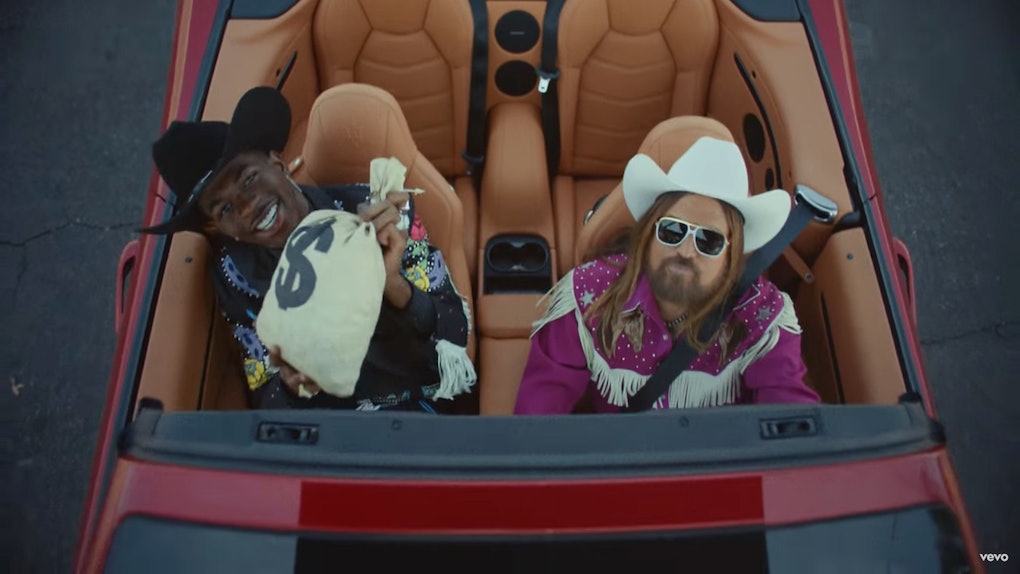 Lil Nas X's "Old Town Road" Music Video Has So Many Celeb Cameos, Because It's That Good

So without further ado, let's get into all those celebrity cameos!

Obviously, Billy Ray Cyrus is one of the first major celeb faces to appear alongside Lil Nas X in "Old Town Road"'s music video. The video begins with Lil Nas X and Cyrus riding horses furiously down, well, an old town road circa 1889. Nas X is carrying a bag of money in his hands which one can assume is stolen since they're being pursued by police officers on horses. Billy Ray is the country crooner who breathed even more life into the viral track after it was unceremoniously yanked off the Billboard Country Charts for supposedly not incorporating enough "country elements." It went without saying he'd feature in the video. Take that, Billboard!

Iconic comedian Chris Rock makes his cameo alongside social media personality, HaHa Davis, as the Sherrif and his debuty in town. Rock decides to call off Davis and let Lil Nas X and Cyrus escape because, according to him, "When you see a black man on a horse going that fast, you just gotta let him fly!" Whatever you say, Chris!

Lil Nas X is transported to the present day by way of some old-country wormhole, where he ends up racing rapper and actor, Vince Staples, on his horse. Staples jokes, "I seen you before. You're from Compton, right?"

Oh, Diplo is there, too, for some reason. He's playing one of those old-school contraptions they used to wash clothes (I think?) as a guitar.

"Old Town Road" is a bonafide smash hit, so it's no surprise at all that so many celebrities wanted to be involved in what's sure to go down in history as an iconic moment in music video history as well.

The only person that was missing? Definitely North West. After she dropped her own, self-produced, self-chroeographed, and self-directed music video for the track, I'm surprised that Lil Nas X didn't jump back into the studio with North West to do some reshoots. She really should have been part of it, if you ask me.

Watch the whole video in all its glory below!

More like this
Rosé From BLACKPINK's "Gone" Music Video Is The Ultimate Sad-Girl Aesthetic
By Abby Monteil
What Does Taylor Swift's Vault Door Video Mean? Fans Are Decoding It
By Cianna Garrison
Olivia Rodrigo's "Deja Vu" Music Video Outfits Are All Delightfully Retro
By Margaret Blatz
Stay up to date