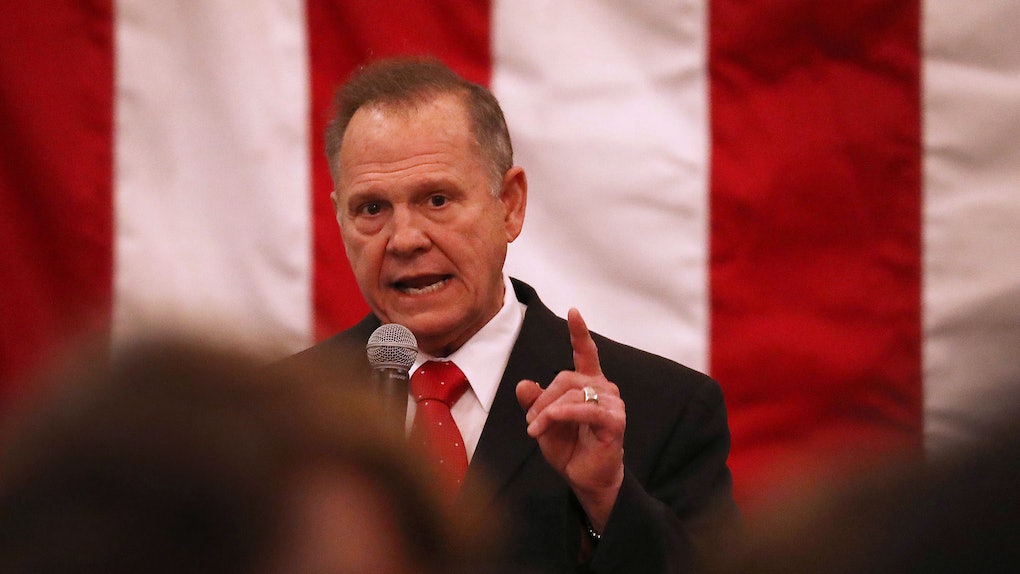 Just when you thought (or hoped) that you'd heard the last of one-time Senate hopeful Roy Moore, his name is back in the news. This time, however, it's for comparatively better circumstances. The controversial candidate, who has been accused of sexual misconduct by eight women, spent much of the last few weeks of his campaign denying the accusations and questioning the veracity of their claims. And now one of the accusers, Leigh Corfman, is suing Roy Moore for defamation over his comments.

The Washington Post reported on Jan. 4 that Corfman, one of the first women to come forward last fall and accuse Moore of sexual misconduct, has sued the disgraced former politician for defamation due to the "harsh personal attacks" Moore and his campaign levied against her in public.

But Corman isn't seeking monetary compensation (aside from legal fees). Instead, what she wants, if she wins her case, is "a declaratory judgment of defamation, a public apology from Moore, and a court-enforced ban on him or his campaign publicly attacking her again."

In a statement, Corman said that the suit's purpose is “to do what I could not do as a 14-year-old — hold Mr. Moore and those who enable him accountable.”

In a Nov. 9 story published by the Post — mere weeks before the December special election for the vacated Alabama Senate seat — Corfman alleged that Moore made unwanted sexual contact with her when she was a child. Corfman claimed that, in 1979, a then-32-year-old Moore approached her while she was sitting outside of a courtroom. She was 14-years-old. Moore allegedly asked for her phone number and started picking her up around the corner from her house and taking her back to his home. Corfman alleges that he kissed her during the first incident and initiated unwanted sexual contact during the second incident. Moore has repeatedly denied the allegations, even going so far as to deny ever having met Corfman.

In fact, Moore discussed the matter on Nov. 10 on Sean Hannity's radio show. He said of Corfman, "It never happened. ... I don't know Miss Corfman from anybody. I never talked to or never had any contact with her. Allegations of sexual misconduct with her are completely false." He additionally called the allegations "politically motivated."

Three other women also claimed in the same Washington Post story that Moore had approached them when they were teenagers and he himself was in his 30s, and tried to date them. As of January 2018, a total of eight women have accused Moore of various forms of sexual misconduct and attempts to date them when they were underaged. One of those women, Beverly Young Nelson, alleges that Moore sexually assaulted her when she was 16, trying to force her face into his crotch hard enough to leave bruises. She furnished a yearbook with Moore's signature and a note to a "beautiful girl" (to which, she later admitted, she added notes), in an attempt to prove that they knew each other after he denied ever having met her.

According to ABC News, at a campaign event on Dec. 11, the night before the election, Moore urged his accusers to "tell the truth." Further, he levied accusations that the stories of all eight women are "fake news" for political purposes.

The fake news began after I [had an] 11-point lead in the general election. But they waited till 30 days before this general election to come forward. Now they've allowed their pictures to be on a political advertisement, and they've gone on national television arguing their case, after waiting 40 years.

Perhaps most incendiary, a Moore spokeswoman, Janet Porter, called Moore's accusers "criminals" who are "seeking revenge" during a Dec. 5 interview on CNN.

For the purpose of her suit, Corfman will have to prove that Moore (and his campaign) knowingly made false claims about her, damaging her reputation.

Corfman's suit is part of a larger trend of using civil lawsuits as a way to litigate sexual misconduct cases for myriad reasons, chief among them: expired statutes of limitations, and the difficulty of prosecuting sexual assault. Another such civil suit is from one of President Donald Trump's accusers, Summer Zervos. Zervos is one of more than a dozen women (19, by some publications' counts) who have accused the president of sexual misconduct and assault. (Trump has denied all the allegations against him, and the official White House position is that his accusers are lying.)

Only weeks after the initial Post story came out, Corfman wrote an open letter to AL.com about why she came forward. In the letter, she said, "I am done being silent."