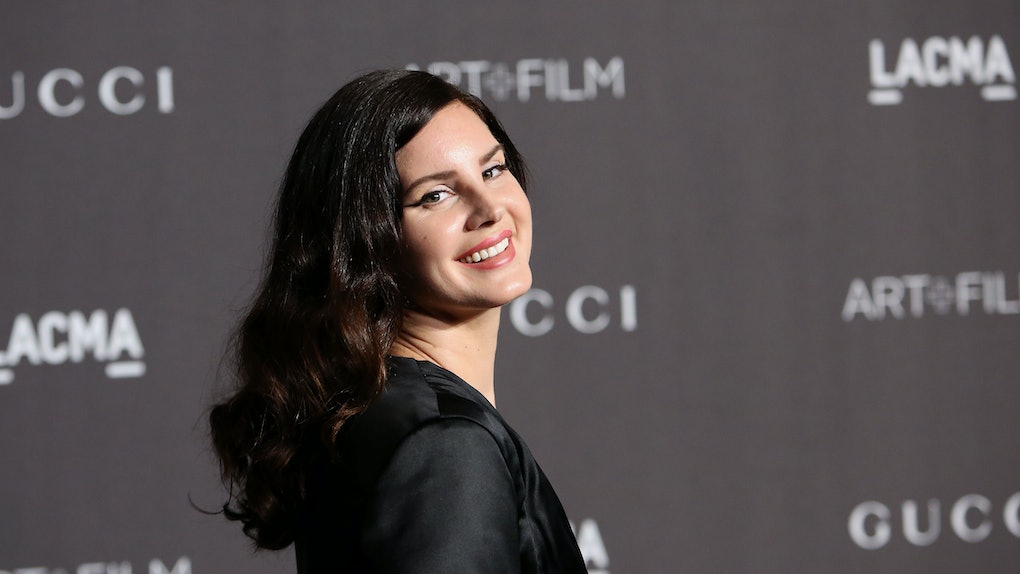 Will I still love Lana Del Rey when she's no longer young and beautiful? Um, obviously, though the chance of Lana ever being anything but beautiful is slim to none. The stunning singer is back with her sixth studio album, and while it's very reminiscent of her older albums, the music is just as gorgeous as ever, not to mention painfully real. Lana Del Rey's Norman F*cking Rockwell lyrics about relationships are relatable AF, and why am I not surprised? When the first line of the first song on an album is "Goddamn man child," then you know you're in for a treat.

If the name Norman Rockwell doesn't mean anything to you, let me give you a quick history lesson. Rockwell was a painter best known for illustrating idyllic (and oftentimes oversimplified) images of American life that, together, personified the American Dream — or, at least, Rockwell's interpretation of it. In her album, Lana dismantles Rockwell's fantasy, as well as the idea that anything is ever as comfortable or simple as it appears. From the pitfalls of masculinity to the trouble with vulnerability, Lana Del Rey explores all the messiness of love, and her lyrics can speak to anyone who has ever suffered a broken heart.

The album kicks off with the title song, where — after 40 seconds of pretty instrumentals — Lana comes in with and sets the mood with, "Goddamn man child." Though the song ostensibly critiques the titular artist's limited, rose-tinted fantasy of American life, it also evokes a self-centered, self-important man who Lana has settled for while subconsciously aware that she could have better.

You act like a kid even though you stand six-foot-two / Self-loathing poet, resident Laurel Canyon know-it-all / You talk to the walls when the party gets bored of you / But I don't get bored, I just see you through

She rhetorically asks, "Why wait for the best when I could have you?" though the answer, of course, is that any wait is better than a relationship with this guy.

In the first single from the album, Lana recounts a conversation with an old lover who believed that they were bonded by their shared sadness. Rather than succumbing to the idea that she is messed up, Lana refutes this notion, declaring that she is actually doing well and that no one else can decide what she's feeling.

I ain't no candle in the wind / I'm the board, the lightning, the thunder / Kind of girl who's gonna make you wonder / Who you are and who you've been

Other people may try to decide who you are, but to Lana, you should never let others skew your sense of self, even if it threatens the dynamic of your relationship.

The album's second single is a little grittier than the first, exploring past memories with a lover without ever sounding particularly nostalgic. In the nearly 10-minute-long song, Lana fondly recalls a relationship that was once good, but rather than pining for it, she accepts that it wasn't meant to last.

You're in the yard, I light the fire / And as the summer fades away / Nothing gold can stay

She tells her old lover, "Oh God, miss you on my lips," but while there's no bitterness in her ode to that past flame, there isn't all that much longing, either. That love was good, but now it is over.

"Love Song" is all about a relationship that is still new and that hasn't yet been defined, which makes it both scary and exciting. While Lana suggests that she wants this new relationship to be more than just a brief fling, she's not yet sure how her love interest feels or whether she can feel free to be herself.

I believe that you see me for who I am / So spill my clothes on the floor of your new car / Is it safe, is it safe to just be who we are?

Will this new love "stick around" as she hopes, or will they disappoint her? Only time will tell.

In this strange sort of love song, Lana addresses a lover with whom she has some issues, though she fears saying too much and pushing this lover away. The insinuation is that she has been hurt by other people in the past, and while she doesn't want history to repeat itself, she also doesn't want to come across as controlling.

There's things I wanna say to you, but I'll just let you live / Like if you hold me without hurting me / You'll be the first who ever did

Rather than speak her mind, she decides that it's best to hold her tongue, as being a little dissatisfied in her relationship is better than saying the wrong thing and wrecking it.

What happens to the people you once loved who are now no longer a part of your life? Lana explores this idea in "How to Disappear," alluding to past lovers and imagining a future scenario in which one of these lovers actually commits to her and starts a life with her.

What you been up to my baby? / I haven't seen you 'round here lately / All of the guys tell me lies but you don't / You just crack another beer / And pretend that you're still here

While she dreams of a lifelong bond, she instead finds herself in transient relationships that only end up disappointing her.

"Happiness Is a Butterfly"

In "Happiness Is a Butterfly," Lana sings about the struggle of trying to make a relationship work that simply isn't. While she wants her relationship to succeed, because the alternative is being alone, her lover seems to be inconsistent and even cruel.

I said, "Don't be a jerk, don't call me a taxi" / Sitting in your sweatshirt, crying in the backseat / Ooh / I just wanna dance with you

To distract from the fights and the heartache, she tries to hold onto those simple physical pleasures, like dancing with her lover. However, just like happiness, those good times are elusive.

The title of this final song on the album says it all — even as a grown woman, Lana retains the fragility and dreams of a younger girl, and that vulnerability can be a dangerous thing. However, though she still hopes like someone who has never been hurt, age has given her the courage to face potential fears head-on.

While she has been hurt and her hope has been tested, she still holds on to that hope of finding love. The whole album is decidedly more bitter than sweet, but I think there's a reason that Lana chose to end on this optimistic note.

Just like Norman Rockwell's ideation of the American Dream, relationships are never as easy and sweet as rom-coms may lead you to believe. But if Lana Del Rey's Norman F*cking Rockwell proves anything, it's that even someone who has suffered the worst kind of heartache still has a reason to dream of a happy ending. After all, what's life without hope?