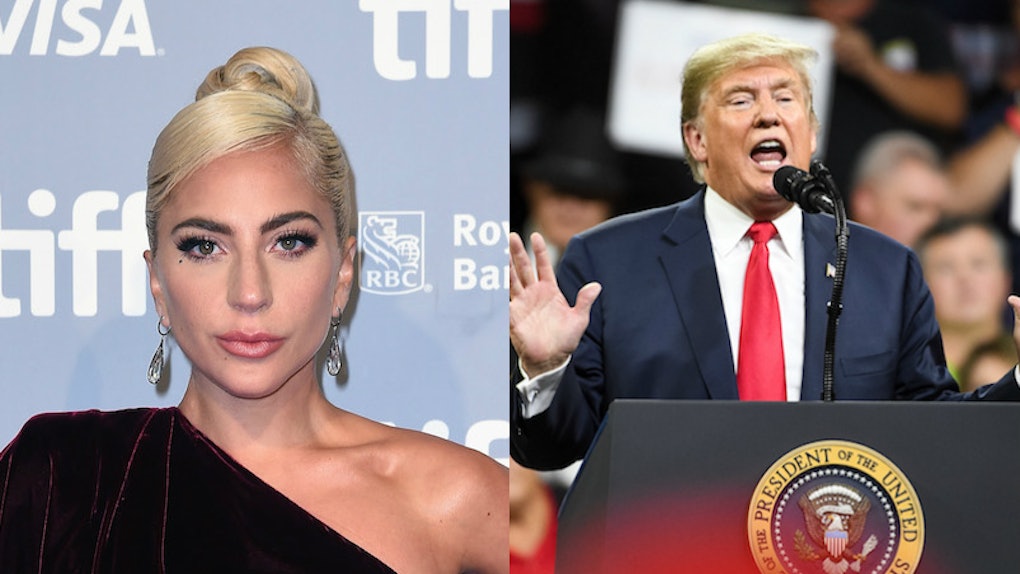 Well, congrats. You've somehow survived yet another week in the Trump presidency. Unless you're living under a rock, you've probably heard about psychology professor Christine Blasey Ford's allegation of sexual assault against Supreme Court nominee Brett Kavanaugh. Kavanaugh has categorically denied all allegations. Elite Daily reached out to representatives of his for further comment, but did not receive a reply. Along with support of her actions, Ford has received plenty of backlash for speaking out — even from President Donald Trump. However, as a sexual assault survivor herself, Lady Gaga's comments about Christine Blasey Ford on The Late Show defended her against Trump's criticism. Despite these trying times, it was so inspiring.

On Thursday, Oct. 4, Lady Gaga was interviewed on The Late Show with Stephen Colbert about her latest film, A Star Is Born. After discussing her experience working with Bradley Cooper and meeting with the original movie's star, Barbra Streisand, Stephen Colbert brought up Gaga's views on the Kavanaugh investigation. As a seasoned activist, Gaga had some really incredible things to say about Ford speaking out against Kavanaugh — and some sharp words directed at Trump, after he mocked Ford at a recent rally. She also gave some serious insight as to what it's like being a sexual assault survivor. See the video below, if you haven't already.

When Colbert asked if she was comfortable about talking about "political stuff," Gaga confidently responded:

You know, when it comes to the political stuff with you, I'm gonna say, 'Bring it on.' Because what I have seen on the news with this debate of Kavanaugh versus Dr. Ford is one of the most upsetting things I have ever witnessed. It's heartbreaking. But I will tell you something — because I am a sexual assault survivor — and the truth is that [Donald Trump] was speaking in a rally, and he said she has no memory of how she got to the party. [He said] 'Should we trust she remembers the assault?' And the answer is 'Yes.'

Elite Daily reached out to the White House for a comment on Lady Gaga's The Late Show appearance, but did not hear back at the time of publication.

The singer goes on to explain why she believes Ford would — in fact — remember the assault, and her explanation is beyond eloquent. She essentially says that people tend to bottle up their trauma and put it away, and, sometimes, they forget little facts surrounding the traumatic incident. Gaga's explanation was passionate, intelligent, and extremely persuasive.

If someone is assaulted or experiences trauma, there is science and scientific proof — it's biology — that people change. The brain changes ... It can cause complete avoidance of wanting to even remember — or think about — what happened to you.

She then expanded on how she's seen that play out in this case, when she said,

But what I believe — what I have seen — is that when this woman saw that Judge Kavanaugh was going to be possibly put in the highest position of power in the judicial system of this country, she was triggered, and that box opened. And when that box opened, she was brave enough to share it with the world, to protect this country.

Elite Daily reached out to Lady Gaga's representation for further comment, but did not hear back at the time of publication.

To further explain the science behind it all, James Hopper, Ph.D., and David Lisak, Ph.D., published an article in TIME that explains how the brain processes trauma — and why certain facts might be forgotten.

According to Hopper and Lisak's December 2014 article, the hippocampus controls memory, and fear can alter the ability to store "contextual information." This means time sequencing could be off, which could explain why Ford wouldn't remember how she got to the party in the first place.

In the TIME article, Hopper and Lisak said,

The hippocampus encodes experiences into short-term memory and can store them as long-term memories. Fear impairs the ability of the hippocampus to encode and store 'contextual information,' like the layout of the room where the rape happened. Fear also impairs its ability to encode time sequencing information...

Hopper and Lisak further delve into how the hippocampus might process an attack. It can result in jumbled memories.

Recent studies suggest that the hippocampus goes into a super-encoding state briefly after the fear kicks in. Victims may remember in exquisite detail what was happening just before and after they realized they were being attacked, including context and the sequence of events. However, they are likely to have very fragmented and incomplete memories for much of what happens after that.

Video of Ford's testimony from Thursday, Sept. 27 comes off as very believable, but if you needed further scientific proof as to why there might be "holes" in her story, this research helps to explain it.

Lady Gaga was very brave to speak out in support of Ford, and, hopefully, it'll result in more women doing the same. Given how she must relate to Ford, Lady Gaga's inspiring words are highly valued in these trying times.