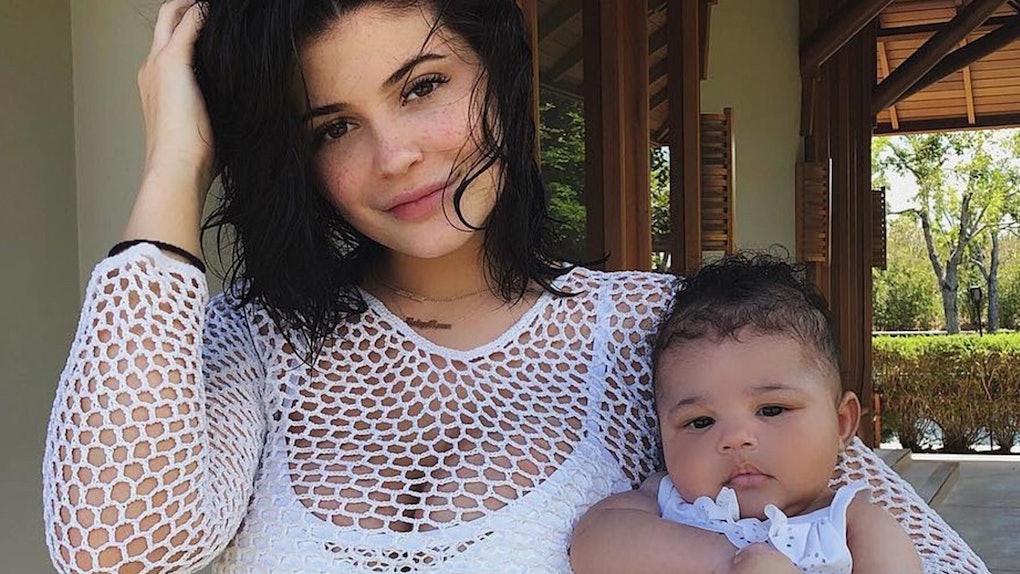 Kylie Jenner deleted all of her Instagrams of Stormi Webster's face just one month ago, but she's already back to posting photos and videos of her daughter. While she hasn't posted many selfies or posed photos that clearly show Stormi's face like she used to, she's increasingly showing that she's comfortable with featuring Stormi from time to time through her Snapchat and Instagram stories. Kylie Jenner's new video of Stormi came on Wednesday, July 11, and it's the cutest video she's posted yet.

The video shows Jenner and Stormi cuddling on Jenner's bed. It's not clear if Jenner took the video herself because it's possible that someone else was laying on the bed and filming it for her, but that's neither here nor there. What matters here is the cute moment between Stormi and her mama. Stormi is laying on her back while Jenner is situated above her, waving her hair in Stormi's face so she can play with it. (You can see Stormi's newly pierced ears in the video as well.) At the end of the short clip, Jenner gives Stormi a bunch of kisses on the cheek, and Stormi makes the classic babyface where she squints a lot and looks overstimulated because her mom's face got so close to hers (and Jenner's hair is all over her too).

She captioned the video "the best kisses," but before posting that video, she posted this adorable photo to her Snapchat story.

What a little cutie.

On Sunday, June 10, Jenner posted a selfie with Stormi's face cropped out, and then she deleted all of the photos of Stormi's face from her Instagram.

Jenner captioned the makeup-free selfie, "i spy with my little eye..." but fans were quick to point out that Stormi was cropped out. "She cUT HER BABY OUT," one user commented. That's when Jenner responded, "Yeah I cut my baby out. I'm not sharing photos of my girl right now." She seems to be OK with posting photos of her daughter now, albeit most of the recent photos and videos she's posted don't show Stormi's face entirely. It looks like Jenner is just looking to secure her daughter's privacy a bit more.

Jenner revealed in her interview with Forbes that she's considering passing down her Kylie Cosmetics empire to Stormi.

Jenner is the cover star of Forbes' "American Women Billionaires" issue. While she's not the richest woman on the list, she is noted to be one of the youngest. According to Forbes, Jenner is worth $900 million, thanks to Kylie Cosmetics. And at just 20 years old (she'll be 21 in August), she's gearing up to be the "youngest-ever self-made billionaire." (There's lots of debate over that whole "self-made" part.)

Jenner posted the cover to her Instagram and said, "wow. i can’t believe I’m posting my very own @forbes cover. thank you for this article and the recognition. I’m so blessed to do what i love everyday. i couldn’t have dreamt this up! #KylieCosmetics." In the interview for the cover, Jenner said she's considering handing the reins of Kylie Cosmetics over to her daughter, if makeup is something she enjoys when she's older. "Maybe one day [I'll] pass this on to Stormi," she said. "If she's into it."

Jenner is already a proud mama of her little Stormi, but another proud mama is Kris Jenner.

My beauty on the cover of @Forbes! I am SO proud of you @kyliejenner and everything you have accomplished. You work so tirelessly on your business, and with so much passion. It brings me so much joy to watch you continue to make your @kyliecosmetics dreams a reality!!

"Just don't forget to Venmo me my 10 percent," is what I imagine mama Jenner said after this.