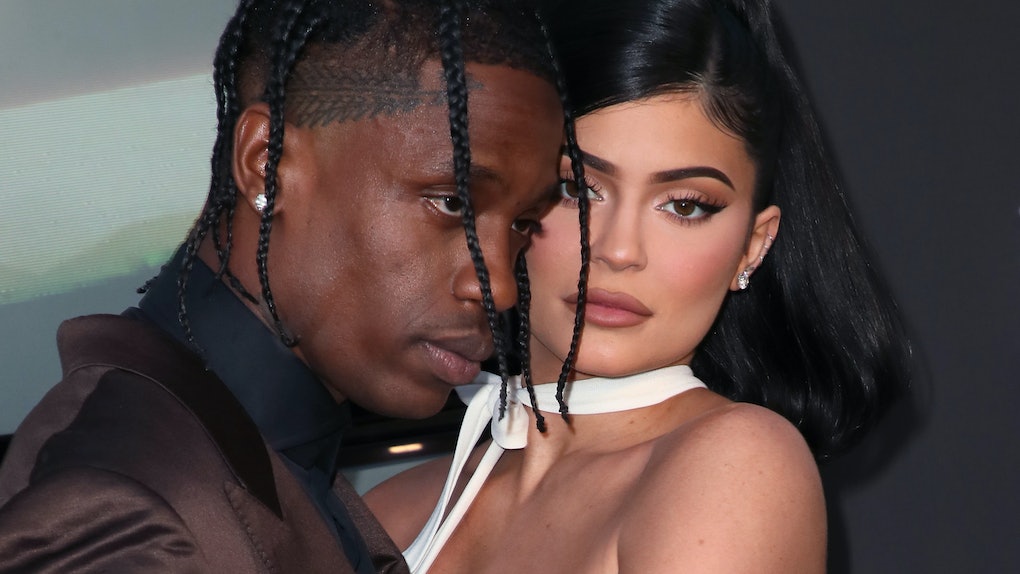 While you likely spent your Thanksgiving dodging awkward questions about your love life at your grandma's house, Kylie Jenner and Travis Scott reportedly spent their Thanksgiving flirting it up at Kris Jenner's palatial Palm Springs crib. Yes, Kylie publicly announced her split from Travis over a month ago and has since started maybe dating Drake, but it seems as though she and her ex are still reportedly cool enough to hang for the holidays. Spending Thanksgiving with an ex at your mom's house presents some obvious elements of awkwardness, but it was reportedly anything but for these two.

"The couple has always been on good terms and Stormi is their main priority," a source reportedly told Entertainment Tonight on Dec. 1. "Although the duo is spending time together and have been flirty, they're not back together officially."

They may not be back together, but their friends are reportedly crossing their fingers tight for a reunion between the "flirty" pair. "Everyone around them is hopeful they will work it out," the source reportedly added to Entertainment Tonight.

Elite Daily reached out to reps for both Kylie and Travis regarding both the claims that they spent Thanksgiving together and that they were being "flirty" but did not hear back in time for publication. That being said, there's some pretty substantial proof that the couple did, in fact, spend the holiday together.

For starters, there's the fact that they both posted Thanksgiving Instagrams from what could have very well been the same home.

Travis, on the other hand, captioned his series of solo shots:

Before and after the plate

New photog in the family

(While Travis doesn't note who the "new photog in the family" is, I, personally, would love to think little Stormi was following her dad with an iPhone 11, snapping pensive pics of him by the fire.)

The houses in the pictures seem similar, don't they? And doesn't their similar aesthetic totally look like one Kris would use for her Palm Springs pad? Food for thought, my friends.

If you're still not convinced that the two actually spent the holiday together in Palm Springs, allow me to offer you the last bit of proof: They were filmed out together at a Palm Springs casino the Friday following the holiday. Now do with that information what you will.

Unfortunately, I have no further proof regarding whether or not they were "flirty," so I guess we'll just have to wait until the next season of Keeping Up With The Kardashians to find out for sure.