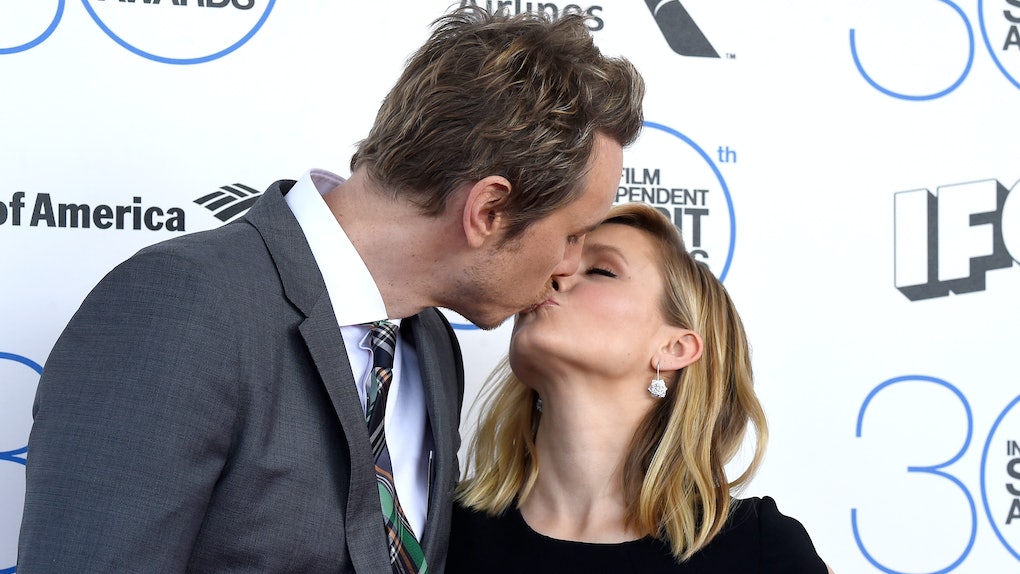 Even Hollywood's cutest couples happen to clash from time to time. All couples argue at least occasionally, and it turns out that Kristen Bell and Dax Shepard's biggest fight is pretty random. During a partnership luncheon with Lindt Chocolate and the Alliance of Moms, Bell opened up to E! News about the one thing she's never on the same page as her husband about. "100 percent color," the Frozen star told E! News. "If you go visit him on set and ask him this same question, I guarantee you he will say the exact same thing."

What does she mean about them being unable to agree on colors? "We don't see the same colors," Bell explained to Lim. "That may be because he is for sure color blind."

Specifically, there are two colors that they just absolutely cannot agree on. "We have never agreed on two things: teal or gunmetal grey," she continued.

But don't worry, you guys. This whole teal/gunmetal grey debacle isn't going to end their marriage. In fact, Bell revealed that it "does not affect our marriage, though in the moment it seems like you very much need your partner to see the same color as you."

"Once I realized, 'Oh, he's colorblind,' I was able to let it go," she continued.

The Frozen star also opened up to Lim about how she and her hubby manage to manage their busy schedules while still leaving room for self care. "We try to have the best communication possible," Bell explained. "To me, balance is a four-letter word, it's just such a swear in our house. You're never gonna feel it. You're never gonna feel balanced or right."

So they're never going to achieve balance... but they try their best to make things worthwhile by keeping an up-to-date calendar at all times. In the calendar, Bell explains "everyone adds their priorities whether that's 'I'm going to be home late this night so you gotta know that everything is on you or call a sitter' or 'I need some self-care this Saturday.'"

Based on what everyone has put on the calendar, Shepard and Bell "try to compromise" from there.

As far as the self-care stuff goes, Bell admitted that it's not usually Shepard's first instinct to take care of himself. "He doesn't instinctively put effort into [self-care], but he's always in my medicine cabinet trying my serums," she shared.

Their marriage may seem adorably perfect right now, but the two admit that they've had their fair share of bumps in the road. "We definitely had to work really hard at being a couple because we’re both incredibly, painfully stubborn, and we’re pretty much opposites," Shepard told People in March.

Their differences really came into play in the beginning of their relationship when Bell wanted to get married and Shepard did not.

"He has a great argument that the state having a piece of paper doesn’t mean he’s going to be nice to me and by my side for the rest of my life," Bell told People in the same interview. "[Rather], that is going to be evidenced by how we treat each other and the commitment that we make. I had surrendered, like, 'OK, well, I’m never going to get any sort of traditional marriage out of this, and that’s OK because I trust him.' I really, really trusted him and believed that we were going to go the long haul."

Luckily, the two were clearly able to move past the discrepancy and have since gone on to have what seems to be an absolutely adorable marriage.